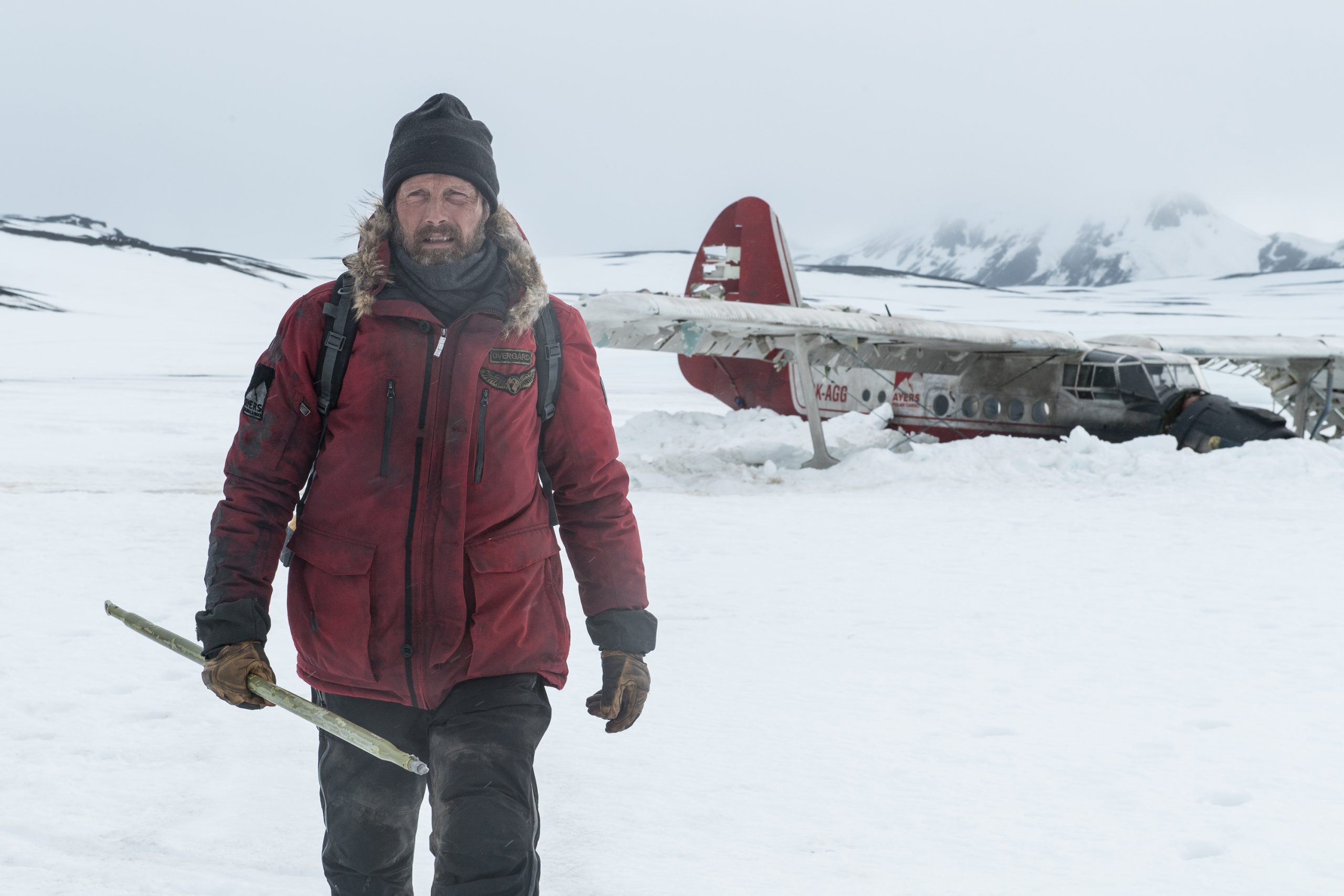 Directed by Joe Penna and released by Bleecker Street, Arctic tells the story of a man (Mads Mikkelsen) stranded in the North Pole following a plane crash, where living off of a meager diet of snow and small fish, frivolously broadcasting a poor radio signal, and endlessly awaiting rescue are the only ways to pass the time. One day, a beacon of hope arrives in the form of a helicopter, only to suddenly and irreversibly crash into the side of a mountain, and the man is faced with the immense task of keeping himself and the surviving pilot (María Thelma Smáradóttir) alive and hopeful in the unforgiving landscape.

As the synopsis indicates, Arctic is a quiet and intimate film. The brief first act, taking place before the helicopter crash, is impressive in its evocation of isolation, solitude, and (most surprisingly) sheer boredom. No expense is spared in crafting a convincing impression of emptiness; the broad landscape shots are a sight to behold, especially in a theater, but it’s the near-dead silence of it all that is especially effective. Within minutes, Penna is able to efficiently convey to the viewer that this man has been here for god knows how long, doing the same thing every day with no one to talk to, making for an affecting and sensory stagnation.

Something I’ve been learning rapidly as I age is that having ‘nothing to do’ becomes less frequent with every passing year, and that it should be cherished (or perhaps avoided, depending on your personality) at all costs. Watching this slow sequence play out, in contrast with the hustle and bustle of everyday life, was immensely refreshing and peaceful to me. I’m somewhat of an antisocial person, so the thought of complete isolation and monotony often crosses my mind, and seeing it play out, if only for a short time, gave me an experience I didn’t know I needed. It’s an uneventful sequence to be sure, but it’s uneventful in the same way that a dentist’s waiting room is. Nothing’s really happening, but there’s plenty to look at, and it’s a useful period of downtime on the brink of something nerve-racking and memorable.

The nuance and complexity of Arctic kicks into full gear as soon as the helicopter crashes, where after an extended reaction shot, the man runs to the wreckage to assist the survivors. One of them appears to have died in the crash (the film is admittedly a little heartless toward this character), and the other is quickly losing blood—and consciousness. The man uses the onboard medical kit to bandage her wound and makes a makeshift sled to transport her back to the crashed plane. The film immediately adopts a far more urgent tone, as it quickly becomes a story about human nature and how compassion and companionship can drive us forward. That’s not to make the film sound sappy or sentimental, but rather it’s presented realistically (and perhaps somewhat wishfully).

There are a handful of recent survival thrillers one could compare Arctic to (Cast Away, 127 Hours, Gravity, etc.), but there’s a contentment to the initial situation that those films don’t have. It isn’t until someone else’s life is in the man’s hands that he recognizes the seriousness of the situation, and he decides to take the initiative and make major steps in the direction of success (in the form of making a risky expedition to a far-away base). The woman, who is unconscious for most of the runtime, provides the soul of the film, and it becomes clear that companionship, romantic or otherwise, is what makes us human. If that helicopter had never arrived, the man could have lived out the rest of his days feasting on salmon and staring into space, but that irresistible empathy can give us purpose, in spite of the negatives that come with it. I saw this as very aspirational, but I do acknowledge that it could easily be viewed as something of a naive film in that regard.

From a more cinematic standpoint, Arctic is not without its flaws. Most of it runs off of the suspense inherent to the premise, and as a result it does tend to drag and fall into the occasional lull (though some of its meditative moments are more than welcome). It’s almost completely silent, and the filmmakers occasionally give in to the temptation of including snippets of dialogue, and I wish they hadn’t, because I found it to be unfortunately disruptive to the atmosphere. Worst of all, the ending (perhaps inevitably) feels a tad bit underwhelming, and although it didn’t ruin the film by any means, the final shot felt like a cheap, age-old cinematic copout. All that said, the positives do end up outweighing the negatives by far, and it makes for a unique, even contemplative theatrical experience.