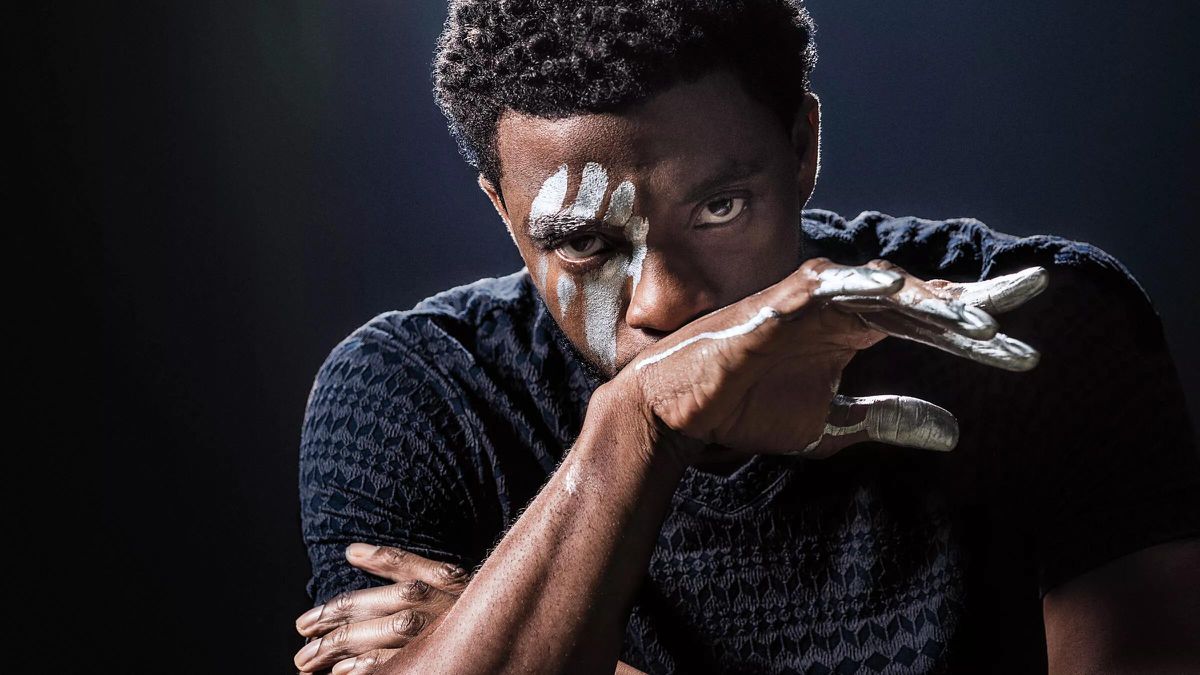 On August 28, 2020, the world stood still. As I sat in a diner, patiently awaiting my “breakfast for dinner,” I did what every person nowadays does when there’s nothing else to do: I checked my phone. The first thing I saw when I opened Twitter and looked at my timeline was the most shocking and heartbreaking news I never knew I wasn’t prepared to hear. Chadwick Boseman, star of Black Panther, was dead at 43. Boseman passed away peacefully, surrounded by his wife and family, according to the statement made on his official Twitter account. I sat there in shock and disbelief, hoping and praying that this might be some sort of joke. That maybe his account had been hacked, or I was stuck in some sort of lucid dream. It didn’t take long for the swarms of tweets and replies full of the same amount of disbelief to come in, as well as the responses from those who knew him or wished to know him more. Then I realized it was real.

The world lost a person of immeasurable talent and value, and as news of his passing reached more and more people, it became clear just how impactful he truly was. The words at the beginning of this article were spoken by Boseman last year during the AFI Lifetime Achievement Ceremony in 2019. He said them during a speech for Denzel Washington, who was accepting the award at the time.

I struggled to find a way to start this article, a reason to even write it. I knew it wouldn’t reach many, and I felt like I didn’t know Chadwick Boseman on a personal enough level to write something about him. I didn’t feel worthy of putting pen to paper (in the rhetorical sense) and detailing my thoughts on the subject. It wasn’t until I watched his speech, until I saw him honoring the man who essentially paved the path for his success, that I realized why I wanted to write about him in the first place. When Boseman said his speech and spoke the above words, he was paying tribute to a man who, without ever even meeting him, saw potential in the young actor. He was honoring a man whose very legacy opened doors that Boseman assumed would stay closed forever.

For the past 48 hours, I — like many others mourning over this tragic loss — have been spending my time looking back at the life that Chadwick Boseman lived and the legacy he created. Boseman grew up in South Carolina with a love for theater since the day he could write and speak. He wrote his first play in his junior year of high school, and then he attended Howard University, graduating in 2000 with a degree in Fine Arts. It was during his time in college that he attended the Oxford program of the British American Drama Academy in London, a program funded heavily and discreetly by Denzel Washington. These are all things you can read about on his Wikipedia page, so I won’t spend too much time reiterating the words written there about his early life. Though it is important to know a little about his younger years to understand the person he grew up to be. That said, seeing is believing. And Boseman did more than enough to prove himself through the actions and decisions he made over the course of an incredible career.

Many know Boseman as T’Challa, the Black Panther, who debuted in 2016’s Captain America: Civil War. This was two years after it was announced that Boseman would portray the character in the movie and in a solo film some time after. In 2018, Black Panther premiered, and Chadwick Boseman changed the comic-book movie game. For the first time, a black superhero was in the spotlight, front and center in his very own billion-dollar blockbuster. History was being made right in front of us, and thanks to the efforts of Boseman, director Ryan Coogler, and the rest of the phenomenal cast, millions of young, African-American children had someone new to look up to. And it wasn’t just kids, but adults such as myself who were finally able to see themselves on screen.

I can’t tell you how incredible it was to see Black Panther on opening day. My local theater couldn’t handle the turnout. Lines were outside the door as people of all shapes, sizes, colors, and ages waited ecstatically to see something unlike anything they’ve seen before. It was even crazier when the movie ended, and it became clear what Boseman had just given us. Black Panther wasn’t just an amazing movie, it was an amazing display of culture. A culture that many American audiences had never seen, especially not with such a high caliber of talent involved. Boseman and Coogler worked together to create an in-depth look specifically at African and African-American culture, to tell a story that moved beyond the classic tale of hero vs. villain. A story about life and family. About embracing who you are, where you come from, and never letting the world’s view of you define who you are. Even the antagonist, Killmonger (played by Michael B. Jordan), wasn’t your run-of-the-mill supervillain, but rather an embodiment of the hardships that African-American men and women face on a daily basis. As Boseman said it so elegantly, T’Challa and Killmonger were “two sides of the same coin.”

But this isn’t really an article about Black Panther, though I could go on about that film for hours. This is about the man behind the mask.  It can be hard to separate Chadwick Boseman from T’Challa. After all, in the same way Robert Downey Jr. IS Iron Man, Boseman IS Black Panther. But if you look beyond his incredible performance as T’Challa, you’ll find that Chadwick Boseman was just as much a hero in real life as he was on screen. Perhaps even more so.

Boseman was diagnosed with stage three colon cancer in 2016, a fact that many only recently found out due to his untimely passing. He hid his illness from practically everyone, with only immediate family knowing the truth. This meant that throughout the biggest moments in his career, Boseman was ill. He was ill while filming Black Panther, 42, Get On Up, and several other recent projects including 21 Bridges and Da 5 Bloods. He was ill while honoring Denzel Washington and giving back to the students of his alma mater at Howard University, inspiring them in the same way Washington did for him. Even while he was visiting cancer patients in the hospital and doing all he could do to instill them with hope and strength to carry on, he himself was battling something inside that not everyone could even begin to imagine.

I couldn’t believe it. I asked myself how? How could someone go through that for four years? How did he find the strength to get up every day, perform his lines, train for his roles, make appearances, all with a smile on his face and a genuine love for his craft? How was he capable of everything he accomplished knowing what he knew? I remember thinking that there was absolutely no way I could have done the same. That was, until, a friend of mine reminded me of a simple fact that had been staring me in the face all along.

Chadwick Boseman had hope for a brighter future. He had hope for a stronger generation, one that could truly change the world and make it a better place. Every single aspect of his career, every decision he made, every word he spoke, reflects his ideals. When he spoke with fans, he always smiled for pictures, hugged them, and made them aware that he was just as happy to meet them as they were to meet him. When auditions took place for Black Panther, he attended every single one that he could. He rehearsed with Winston Duke and Letitia Wright before they even got their respective roles. He made an effort to bridge that gap between performer and human being, never once turning his back on the community that raised him. The very community that he aimed to represent. Boseman didn’t do all that he did during his career because he thought he was the only one who could do it; he wanted us to know that anyone can. He wanted to show us that we all have that same strength and drive that pushed him through every day of his life. Just as he was inspired to follow his dreams, he wanted to be a beacon of hope for every young person of color who dreamed like him. At least, that is the message I took from both his career and his life, and if that’s the case, I believe he succeeded.

Like I said before, I never knew Chadwick Boseman. I’m envious of those lucky enough who did, who are currently posting amazing stories and memories and celebrating his life in more detail. But that doesn’t mean he didn’t affect me and my life in a very big way. I think the same can be said for millions of others as well. The proof is all over the internet, through the many tweets honoring him, the stories fans are sharing about how seeing him on the big screen changed their lives. Chadwick Boseman was a hero, a modern-day Superman who never did it for the glory. He did it so that one day we would have the chance to do the same. Like his hero, Denzel, he opened doors that can never again be closed. He paved paths that we can all walk on. He believed in us, even if he had never met us.

We are living in a very difficult time to say the least. For me and many like myself, it isn’t easy finding the strength or the ambition to do much of anything right now. And even worse, if you do find that strength to pursue your passion, going out to do so is pretty dangerous at the moment. In our darkest hour, individuals like Chadwick Boseman are absolutely necessary, and though he may not be with us, his legacy will never go away. Not as long as it lives in all of us.

If you would like to help us honor the memory of Chadwick Boseman, please consider joining us in supporting the Starlight Children’s Foundation. Boseman supported this charity in 2018, which strives to bring joy to seriously ill kids. Learn more about Starlight and how you can donate here.