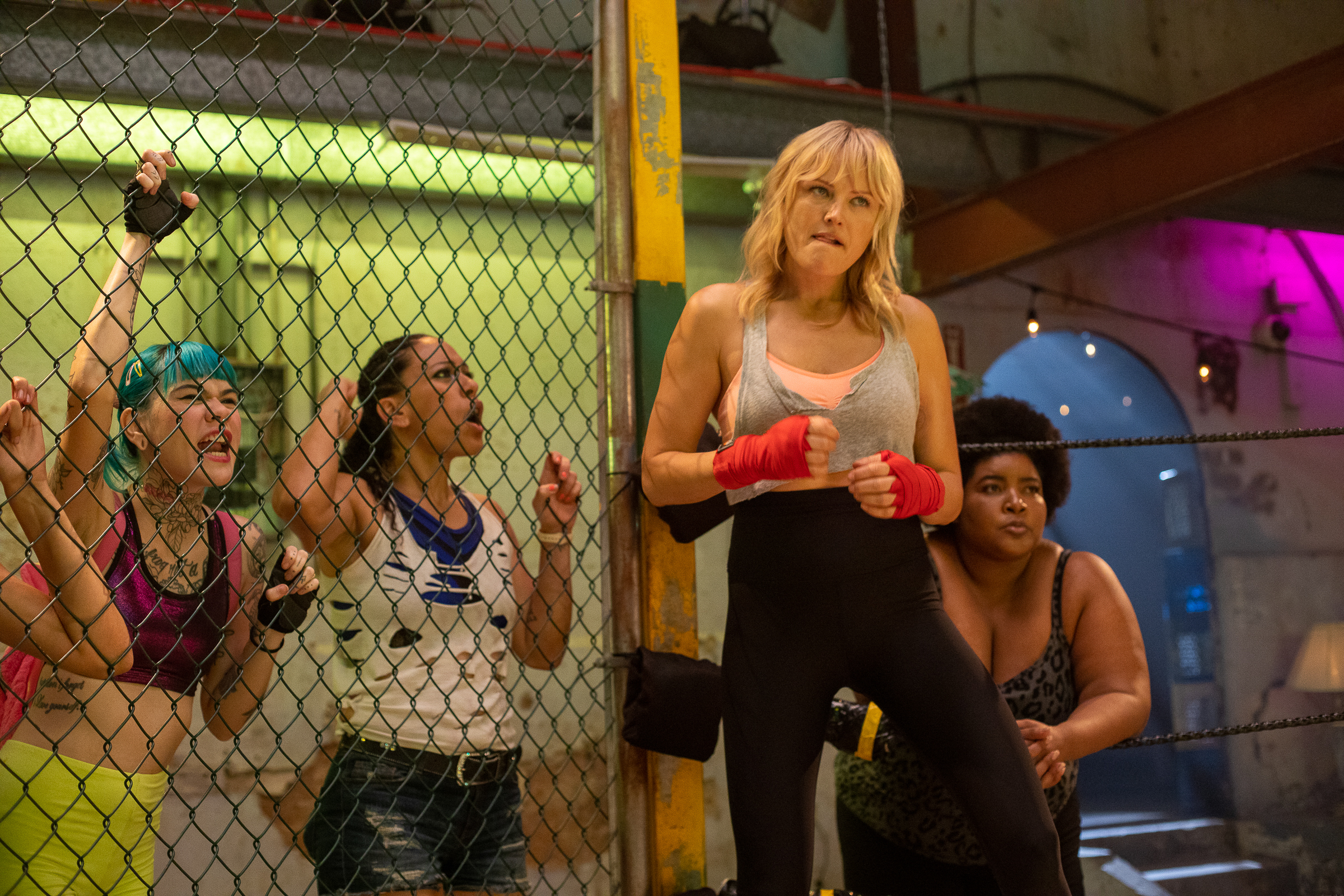 By Lizzie CombsNovember 10, 2020No Comments

The success of 2011’s Bridesmaids proved female comedies featuring the kind of bawdy, scattalogical humor typically seen in male-led comedies could lead to box office gold. In its wake came a wave of Bechdel-test-passing, R-rated comedies of varying degrees of success, including the smash hit Girls Trip in 2017. Chick Fight feels like the product of Bridesmaids-effect. The women of Chick Fight don’t give a damn about being “ladylike.” They’re badasses! They’re sexual like Melissa McCarthy in that plane scene! The romance is a side plot! But the movie lacks what set Bridesmaids and Girls Trip apart: authenticity.

The story centers around Anna, played by Malin Åkerman (Watchmen, 27 Dresses). Anna is in a funk. She can’t pay the bills, her car is being repossessed, and she’s on an “epic streak of sexual futility,” as her best friend Charleen (Dulcé Sloan) puts it. “Self-imposed abstinence,” Anna argues. Charleen is a sassy, Black, lesbian cop who speaks in one-liners as if doing standup rather than speaking to a real, human person with whom she’s meant to have chemistry. Things go from bad to worse when the coffee shop Anna owns gets burned down in a fire. Anna, of course, doesn’t have insurance.

It turns out Charleen and a woman named Bear (Fortune Feimster) run a secret females-only fight club. You can kick, punch, and head-butt. But no hair pulling or eye gouging “’cause then you’re being a bitch,” screams Bear. Don’t be fooled, though. It’s empowering. “This isn’t just a fight club, Anna, this is a shelter,” explains Charleen. “A safe haven.” Anna wants to leave, but she is forced into the ring. Safe haven or not, she’s instantly KO’d.

When Anna comes to, she meets Dr. Parr (Kevin Connolly), the handsome fight club doctor who quickly becomes Anna’s love interest. That’s also when it’s revealed her mother was the founder of the club. A convenient memorial video explains Anna’s mom, a therapist, started the fight club for her patients, and it supposedly allows women to face real fear, let go of anger, and express themselves. “When men punch each other it’s normal. We women feel the same way but society has house trained us to cry our shit out,” Charleen says in the video. “You have helped me and a lot of other women find the strength to live our truth.”

We should take a moment here to acknowledge that no, it’s not normal to punch each other. Men, don’t punch each other! And mental health professionals, please weigh in on how a therapy that leaves patients with concussions and broken bones (and also forces people to participate against their will) helps them “live their truth.”

This is the part where Anna should go running for the hills, but instead she ends up challenging Olivia (Bella Thorne), a ruthless fighter who doesn’t care about therapy and wants to “change the club’s ethos,” making it about real fighters “not basic bitches,” she says. Olivia could literally kill Anna, we’re told, so Anna needs a trainer. Enter Alec Baldwin.

Baldwin has never phoned it in more than in this performance as Jack Murphy, a character who could not be more disconnected from everything else in the film. While the rest of the movie takes place in the city, Baldwin’s scenes are all at some tiki bar on the beach. It’s fair to assume he filmed his part in a couple of days, at most. Still, Alec Baldwin playing Alec Baldwin is more fun than most of this movie. A couple training montages later, Anna is ready for the big fight. We won’t spoil the ending, but thanks to some heavy-handed foreshadowing, you can probably guess how it goes by about half an hour in.

Some things that work in Chick Fight: The soundtrack is fun, we get some great slow-mo blood spatters, the fights aren’t overly sexualized, and it’s mercifully only 90 minutes.

But here’s the problem. Representation is not enough. It’s not enough for a film to be about women. It’s not enough to star minorities (this review didn’t even get into the side plot about Anna’s sexually fluid dad and his boyfriend). The mere nod to the existence of minorities is not empowering. These stories only work when they represent minorities as authentic, fully-realized humans. The film makes little attempt at giving insight into the female/Black/queer experience.

I mentioned the lack of chemistry and stilted dialogue between Anna and Charleen; I don’t blame the actors. Chick Fight is directed by Paul Leyden from a screenplay by Joseph Downey. Two men who may or may not have ever met a woman. Malin Åkerman, serving as both star and a producer, tries desperately hard to make Anna’s experience feel meaningful, but the movie works better as a fluffy bit of fun. Its eager attempts at wokeness make it condescending, and the script repeatedly falls short of any genuine human emotion — the authenticity which made Bridesmaids and Girls Trip effective.

Girls Trip not only starred Black women, it was written, produced, and directed by Black people. It wouldn’t have worked any other way. Bridesmaids was written by two women, Annie Mumolo and Kristen Wiig. For a film about girl power to be anything more than patronizing, the girl power has to extend behind the camera, too.