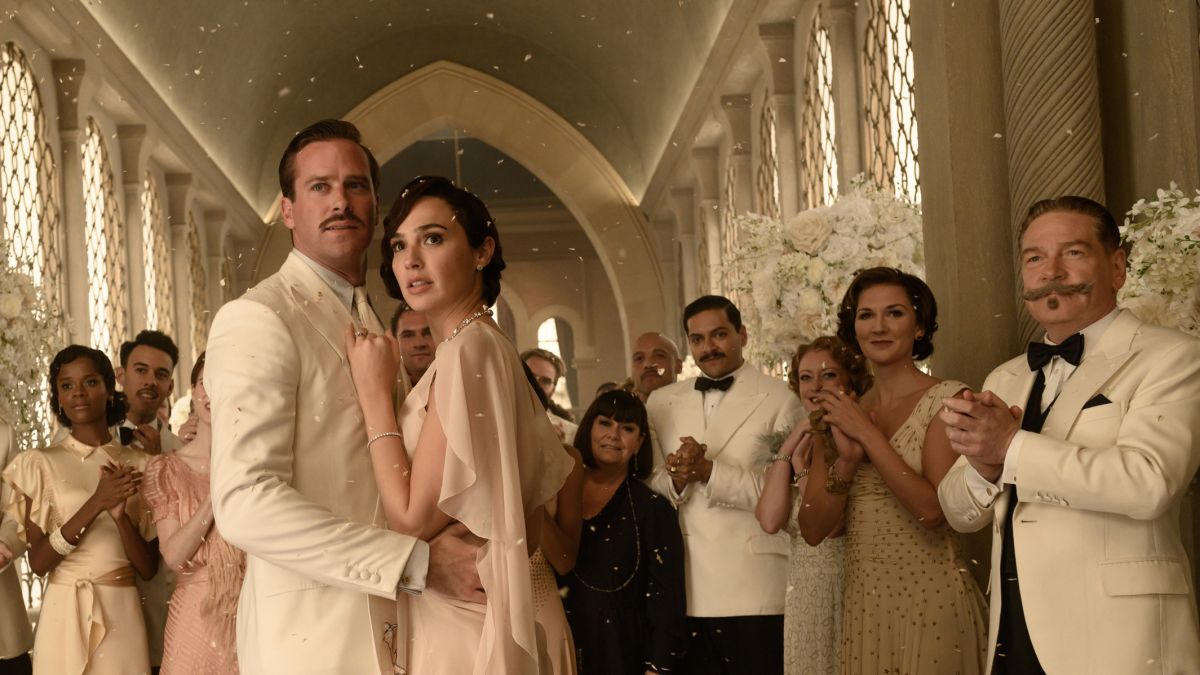 By Jon NegroniFebruary 10, 2022No Comments

The following review of Death on the Nile is an edited transcription of the video above.

Death on the Nile is a new period-drama-mystery thriller directed by and starring Kenneth Branagh as the iconic Hercule Poirot, a private detective who is essentially Sherlock Holmes if he went on luxurious, international vacations. This is the direct follow-up to 2017’s Murder on the Orient Express, also with Kenneth Branagh running the show, and both of these films are adaptations of the novels by Agatha Christie, hence they take place in the 1930s.

This is the third screen adaptation of this specific Agatha Christie whodunnit, the first one being a 1978 film with a similar, all-star cast that includes Maggie Smith, Bette Davis, Angela Lansbury, and Peter Ustinov. Plus, there was an episode of the TV series, Agatha Christe’s Poirot, which covers this narrative as well. I went into 2022’s Death on the Nile without having read the novel or watched the show or movie, so unlike Murder on the Orient Express, I had an opportunity to experience the film without knowing who the killer is from the start.

That’s probably a significant factor for why I surprisingly found this first-time viewing of Death on the Nile to be tremendously more satisfying and engaging than the previous film, even though it doesn’t really look or feel all that different on the surface. As you can expect, the story follows a surprise murder aboard an upscale paddle steamer sailing the Nile in Egypt, though the titular death doesn’t happen until well into the movie’s extended first act, which involves an overbearing entanglement of all the various characters who may have done the deed and had a compelling reason or two to do it.

And yes, Poirot is onboard as well, sort of silently obligated to solve the mystery since he’s there, anyway, and amidst the interviews and murderous accusations, we dive much deeper into Poirot’s psychology, backstory, and motivation as a detective who is obsessed with solving puzzles. Why does he do what he does for a profession? What’s the real wound of his past that pushes him to be this eccentric loner who can’t seem to sit still? Death on the Nile has its fair share of stakes and emotional development for Poirot, more-so than any other character in this sequel, which is a big reason why the film doesn’t sink under its own weight.

The rest of the cast includes a newlywed couple named Simon and Linnet, played by Armie Hammer and Gal Gadot respectively, whose honeymoon excursion has attracted a host of friends and family members to join them for an expedition to the Temple of Karnak. Every step of the trip so far, however, they’ve been stalked relentlessly by Simon’s ex-lover, Jackie (played by Sex Education‘s Emma Mackey), who was originally engaged to Simon before fatefully introducing him to Linnet.

There’s also Tom Bateman as Bouc, who is the bridge between Poirot and Linnet’s social circle, as well as Annette Bening playing his mother, a painter named Euphemia. Letitia Wright plays a childhood friend of Linnet’s named Rosalie, and Sophie Okonedo plays her aunt, a jazz singer named Salome. Russell Brand, Rose Leslie, I could keep going but you get the picture. There are a lot of usual suspects, and they’re almost all played by recognizable actors in what is absolutely a tighter cast in an even tighter location.

The sharp writing is there—Michael Green does the screenplay and this is Christie, after all. Most of the performances are convincing enough, and some are even quite good, almost distractingly so thanks to Okonedo in particular. And as I mentioned before, there is a stronger, meatier through-line connection between Poirot’s past and present, which drives the story to a destination that is as interesting as the pulpy crime intrigue everyone came for.

The problem, as before with Murder on Orient Express, is Branagh’s performance as Poirot. This is a delicious meal of a role for any actor to fill, but for whatever reason, Branagh plays the part like he hasn’t slept in days, and he probably hasn’t while pulling double duty as the star and director. This can be done successfully, of course, but it’s hard not to wonder what else could be the reason behind his Poirot being mostly stone-faced and dull to watch about 75% of the runtime, with only the nary quirk or burst of inspiration to peek through all that facial hair. You’re asking the audience to engage with a protagonist whose cartoonish mustache seemingly exists in a different movie than the actor wearing it.

The second and third problems are the sound mixing and general look of the film. Much of the dialogue is mushy to hear through these forced accents, particularly when characters are rapidly spouting exposition with a French affect, making it frustrating to catch important details in order to play along with Poirot. This can be solved in the future with subtitles, thankfully, but the cinematography won’t be quite so lucky. When shot with practical effects, like sweeping camera movements up and around the ship—which is a far more memorable and hypnotic location than the last film’s ho-hum passenger train—but also establishing shots dwelling on the pyramids of Giza and the wonders of Ancient Egypt, adding to that unique flair and sense that we’re in a part of the world where anything can happen.

But often, the sets suddenly shift to obvious green screen and the dropping in of uncanny visual effects to mask that characters are now banting about on a sound stage. For such an old-fashioned aesthetic, it boggles my mind why more directors don’t consider returning to or at least updating the use of matte paintings as backgrounds, to sort of add that grandiose, pristine, even operatic atmosphere that may not be more convincing, necessarily, but at least it’s a stylistic choice.

As for the mystery itself, the film does its job leaving the right breadcrumbs and rewarding observant viewers. I didn’t predict every detail of the revelation, but I got enough right that I felt at least a little smart, though it’s hard not to imagine most people figuring out at least 50% of what’s really going on and why. But that’s the secret behind these movies and Christie’s mysteries at large. You’re supposed to get so immersed into this world, so involved with the characters as they get intertwined with each other, that you’re not even taking the time to really step out of the movie and use your brain to put the pieces together. Death on the Nile is one of those rare movies where “turning your brain off” during the runtime might actually be the smart move.

Death on the Nile opens in theaters this Friday, February 11. Watch the trailer here.