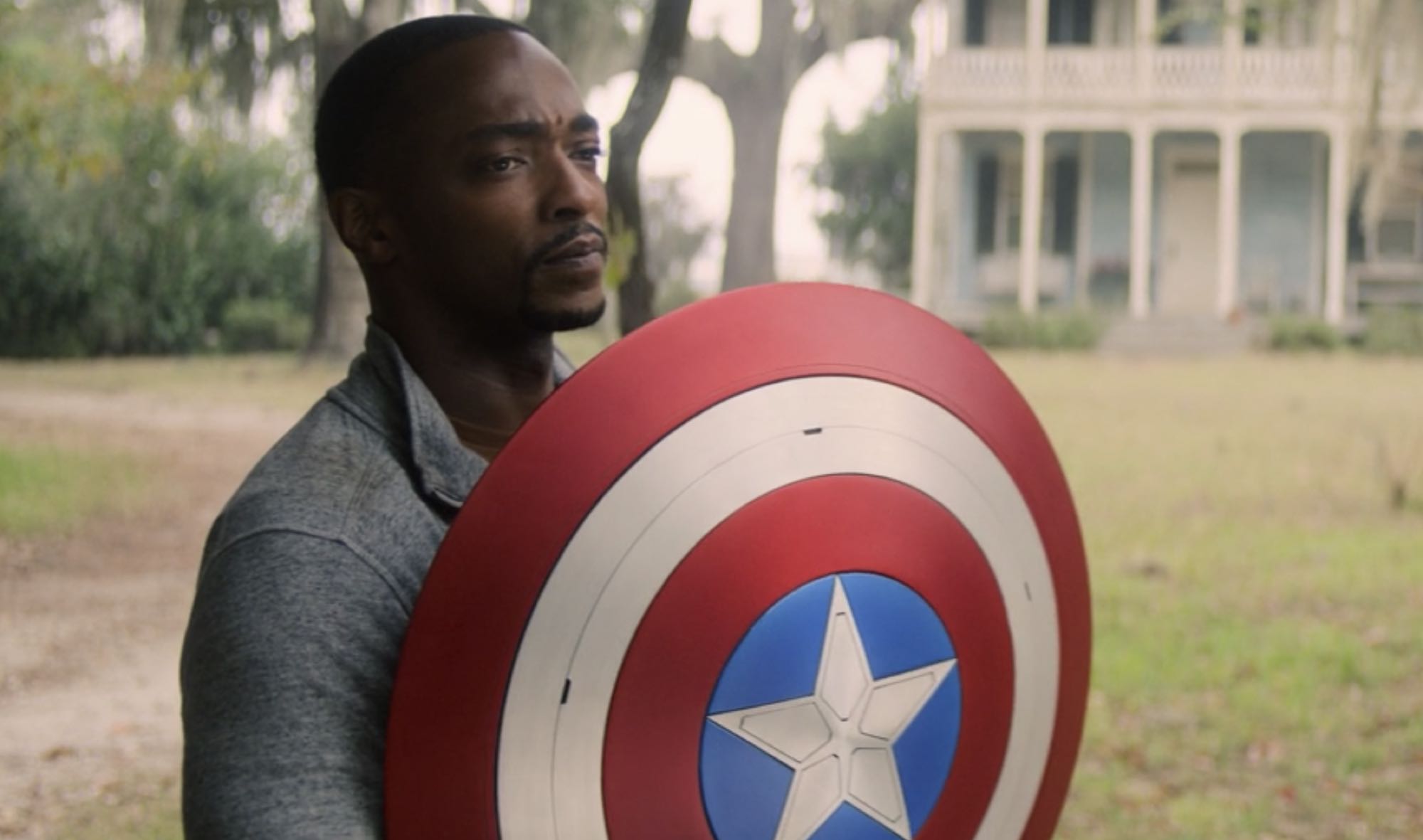 The biggest problem I’ve had so far with these weekly recaps of “The Falcon and the Winter Soldier” is deciding which aspect of the episode to focus on. With each episode passing the 45-minute mark (and some like this week’s being over an hour), there’s just so much to unpack.

I considered doing multiple articles an episode, dedicating a piece for every interesting or noteworthy angle to address in each episode. I may still do that in the future, but for now, I’ve decided to stick to what I consider to be the heart of this episode, though it’s a bit of a shame it took TFATWS five out of its six episodes to properly discuss it.

WARNING: SPOILERS FOR “THE FALCON AND THE WINTER SOLDIER” EPISODE 5 BELOW!

The fifth and penultimate episode of TFATWS is called “Truth,” and that’s certainly no accident. After leaving us for an entire week with the final image of Cap’s blood-soaked shield stuck in our minds, TFATWS replaces it with even more memorable scenes and heavy imagery. Each of them are arguably just as hard to swallow as John Walker’s closing scene from the week prior.

There’s plenty of material to choose from here. From the aftermath of Walker’s war crime and Zemo’s fate to the much-appreciated scenes between Sam and Bucky as they enjoy some downtime while fixing Sarah’s (Adepero Oduye) boat. But the moment tying these scenes together to the series, along with the final moment of the episode, comes in the form of Sam’s poignant discussion with Isaiah Bradley.

Isaiah (Carl Lumbly) is a character I was seriously hoping the show would delve into deeper since his appearance in Episode 2. Though it took far longer than it really should have for the show to return viewers to Bradley’s doorstep, it finally happened this week, and man was it intense. In fact, “intense” doesn’t even seem to begin to describe the events that transpired in this scene. “Heartbreaking,” maybe. “Devastating,” perhaps. But the one word I wish I could use is “surprising.”

Like every young, Black person in America, I have the heavy and often challenging burden of constantly being aware. Not just of the world around us as it exists today, but also the history of the country we reside in. There’s no denying America’s dark past and how said past is relevant to America today. Isaiah’s recounting of his time as the government’s Super Soldier right after Steve Rogers is nothing short of horrifying, and it mirrors the MCU’s troubled history with our own.

Though the historic mistreatment of Black soldiers by their own military isn’t a lesson Sam needs to learn, it’s a moment of education for the Avenger, nonetheless. Reminding him, and us, of the somewhat privileged position he finds himself in. After all, Sam Wilson is an Avenger, as well as a very good friend of the “First Avenger”at that.

But Sam is still a Black superhero in America. A fact not lost on him one bit, and it’s the main reason why Isaiah doesn’t approve of him taking up the shield. For the longest time, since Captain America’s comic book debut, we’ve viewed the shield as a symbol for several things. Truth, justice, and the American way (to borrow Superman’s catchphrase) all resided within Cap’s shiny symbol of patriotism when his first run of comics inspired real-life Americans during WWII. Though Steve Rogers is a legend among superhero names today, his shield has a legacy just as strong.

This intimidating legacy was thought to be the only reason for Sam’s reluctance to follow in Steve’s footsteps, but his talk with Isaiah proves there’s far more to his hesitance. For the longest time, Steve Rogers was the face of America in the MCU. In many ways, he still is. I think it’s safe to say there’s a pretty good reason, beyond his medals, why John Walker of all people was chosen to replace Steve as Captain America. Both men share the traits that America looks for in representation according to Isaiah: blue eyes and blond hair. It’s a reference to the “Ubermensch” of Nietzche conception. Quite literally a “Superman,”or the supposed ideal representative of humanity’s peak.

In truth, the only thing separating Steve Rogers from his Nazi-approved, Aryan-based looks are his personal beliefs and the flag he represents. Rogers was a banner for American pride and culture, a herald for the red, white, and blue. To go against that ideal appearance, and to try and be that beacon like Steve, is a crime that Isaiah experienced the repercussions of first-hand. The hypocrisy showed itself when Isaiah was sentenced to jail for doing the same things Steve did during WWII, and the subsequent erasure of his history was a direct consequence of rescuing fellow captive soldiers deemed as disposable. Again, Isaiah’s actions were almost identical to Steve’s in Captain America: The First Avenger, when Bucky and several other soldiers were captured and eventually rescued by a single man. But Steve was met with applause when he came back, not any severe punishment.

After finally getting Isaiah’s full story, it’s easy to understand why the veteran has so much disdain for the government and even the symbol of Cap and his shield. Where others see a symbol of patriotism and heroism, Isaiah sees a painful reminder of why the same people who create heroes can also destroy them. Isaiah was a hero who was never called one. There were no parades for him, no celebration.

He wasn’t dubbed one of “Earth’s Mightiest” or awarded for his service. Instead, he was experimented on, tortured, and cast aside, just another forgotten piece of America’s history, bastardized from the country that made him in the first place.

His story is a wake-up call for Sam, who before hearing it was certain that Isaiah could comfortably make his presence known to the modern world. Unfortunately, it isn’t that easy. Isaiah’s life has been wiped from America’s records, an act made by several of the country’s higher-ups, who even now most likely have the influence to keep it that way.

What’s more, Isaiah struggled with the same thing Sam is struggling with now: carrying the weight of Steve Rogers’ world on his shoulders. It’s a weight that Isaiah has since let go of, and he urges Sam to do the same, insisting that the world isn’t ready for a “Black Captain America.” And the thing is, he’s right.

Looking around at the state of the world today, it’s more than disheartening. Mass shootings occur more often than episodes of this show are released, and they’re met with the same level of expectancy. Stories about Black people — even children — dying in the streets for reasons that in any other instance would be considered less than misdemeanors, but here are treated as just cause for execution.

After eight years of having our first Black President, America immediately elected a replacement who practically spat in the face of every value and moral this country claims to uphold. Like I said, it isn’t surprising in the slightest that Isaiah Bradley suffered the way he did, or why when he saw Sam walk in with Cap’s old shield, he all but begged him to just destroy it.

But then Sam did something incredible. Something that I truly believe was the best choice he could have made. He picked up the shield. In a sequence that confused me at first, Sam decides to keep Steve’s shield and begins training with it, seemingly preparing for his role as the new Captain America. It was confusing because the show had spent so much time before this moment explaining why a Black man picking up the representation of America is almost an act of self-hatred in the eyes of Isaiah. But it was a good decision on Sam’s part because ultimately, it was his decision.

I often struggle with the seemingly polarizing history of Black pride versus the concept of the American Dream. America is touted as the land of possibility. A safe haven full of potential wealth, success, and equal opportunity for every citizen. But for many of its residents, life in America has been the exact opposite of what our forefathers promised.

How can we show pride for America and hold it to such a high regard when we know the truth? How then can Sam pick up that shield while knowing Isaiah’s story? A story that resonates so deeply not just with his generation, but with a newer generation like mine, as we’ve had to learn about the struggles our parents and their parents before them have had to endure on a constant basis?

How can he be ready to call himself something his own country, in all honestly, doesn’t want to call him?

Because he knows what he wants, and he knows what’s right. It’s true, the America we’ve been promised since its founding is not the hand we’ve been dealt. But those values, that idea of equality and fairness for all, is something Sam believes is worth fighting for.

At the end of the day, it can’t be Isaiah’s decision whether Sam picks up the shield or not. It can’t even be Steve’s. The story of these two men helped shape Sam, mentoring him and shaping his heroic ideaology. But at this point in Marvel’s ongoing story about Captain America, it has to come down to what Sam decides to do.

I don’t think Isaiah is wrong at all. His story rings true, and it represents a dark part of America that isn’t gone, just dressed up a little differently these days. But Sam isn’t wrong, either. His decision doesn’t betray Isaiah or discredit his history. Rather, Sam is acknowledging the history that Isaiah and countless others have lived, and he’s deciding to put it on full display. He’s remembering the past and working for a better future. Becoming not a hero who represents America, but one who represents what America has always claimed to be.

We’ll see how America responds to that sentiment, both in real life and in the MCU, when the sixth and final episode of “The Falcon and the Winter Soldier” premieres on April 23.