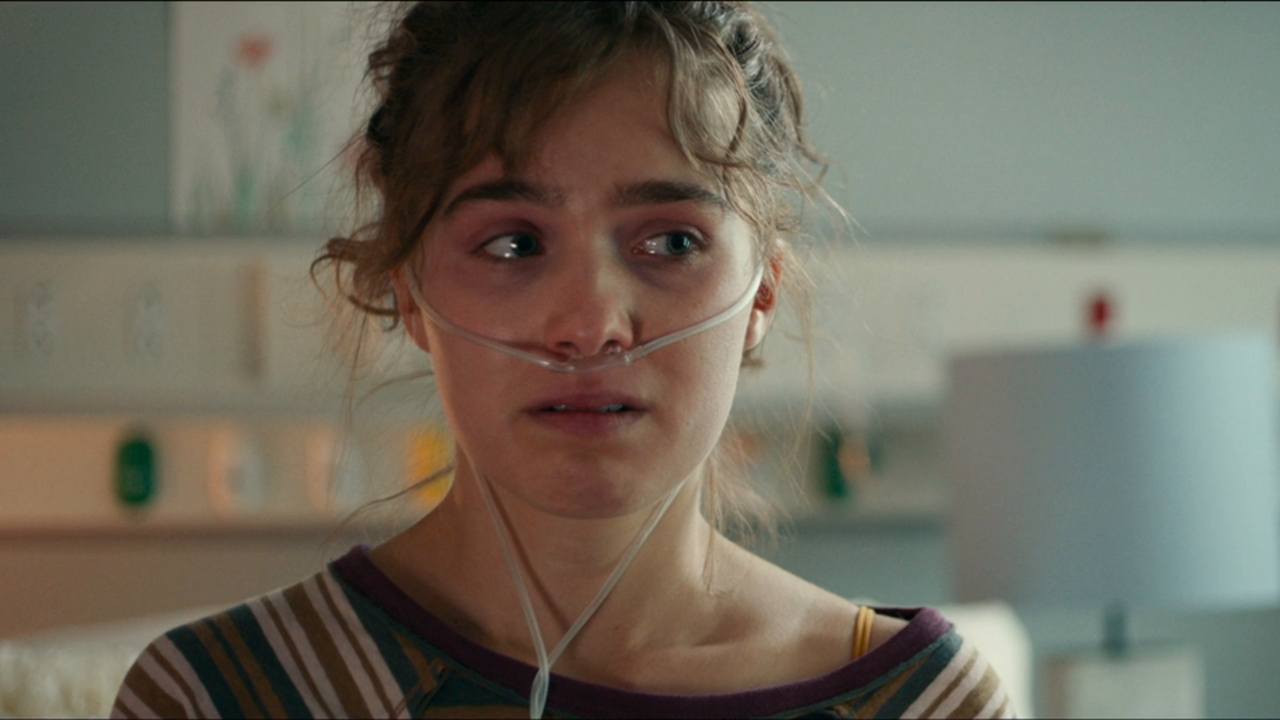 Never doubt the power of great acting. Even when the material might falter under flimsy pretenses, half the battle is already won if you have an ace actor reading your lines. In fact, there are several cases in which the actor saves a film from its dreaded writing — resulting in a final product that might not touch upon greatness, but at least veer closely toward goodness. For a grand stretch of its runtime, I felt that was the case with Five Feet Apart, the soapy, emotional, wishy-washy young romantic tale from director-producer Justin Baldoni, now making his narrative feature debut.

Specifically, I found the lead performance from talented up-and-coming actress Haley Lu Richardson (Edge of Seventeen, Split) to be impressive, challenging, deeply likable, and completely captivating. I began to wonder if the limitations of this mediocre movie would be overcome by her part in it. Could this exceptional performance in this unexceptional movie salvage the whole experience?

But then, as the film continued onward and its great failings became greater, I began to drift farther and farther away from any appreciation. And despite its charms, I never reconnected.

Despite what my brain wants to tell me, Five Feet Apart is not based on a young adult novel (Side note: it’s all the more confusing because they made a novelization and released it at the end of 2018). The story is centered around Stella Grant (Richardson), a bright and motivated teenager who cannot live her fullest life due to the limitations of her cystic fibrosis (CF) diagnosis.

Inside a high-end hospital where some of the best modern medicine is working to keep young folks with CF alive, the energetic teen finds herself eager to take on the world, even if her body is unable and unwilling to match her active mind and imagination. Due to a tragedy, Stella is part of a fractured family, and though she has friends — and an active fan-base on her YouTube channel, which allows for slightly less clunky exposition than we’re used to getting in these films — her only confidants are Nurse Barb (Kimberly Herbert Gregory) and Poe (Hannah Montana’s Moises Arias), a life-long homosexual friend of Stella and a fellow CFer (as the characters call themselves).

Stella isn’t lonely, but she hasn’t experienced the same life progressions as other women her age. And with a limited window of time and her life being constantly in a state of imbalance, she doesn’t know if she’ll ever, say, fall in love or discover the dizzying heights of romance. At least, until she meets Will (Cole Sprouse).

A moody, dark-humored, and talented CFer artist, Will tries to start a correspondence with Stella, but it isn’t easily achieved. While Will is always quick to note that death is constantly rearing its head around their corridors, it takes time before Stella is won over by Will’s charms. As love begins to form between these two youngsters and bring them closer, there’s a devastating catch that keeps them permanently detached: they cannot come within six feet of each other, or there is a chance that they might get sick by the other’s bacteria, thus their weak immune system will shut down and kill them. So, they need to keep their distance, which obviously becomes a great struggle.

I must admit upfront that Five Feet Apart isn’t my thing. Not talking directly about the quality of the film, but rather the genre that it is based in (or, rather, dipped liberally within). It’s made for an audience nearly half my age at this point, and I’ve never really cared much for sappy melodramas like this to begin with, even when I was the intended target audience. But I did enjoy The Fault in Our Stars, both the John Green novel and its 2014 film adaptation, and while it had its own faults, I found it to be an affecting and engaging tale of tragic young love.

Similar to how The Notebook and Gone Girl inspired a slew of inferior copycats, there are crops of films trying to attract the same audience and achieve the same notoriety as John Green’s wildly successful novel and film. There’s no single doubt that Five Feet Apart very desperately wants to be the next Fault in Our Stars. It directly copies that film’s handbook in a rather nakedly, unabashed fashion. But another film that came to mind while watching Five Feet Apart was the similarly fatal Everything Everything, which is closer in line to what this new film ultimately becomes, right down to its crappy ending.

That 2017 YA adaptation was also elevated by its commendable lead performance from The Hate U Give’s Amandla Stenberg. As it continued with its by-the-books plotting and tiresome clichés, the stellar lead gave the movie life and energy it was sorely lacking from its lame storytelling conventions. But then, the third act brought everything (everything) down. And it now gives me little satisfaction to note that Five Feet Apart repeats this film’s lethal offenses.

There is an extended period of time where you, the viewer, start to say to yourself, “Hey, maybe this movie will work!” Against the odds and the formula and conventions that hold it back, perhaps Five Feet Apart will actually come together (pun intended) thanks to the strength of its cast, along with its commendable camerawork and narrow, yet potent focus. Unfortunately, that’s when the third act begins. The weight pressed upon Richardson’s shoulders starts to weigh the actress down, and she simply can’t carry the movie past its contrivances.

It’s a sorry sight to see. While the beginning wasn’t exactly promising, it definitely had some endearing potential thanks to the earnest, winning, layered, and immensely charming lead performance from Haley Lu Richardson at the center. You can see where the story is going from miles away, but you are pulled into the romance thanks to the warmth and emotional intensity brought by this young, great actress. The passion is carefully felt, and much like the distressed supporting characters surrounding our leads, you want this romance to work despite your better judgment.

You want to believe Five Feet Apart will be more than just a tired-and-true knockoff of a similar and ultimately better teen-centered weeper from only a few years prior. But then, the familiar formula incessantly bangs its way into the fold. While you wish the movie well, Five Feet Apart’s merits aren’t enough to make this otherwise acceptable teen romance blossom. And to be fair, it deserves credit for bringing the everyday struggles of cystic fibrosis to the public. I can’t speak for its authenticity, but to bring an awareness that hasn’t been found in many other forms of public entertainment is commendable. At the very least, Five Feet Apart should be celebrated for what it accomplishes there. If only the movie itself were better, though. Good intentions are great. The film, however, is not.

Often like young love, it wasn’t meant to be. And what a shame that is. But no need for pity. There’s no doubt that Haley Lu Richardson has a bright, beaming, and wonderful future ahead of her. And now that she’s making her mark with this lead role, hopefully the masses will begin to be charmed by her the way viewers at indie theaters who saw Columbus and Support the Girls have been taken in by her versatile talents. Richardson is on the rise, and she deserves much better than the generic casserole she gets in this middling muddle of manipulative mush. I’m looking forward to when Haley Lu Richardson can move herself away from Five Feet Apart.