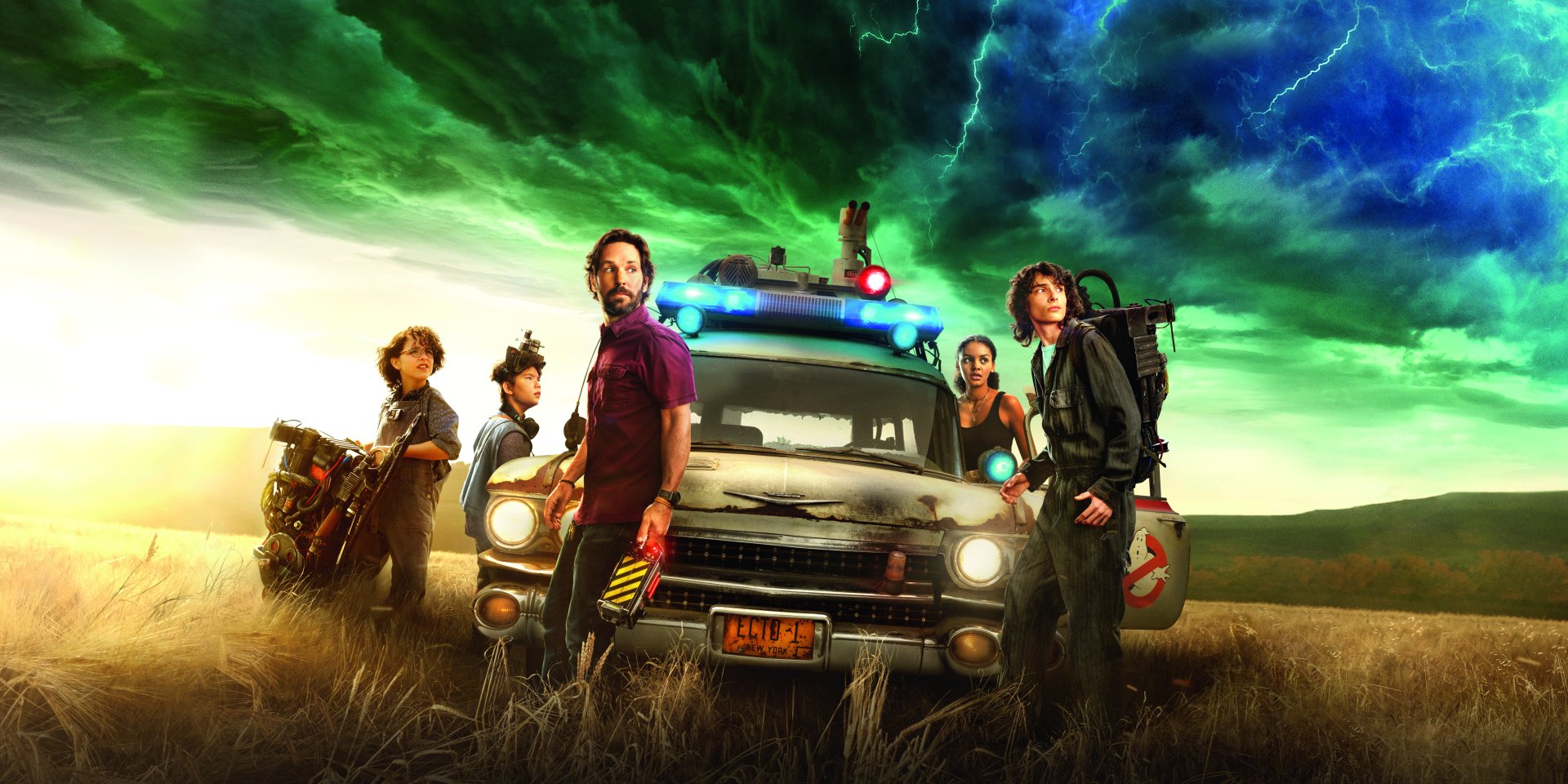 ‘Ghostbusters: Afterlife’ is a smart, low-key sci-fi adventure until it gets haunted by its own past

By Jon NegroniNovember 16, 2021No Comments

Home » ‘Ghostbusters: Afterlife’ is a smart, low-key sci-fi adventure until it gets haunted by its own past

Ghostbusters: Afterlife is the latest attempt to spark a blockbuster franchise out of the original 1984 classic film, Ghostbusters, from director Ivan Reitman, which was so brilliant in how it blended action, comedy, and horror in such a unique, satisfying way, especially for the time. And to this day, many fans still can’t seem to get over their obsession of that movie, so I have to be clear at the onset and say that I’ve never been ride or die for Ghostbusters, but I am an open-minded fan of this series and am always willing to give these movies a go.

First thing’s first. Afterlife is a very different attempt to revive the franchise compared to the top-down reboot from 2016, which did get mostly positive reviews from critics at the time but wasn’t the major box office hit Sony was apparently hoping for. I contend that the film, while unfairly scrutinized well before its release by trolls who simply wanted to bring it down for reasons that have nothing to do with the quality of the actual film, was painfully unfunny and reeked of all the irritating studio comedy cliches, or at least irritating for me, like pointless jokes about wontons and awkward humor at the level of a low-rent web series.

Paul Feig’s reboot was a good-intentioned attempt to clean the slate and do something totally different with the established mythology, which means it took place in a world where the original movie had never happened. Afterlife, however, is very much a direct sequel, or legacy/revival sequel, to the first film—it doesn’t really mention Ghostbusters 2, similar to how Jurassic World acts like the sequels may have happened, but it doesn’t matter either way if they did.

So it’s 40 years later and the prime Ghostbusting team made up of Bill Murray, Dan Aykroyd, Ernie Hudson, and the late Harold Ramis has long been split up and they’ve all gone their separate ways because there simply haven’t been any ghosts for them to deal with for decades and their services are no longer required.

But Afterlife isn’t really about them, at least not directly. We mainly follow a down-on-their-luck family of three who set out to inherit a farmhouse in the middle of nowhere, Oklahoma, which seems to have belonged to someone associated with the original Ghostbusters, though the movie plays a little coy with who this obviously is until later on in the film.

Carrie Coon plays a single mother named Callie, who has two quick-witted kids. The oldest is Trevor, played by Finn Wolfhard, who just wants to flit around this small town during the summer (they even named the town Summerville, as if that weren’t on the nose enough), and he also wants to fix up a car so he can impress his new coworker at the burger shop, and no there’s isn’t anything made about how the It star once dressed up as a Ghostbuster for Halloween in the second season of Stranger Things, so that’s just some trivia you can keep for yourself.

Interestingly, the film’s true point of view character is the other child, Phoebe, played by Mckenna Grace, who is a socially awkward 12-year-old obsessed with science and telling bad jokes. Again, it’s not exactly hard to figure out who these kids are supposed to be related to, but the good news is that they’re plenty compelling to watch whether you know that information or not.

The family notices right away that there’s something quite off about this spooky farmhouse they’ve just moved into, and there are even some bizarre earthquakes that happen on a daily basis, even though no one in town knows why they keep happening and scientifically speaking, they shouldn’t be occurring at all.

Phoebe, ever-curious as she is, eventually recruits some help in figuring these supposedly supernatural mysteries out from her summer school teacher, played by Paul Rudd, who is doing his usual humble, likable, everyman persona from films like Ant-Man and I Love You Man, basically as warm and vivacious as expected from him at this point.

Phoebe also brings in a fellow schoolmate actually named Podcast, who (you guessed it) has a podcast and is obsessed with conspiracy theories. On paper, someone named Podcast showing up in a Ghostbusters movie of all things should be the most annoying character to appear on the big screen this year, but surprisingly, he’s played so well and with so much smooth quirkiness by newcomer Logan Kim, who has the confidence of an actor who’s been making movies since he could crawl, yet this is remarkably his first film ever.

Afterlife was directed by Jason Reitman, son of Ivan Reitman, of course, and the narrative behind this movie easily writes itself. It’s a passing of the torch from the old Ghostbusters director to the new, but also the old canon to the new generation. In many ways, it’s a respectful tribute to what I consider a very good movie that other people seem to worship for reasons I’ve never fully understood but have no issue with. I actually find it odd what people appear to get out of that first film, as if it was always meant to be taken as a serious, epic blockbuster with all this emotion and grandstanding, but I’ve always found it to be a humble, funny, and constantly entertaining romp about friends starting a business but having to overcome the frustrations of bureaucracy, with all the ghosts and gadgets as something extra to make the whole thing even more exciting and different.

Still, it is nice to see Jason Reitman put his own stamp on the material and make a new kind of Ghostbusters movie, which this ultimately is. The film is at its best when it flows like a Jason Reitman movie, so with the dry humor seen from characters in Up in the Air and the prickly, but still breezy chemistry between family members like in Juno.

The central family is easy to find investing, because they each have their own idiosyncrasies, but also a shared language and understanding of one another. It really is impressive how Reitman, throughout much of his work, simply understands the way families talk and relate to one another, which serves this story about broken families trying to repair themselves after years of misunderstandings and hardship.

It’s odd because I enjoyed Afterlife the most when it wasn’t about ghosts and busting them. And in fact, it falls apart rather quickly once the whole thing becomes yet another third act frenzy to stop a big, world-changing crisis, despite so much of the lead up being enjoyably small and accessible. It loses so much of its earned goodwill and energy by the time all the action and mayhem has to let itself loose, though I will admit a set piece near the middle section of the film is probably when the whole thing peaks, featuring a thrilling car chase to catch a metal-eating ghost that is small-stakes, but creative and unpredictable, unlike almost everything that comes after it.

The other issue with this film, and where it will divide many, many people, I predict, is the heavy-handed use of nostalgia and how Reitman and his co-screenwriter Gil Kenan handle many of the callbacks and references to the 1984 film. Again, I’m not the biggest fan of that movie, I’ve only seen it two or three times, so I doubt I caught even half of all the Easter eggs. I can imagine someone going in and watching this movie without noticing all the little references and either feeling overwhelmed or overjoyed, depending on something as uncontrollable as their mood that day. I would probably feel overwhelmed if I were them because I just want to watch a new movie, I don’t want so many consecutive scenes relying almost entirely on me recognizing something from something else. This type of filmmaking, while certainly potent for its established fan base, can so easily alienate people who don’t know why they should care. So it is a shortcoming, but not a death blow to the film’s quality.

Without giving anything away, the ending really pushes the nostalgia bait into territory that a lot of people might find indefensible. I didn’t mind it much, but I did find some of the jokes and timing to be unusually awkward and off-putting, at least unusual in the sense that it feels a bit off compared to the rest of the movie’s sharp precision. And these moments didn’t move me to anything resembling tears in the way these filmmakers probably intended.

But I liked the film in spite of all these obvious indulgences, and that’s probably because I happen to respond quite positively to Reitman’s characters, so even if they’re not in a movie I happen to love on its own, I’ll still follow along and have a good enough time seeing what mischief these people get into and how they’ll try to get out of it. There will probably be more of these films coming down the line, how could there not, and fortunately, this movie provides enough decent foundation for making the next one a bit more polished and independently-minded. But for now, I won’t be answering the call for anymore Ghostbusters movies unless they really start making an effort to move on and focus more on the future instead of the past. Especially when they don’t seem to even appreciate what was really all that great about the past in the first place.