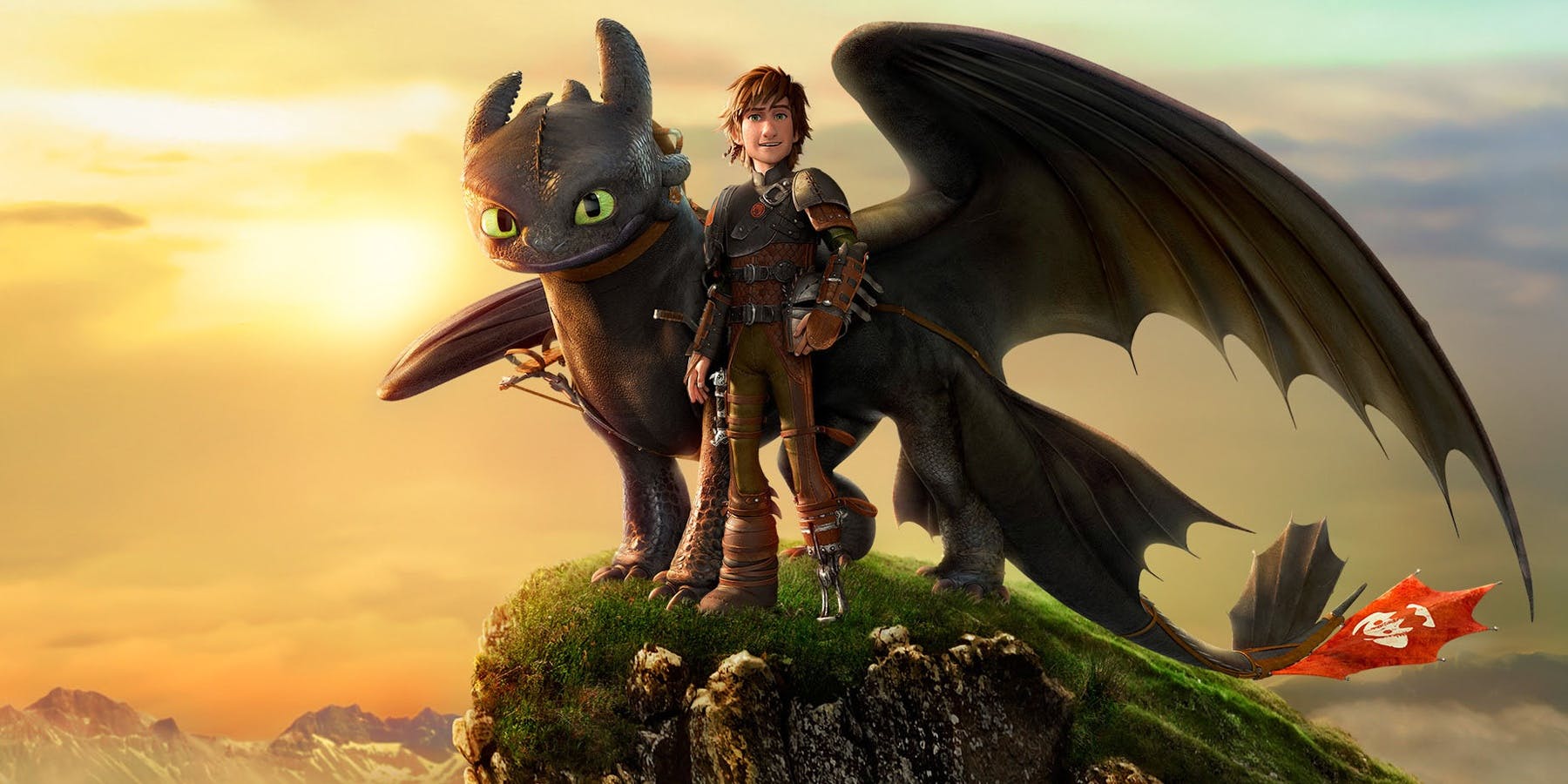 ‘How to Train Your Dragon: The Hidden World’ Review – Floats by on Charm, But Never Soars

By Will AshtonFebruary 21, 2019No Comments

Home » ‘How to Train Your Dragon: The Hidden World’ Review – Floats by on Charm, But Never Soars

When it comes to trilogies, it’s common for the third (and typically final) installment to be the weakest of the bunch. There are exceptions, of course, like Toy Story 3, for instance. Many Lord of the Rings fans would consider The Return of the King to be the franchise’s finest hours. It certainly has the Oscars to prove it. Before Midnight is a gorgeous, meaningfully melancholy and deeply mature conclusion to a masterfully-weaved series of films. And while it’s hard to say which one is the best in that trilogy, the third one is certainly a worthy successor to the first two films — to say the least. And I will still vouch for The Dark Knight Rises, dammit. But I digress.

It’s rare to capture the same magic as the first film twice, let alone three times. And there are several truly masterful film trilogies that have stumbled mightily with their third installments. Think The Godfather Part III, for example, which isn’t as bad as people say it is (in my humble opinion, at least…) but it’s certainly an uphill battle for anyone to say that it’s even remotely close to being on par with the first two bona fide masterpieces. Several filmmakers have tried — to varying levels of success — to make a great, gratifying third film to their respective trilogies. And most of them tend to fall short.

Unfortunately, despite his best and noble efforts, writer/director Dean DeBlois also falls short of greatness when making the third and presumably final film in his How to Train Your Dragon series with DreamWorks Animation’s How to Train Your Dragon: The Hidden World. A serviceable sequel at its heart, but a disappointing finale all-the-same, it doesn’t fall to the same despairing depths as other, similarly lesser threequels, but it equally comes nowhere close to reaching the same heights as the first two films. If there was ever a time when you wanted to see this franchise truly soar, it’s with its grand finale. But this sequel doesn’t breathe new fire or life into this series, opting instead to retread stale, familiar territory to less satisfying conclusions.

Where those two movies soar, The Hidden World feels strapped down by its expectations and its innate desire to make a conclusive, engaging trilogy capper that respects the simplistic and eloquent flightiness of the first movie and the epic magnificence of How to Train Your Dragon 2. In trying to find middle ground between two films with two separate tones, DeBlois makes a disjointed, inconsistent, and surprisingly uneventful conclusion to the series, which never lands on how exactly it wants to say farewell before spreading its wings and flying away into the sunset.

With The Hidden World, we’re once again introduced to the dragon-and-Viking-filled land of Berk, where time has allowed man and animal to cohabitate and build a prosperous society in which both species get along and make life more adjustable and sustainable for everyone. Well, at least, as much as you can find such pleasures when you are constantly trying to stop wandering tails from knocking you off your axis or breaths of fire from burning your behind.

It isn’t an easy life, but it has become more stable and adjustable for Hiccup (Jay Baruchel), the newfound chief of the land. He has proven himself to be a worthy successor to his late father, Stoick (Gerard Butler, reprising his role in dramatically-fulfilling flashback sequences), but a time of change is at foot in this flight-filled land. Specifically, many Viking villagers — including Gobber (Craig Ferguson, a continued standout in this series) — are wondering when Hiccup will muster up the courage to marry his partner, Astrid (America Ferrera) and raise a family with new heirs to the throne.

But these matters will need to rest when Hiccup and his band of Vikings discover the unwanted company of Grimmel (F. Murray Abraham, making good use of his baritone), who has made it his sworn mission to slay dragons and extinguish their reptilian race. That’s not going to win him any favors in Berk, and sure enough, he proves himself to be an unrelenting and challenging foe.

With their land not being safe from the dangers presented, Hiccup and his citizens must make themselves at home elsewhere, and Hiccup must also learn that not everything will stay the same as he gets older and life changes around him. He has said goodbye before, but not like this time.

On paper, there’s a sense of finality to this whole enterprise. But it doesn’t feel that way until the last 10-15 minutes, when DeBlois finally fulfills the promise laid within this trilogy’s final chapter. The ending of How to Train Your Dragon: The Hidden World reaches the heights found during the better moments of this decade-long trilogy, leaving the franchise on a high note that wins you over. It’s a shame, then, that the rest of the movie doesn’t pack the same punch.

This third film lacks anything substantial for nearly all of its running time. While I applaud the message of learning to say goodbye and letting things go coming from DreamWorks Animation, a studio that has prided itself on sequels the way Disney once did during their direct-to-DVD era in the early-to-mid ‘00s, The Hidden World falls into the same traps of the studio’s other threequels, including Kung Fu Panda 3, Madagascar 3: Europe’s Most Wanted, and Shrek The Third (*shudder*) of making a sorely forgettable and unremarkable third film to one of their most prosperous franchises. When everything should be heightened, The Hidden World arrives oddly lacking in anything new, creative, or engaging beyond a few more cool dragons, including the introduction of a love interest for our adorable Toothless. Something feels absent and unfulfilled.

Maybe they never quite cracked a good idea for a third film? Or, perhaps, the burden of bridging the first two films proved to be too great. It’s hard to say for sure. But The Hidden World is fine for what it is: a likable, well-constructed, and gorgeously animated DreamWorks Animation movie, and frustrating for what it could’ve been, a richly compelling, deeply engrossing, and meditative end to what was considered one of the finest animated trilogies of this soon-to-be-ending decade. It’s not that the film is bad; we just could’ve had something a lot better than what we ultimately got.

If I’m being mean or overly critical of this film, it’s because I’m ultimately disappointed. While I never reached the same adoring heights as many other wide-eyed moviegoers when it came to this high-flying animated fantasy series, I appreciated how these films evolved DreamWorks Animation’s ever-changing brand and allowed them to compete with their animation competitors, proving themselves to be rich and fulfilling storytellers for all audiences. Not to mention a studio that didn’t solely need to rely on bland and increasingly tiresome pop culture gags with the life expectancy of cheese to get butts in seats. They could tell good stories and reap those benefits. And with How to Train Your Dragon 2 proving to be an even stronger, more rewarding, and wonderfully crafted film than the first, the stakes were very high with this third film to provide DreamWorks Animation with their second great trilogy after the lovable Kung Fu Panda films.

But I’ve been too focused on the negatives. There’s a lot to like here. Like I said, The Hidden World is a beautiful sight to behold in terms of its visuals. The character designs for the Vikings and the dragons remain playful and inspired, the world building is still invitingly grand, and there are a few moments sprinkled throughout that really remind you why these movies strike such a chord with so many viewers around the world. But the shortcomings in this third film — including a few carryovers from the other two movies, like a bland villain and gags that don’t often hit their mark — are still found in this franchise, and with less of the greater qualities intact.

There is always a perception of third movies being underwhelming, in some way or another. Maybe it’s because we put too many expectations on them, or we expect them to do too much, or the filmmakers put too much pressure onto themselves to provide a finale that’s worth its salt. In any case, How to Train Your Dragon: The Hidden World is a decent, if lackluster, sequel that had the potential to be something with a lot more firepower. Alas, this new sequel keeps itself closer to the ground, opting to provide a decent finale that floats by on its charm but doesn’t ascend to greater heights.