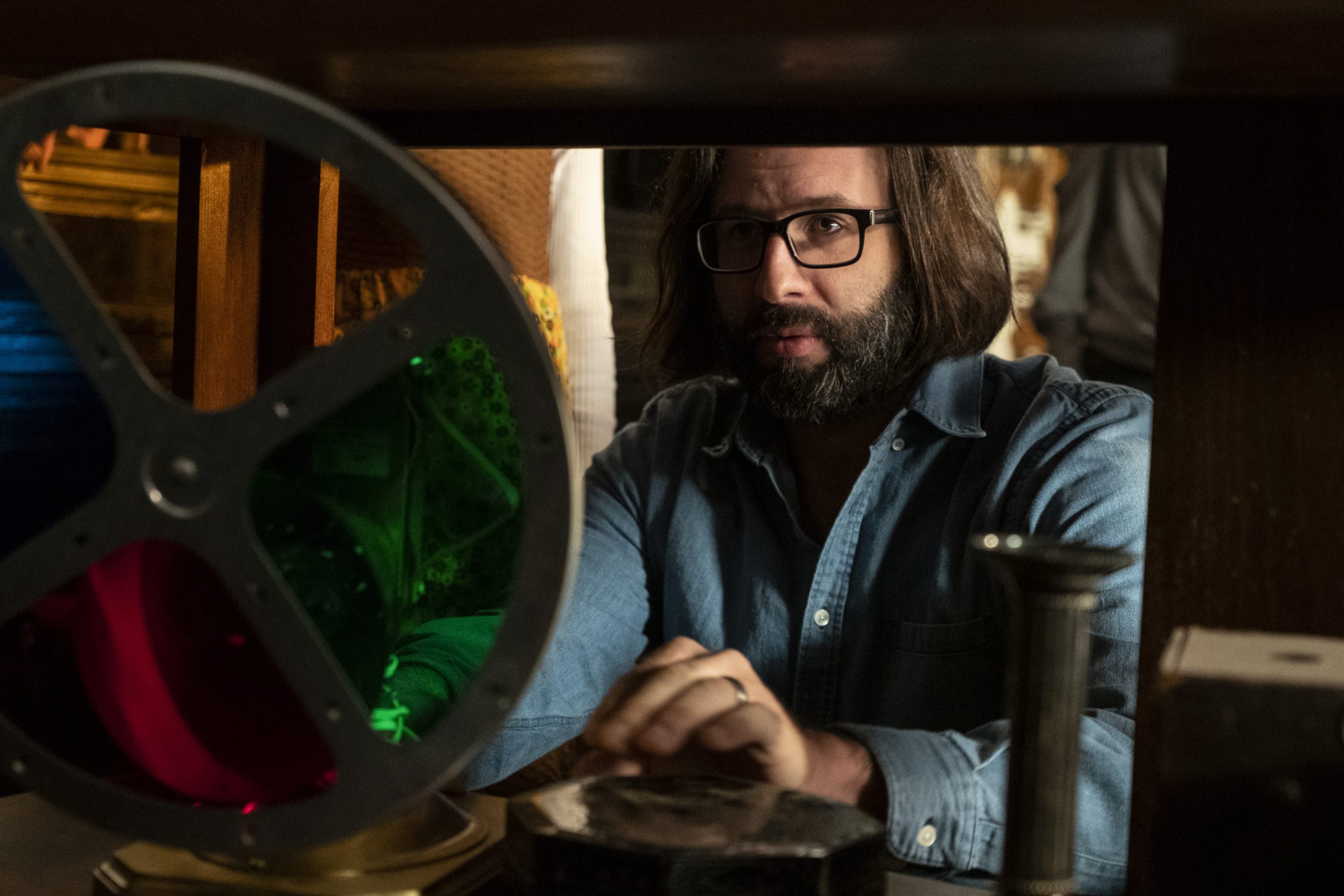 If you’re a fan of the Annabelle and Conjuring movies, then we have a special treat for you this week. I recently spoke with Gary Dauberman, writer and director of the new horror film Anabelle Comes Home, which hits theaters later this week. Dauberman was also the screenwriter for the first Annabelle in 2014, along with Annabelle: Creation and The Nun. He co-wrote It from 2017 and is the executive producer and co-writer for Swamp Thing, a new DC Comics series on streaming.

I had a wonderful conversation with Dauberman about his new film, what went into making it, and even some real-life horror stories that have impacted him as a screenwriter and now director.

This isn’t your first Annabelle movie, of course, but this is your directorial debut. How are you feeling? Nervous? Excited?

GD: Nervous. Excited. Anxious, I think is the word that trumps everything. It’s a knot of emotions.

There’s obviously a lot going on in all these films you’ve worked on within the Conjuring franchise. But what would you say is the heart and soul of the Annabelle movies? If you can distill it down.

I think the heart and soul is really the doll [chuckles]. So it’s a black heart and a corrupted soul. I think she’s such an iconic presence onscreen, and she provides an opportunity to really explore limitless kinds of scares that we fully exploit with these movies.

We’ve seen the “character” of Annabelle in multiple movies at this point. How did you go about building or building upon the established lore of who Annabelle is, where she comes from, and what she’s capable of? Are there any new details audiences can expect to see?

GD: One of the new details, I guess, although we’ve sort of teased it in the other movies…she’s this beacon for other spirits. Much like a lightning rod, she attracts supernatural entities or supernatural occurrences. That’s probably a new wrinkle that we more exploit in this movie…not go too deep into the mythology of the doll, because we’ve done that before.

But on this one, we wanted to see what it was like to be in the presence of the doll, or…when she’s brought into the artifact room, what it does to the other evil artifacts in the room and what that means for them. I wanted to deepen the mythology of the Conjuring universe by also exploring Judy Warren and what it was like to be the daughter of Ed and Lorraine Warren in growing up in a house that has this artifact room…filled with all these sort of dangerous and evil stuff.

GD: Oh my gosh. You mean in the Conjuring universe, or just in general?

Just the Conjuring universe. If we had more than a few minutes…

GD: [laughs] I think the ones that have frightened me are the ones that…we’ve explored in the movies or have established in the movie. Of course, the Perron family in the first Conjuring is one of their more famous cases that helped get the Warrens on people’s radar.

There’s a couple possessions they have experienced. I’m trying to think of his name, but there was a guy who was possessed by the spirit of a werewolf that I find really kind of frightening, but also super fascinating. A lot of the stuff that I have found frightening is the stuff that we’ve incorporated into these movies over the years. Like just the broad idea that this stuff is out there…

They dedicated their lives to this kind of work, and there was never a drought. This stuff was always happening, it’s not like they were hard up for business. Like there’s always something for them to investigate, I think, tells a certain kind of story which I find really fascinating.

You mentioned the first Conjuring, which came out in 2013. Feels not that long ago, for sure. As someone who has been involved with these movies for a long time, now, what would you personally like the future of this franchise to look like?  Do you have any opinions about where this [franchise] is leading?

GD: I hope it’s heading in the, I guess, “right” direction, but I feel like we’ve been doing a lot of stuff that seems to be working. So I hope it continues. I think we have an opportunity with these other artifacts to explore some other types of subgenres. Like I’d love to see a psychological thriller within the Conjuring universe. Frankly, I’d love to see a f—ing slasher within the Conjuring universe.

It sounds like you want the expansions to feel natural.

I can imagine that as the writer of the film, your script is impacted by the fact that you’re making the final calls as director. So how did you make sure this process would be as up to your standards as possible, knowing you have so much creative control?

GD: Well, I think I had the benefit of surrounding myself with the right people. Making a movie is a collaborative experience and I didn’t want anybody who wasn’t up for the cooperation, or who was going to be sort of that squeaky wheel. I wanted a sense of playfulness, because I think that out of that sense of play can come some great things because you’re not thinking critically in your head so much…it comes from a more pure place.

I was lucky to work with people like McKenna and Madison and Katie, who were so collaborative and so thoughtful in their approach to character and to the story. And they can offer their own suggestions, and being open to those suggestions is super important to producers, Peter Safran, James Wan, of course, to have his ideas, incorporate them.

And, you know, at the end of the day, I wanted to make a really entertaining and fun movie with hopefully some really scary sequences. That was my hope going in, and I hope we achieved that, but I wanted it to feel like a bit of a ride. And I explained that to everybody really early on, and they were all game, so I think we were all shooting for the same goal, which is important when you’re making these things.

This sequel feels very contained to one primary location, the Warren house. Definitely reminds of Halloween and The Shining and of course the other Conjuring films. So with one single location and all these demonic presences all in one place, what were some of the challenges or maybe opportunities to play around with when it comes to style, aesthetics, and misdirection?

GD: I think why Annabelle resonates with people, the doll herself, it’s because it’s taking something that’s supposed to feel safe and secure, and subverting it and making it feel dangerous and evil. And it’s something we all have in our home. And with this movie, we had the advantage of taking something that is supposed to feel safe and secure, which is a house, and specifically the Warren house, and subverting that and making it haunted and evil. And I think that was a real opportunity, so while it’s one location, it almost hopefully feels like two different locations. Once night falls, and the artifacts room really starts to infect the rest of the house.

And because we’re on location, just from a production standpoint, we can really take advantage of the fact that…like, if I had an idea…if I cut together a scene over the weekend and saw…like, “Oh my god, it would be so great to pick up a shot, here,” I had that advantage.

We were still at the location, so we could work it into the schedule, and I can go pick up that shot that I wanted, which a lot of times you can’t do when you’re going from location to location to location, because you’ve already moved on. The conversation about a scene didn’t have to stop once the scene was over, we could go back and revisit it.

GD: Man, that’s a tough one. Can I tell you a TV show that I just finished watching that I absolutely love?

GD: Cobra Kai. I just finished the first season of that a couple days ago, and I f—ing loved it.

GD: Oh good, so you know! From start to finish, it was such a joyful experience for me. That it was one of those…like, you know, when you get envious you’re not a part of that process. Or you’re not on that set, because it just looked like everybody was, again, working at the top of their game, they’re all working for the same goal, and for me, it just worked on every level.

I’m a little late to it, but man, I f—ing loved it. That, to me, was just a really pleasurable experience, watching that show.

If you get the time, you should definitely look into the second season. It’s just as good, if not better.

GD: I’m so happy to hear that, I can’t wait to start! ‘Cause it ends on such a beautiful…I was like, holy sh—, I can’t wait, so yeah, that’s what I’m going to do this week, is start getting into the second season.