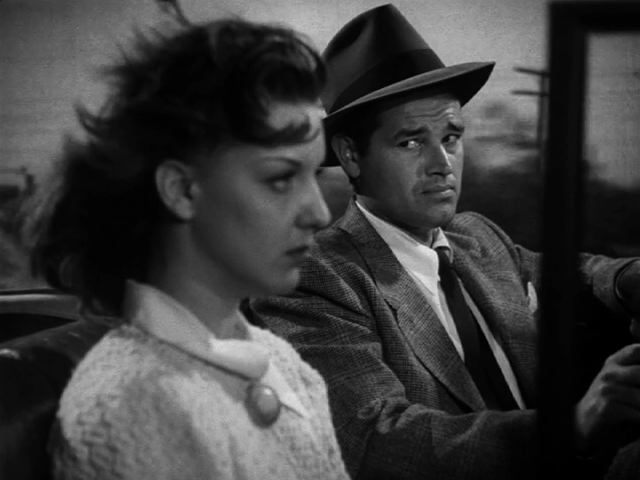 Originating from the German Expressionist movement of the early 20th century, film noir is a corner of cinema often reduced to a shallow microcosm of its time period. It’s a genre that has been worked in ever since the 1930s, but the most common association with noir is made to the stylish, studio-mandated crime dramas of the 1940s. Production-code-overseen stories of bitter detectives, steely romantic interests, and Tommy Gun-toting gangsters punctuating every sentence with “See?” are typically conjured up when thinking of the prototypical noir story, but there’s a distinct tonal influence hovering over these films, setting them apart from other thrillers. This is the compelling narrative underpinning the Criterion Channel’s choice for our 8th Movie of the Week.

Detour, directed by Edgar G. Ulmer and adapted from Martin Goldsmith’s 1939 novel of the same name, was released on November 30, 1945 by the Producers Releasing Corporation (PRC), a small and unglamorous studio specializing in low budget B-movies. Despite being initially well received, the film fell into obscurity for many years, but it has recently been revitalized and recognized as a true classic of the genre, thanks in no small part to its preservation in the Library of Congress.

The film tells a seemingly slight story of Al Roberts (Tom Neal), a talented pianist who becomes distraught when the woman he loves (Claudia Drake) makes off for Hollywood. Al decides to follow her there by way of cross-country hitchhiking, but he suddenly finds himself in an extremely dangerous and difficult situation when a friendly bookie (Edmund MacDonald) is unexpectedly killed while giving him a ride. Hesitant to take any action, Al decides to assume the man’s identity and continue the journey, but all of that is put in jeopardy when he encounters Vera (Ann Savage), who seems alarmingly aware that something suspicious is afoot.

Detour is undoubtedly a shabby film. The locations are limited and staid, the collective performances are never particularly good (they’re never particularly bad either, but they’re nothing impressive), and the film never fully connects on a narrative or visceral level, in spite of its potential for suspense and melodrama. At a mere 68 minutes in length, which is short even by 1945 standards, the entire film has an inconsequential aura to it, but the astonishing element to Detour is that almost none of these flaws occurred to me while watching it.

As I mentioned earlier, the subtextual undertone of noir is what ultimately makes Detour worthwhile many times over, and that undertone is one of regrettable inadequacy. The protagonists in these stories are always male, always white, and always lacking passion and sympathy. I get the sense that the “grizzled detective” persona is simply a facade; it’s not that they aren’t skilled at their jobs, it’s that they can’t help but feel unfulfilled and therefore refuse to get in touch with their emotions.

Given that much of the genre — as it applies to Detour, anyway — was prevalent during and soon after World War II, I wonder why more of these characters aren’t serving overseas. Granted, acknowledging the hardships of everyday life wasn’t at the top of Hollywood’s priority list in 1945, but the archetypal private eye is likely an interpretation of a very real personality type. In the wake of the Great Depression, the cynicism and desperation of the so-called “common man” reached an all-time high, and Tom Neal gives us a tangible and captivating catalyst for this character in his central performance.

We first meet Al in a shady diner looking utterly defeated. Somebody asks him where he’s headed, and he simply responds by saying, “East.” The person asks where from, and true to fashion, Al curtly utters, “West.” From there, we see through flashback what has brought Al to this place and how everything that could possibly go wrong has done so in rapid, crushing succession. He’s completely lost the will for hope or optimism, and although he hasn’t taken the step to becoming the typical, grizzled detective, we understand why it’s the next logical step.

In this way, Detour serves as a deconstructionist origin story for a type of character we’re all familiar with. It’s not subversion or even revision, but rather a way of explaining this kind of person in a way that is empathetic and understandable. For that reason, I can easily overlook many of the film’s underwhelming implementations of suspense and pacing, and I can recognize the true value to be found. It doesn’t add all that much to the legacy of film noir, but I’d be lying if I said it doesn’t shed a modicum of light on the genre’s real-life connections. It’s easy to see why Criterion wanted to bring attention to the film for this very reason.

Detour, along with every other weekly title, will be available to stream when The Criterion Channel debuts on April 8. Come back next week for a piece on Karel Zeman’s The Fabulous Baron Munchausen!