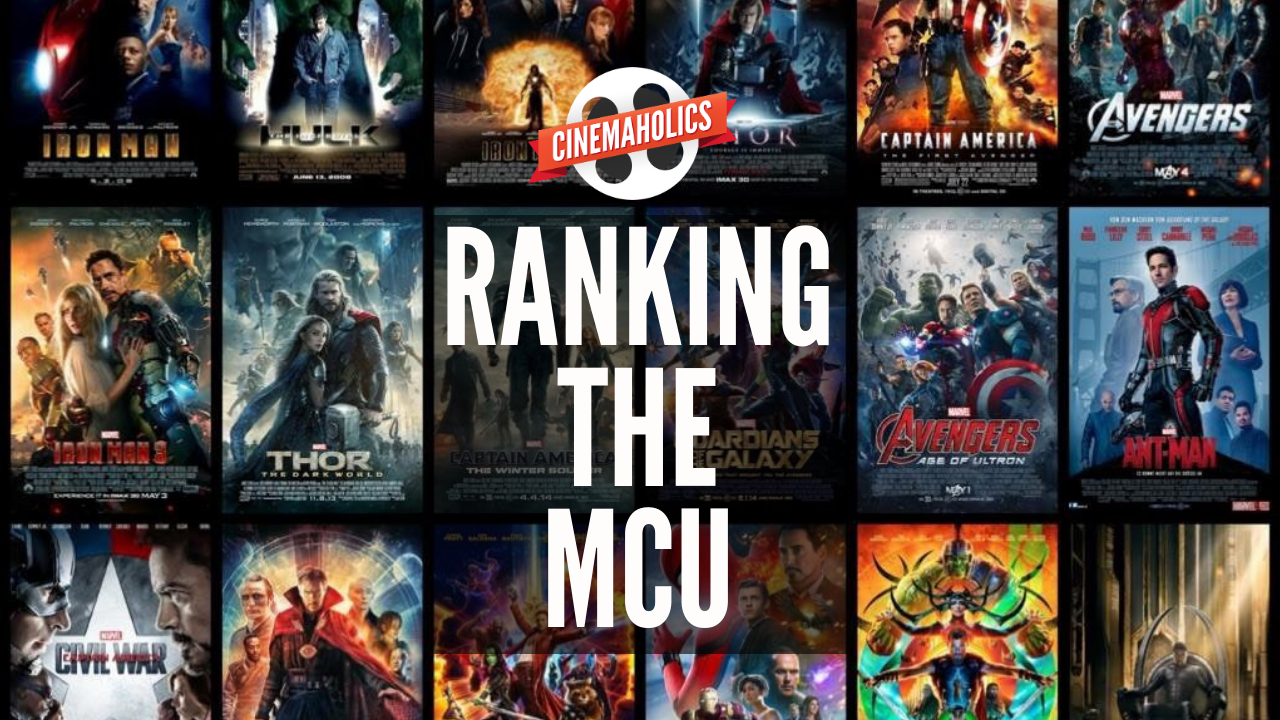 Avengers: Endgame marks the end of the Marvel Cinematic Universe as we know it. At least…until Spider-Man: Far From Home comes out in a few months. Regardless, there are 22 films in this sprawling quilt of franchises, and not all of them are made equal. In this bonus episode of Cinemaholics, I spend a grueling two hours with Sam Noland collaborating and debating a definitive ranking we can both put our names on.

Laughing aside, we hope you enjoy our decision-making into these picks and let us know in the comments how you would rank them differently! Without further ado, here’s the final list of films for your viewing pleasure, or listen to the full episode above to hear our discussion in real-time.

As it happens, Sam and I had no trouble placing both of these right at the bottom of the bottom tier. Though I don’t heavily dislike either film, Sam had quite a lot to say about his reasonable disdain for the original Hulk and it’s supposed self-importance. As for Thor: The Dark World, this is one “airball” mistake Marvel has impressively managed to avoid repeating for the most part.

Both of us could agree that while Doctor Strange had impressive visuals and a clever ending, it couldn’t do much to win us over on Strange himself (a feat later films with the character would do a bit better). Thor suffers slightly because of its failure to nail its massive character moment when Thor faces down the Destroyer with no powers. And even though I wanted Iron Man 2 quite a bit higher, I had to concede some ground after Sam raised some notable complaints about its unremarkable plotting.

Sam had Iron Man 3 much much higher on his list, even though I had it almost at the very bottom. Somewhere along the way we managed to compromise on giving it the #15 spot, right above Ant-Man and Avengers: Age of Ultron, which I wanted slightly higher on the list. Though I used to defend Iron Man 3 as possibly the best of the trilogy, a recent rewatch has soured me on the film quite a bit, but Sam raises some compelling arguments to elevate this one on merits I hadn’t considered before.

We’re just as surprised as you are. For years, I considered The Winter Soldier to be top tier Marvel, but Sam has always had issues with the film that have kept him from loving it alongside the consensus. After rewatching the film fairly recently, I incidentally found myself much closer to his view on the film, though I managed to negotiate a higher placement for this one. No really, it was further down the list when we started.

One of our other big discrepancies was for Guardians of the Galaxy Vol. 2, which I had a bit higher. We managed to move this one down the list as part of some later deal-making I did, and along the way we bumped up Ant-Man & The Wasp (which Sam wanted even higher, even though I had it right above the first Ant-Man). Both of us were about on the same page with Captain Marvel fitting nicely into about the middle of the MCU at large.

All right, time for the main event. Let’s get into the Top 10!

Though Sam was far more partial to Iron Man 3 being the best of the Tony Stark films, we compromised on my favorite staying in the Top 10 while moving Iron Man 3 up a spot. It’s the film that started it all, and though it might not be the most impressive Marvel entry in any one particular category, it’s still an all-around blast of a movie.

There wasn’t a lot of movement on this list for either Spider-Man: Homecoming or The Avengers, which Sam and I had welcomed into the Top 10 without much disagreement. We both agree the re-watchability factor is key for these films, especially Avengers, which doesn’t hold up quite as well years later. Still, it’s pretty high up this list for reasons that should be obvious. It’s the team-up movie that practically birthed a genre.

I wanted this one a bit higher, but I made a deal with Sam to keep another favorite of mine in the Top 5. As a result, we landed with Infinity War making the #7 spot for being an epic crossover event with too many pleasures to get bogged down by the flaws (unless you’re looking for them).

I had this one way lower on my list, much to Sam’s surprise. But he convinced me to raise it all the way to #6 with some great arguments, reminding me of how the third act defined one of the most compelling villains in this saga, plus it can be credited for introducing two major new players to the MCU without them feeling forced or insignificant.

It took some finagling to get Sam to agree with this one making the Top 5, because though it has at times been my personal favorite of the MCU, Sam apparently felt nothing any of the times he watched it. Go figure! I made my case, of course, being sure to remind of Jeff Goldblum’s memorable performance and how consistently funny the film is throughout. But going further, we could both agree that it was a welcome sight to see a director “lay waste” to the boring world building of a franchise they could have easily cut loose. It’s one of the boldest “resets” in superhero film history, which makes it a joy to revisit over and over again.

Like its titular hero, The First Avenger might be the Marvel film that ages the best. Despite coming out eight years ago, the entire production stands up to today’s scrutiny, plus the baggage of many other films that present this character in thrilling new ways. Sam and I were in full agreement to have this one pretty high, mainly because we consider it a near-perfect archetype for the superhero origin film with something meaningful to say, as well as a better defined context for Marvel history and how it diverges from our own.

3. Guardians of the Galaxy

I had this one up one more spot, but Sam convinced me to trade it with what would be his #1 (not a bad deal for me, honestly). Guardians of the Galaxy is the Marvel movie that proved this shared universe could seriously branch out in some fantastical ways, capturing the spirit of a space opera with huge laughs and lovable characters. Cultural impact alone is good reason to consider Guardians among the best, if not most important films by Marvel, especially if standalone quality is one of your main criteria.

From start to finish, Black Panther is an absolute triumph of filmmaking. It easily boasts the best villain of the MCU and perhaps the best writing. Sam had this as his #1, but I contested the placement because of how the film ultimately falls down on its action spectacle, save for the iconic scene above. But as far as origin films go (if you count this one as an “origin,” at least), Black Panther is the gold standard of the MCU.

And now, our #1 pick of the Marvel Cinematic Universe.

This may be the most controversial, even polarizing pick on this list next to Winter Soldier, but I stand by it 100%. Sam hadn’t seen Endgame while we did this ranking, so I had to exercise some compromises all over the map to justify keeping this as my #1. As I state in the discussion, Endgame is the culmination of everything this universe of film has been leading up to. But more than that, it’s easily one of the best in every category, from heart and action to laughs and character work. It’s also one of the only films on this list to provide any real sense of closure or cinematic finality to characters we’ve followed for over a decade, bringing about a moment in film history that shouldn’t be underplayed. It may not be the final film of the MCU (not by a long shot), but for me, it’ll be the one they may never manage to top.

UPDATE: Hey everyone, it’s Sam. I’ve now seen Avengers: Endgame, so here are my post-ranking thoughts! I didn’t necessarily enjoy Avengers: Endgame quite as much as other films in the series, but it’s unexpected, reflective, and impactful in a way that fully lives up to its title. Every other film on this list is both necessitated and validated by Endgame, so it would feel like a disservice to have anything else at Number 1. It may be too early to declare Endgame as the defining film of this genre’s legacy, but it’ll be incredibly difficult for anything else to surpass it.

Agree? Disagree? Eh, who are we kidding, of course you disagree! Let us know your own list in the comments below.