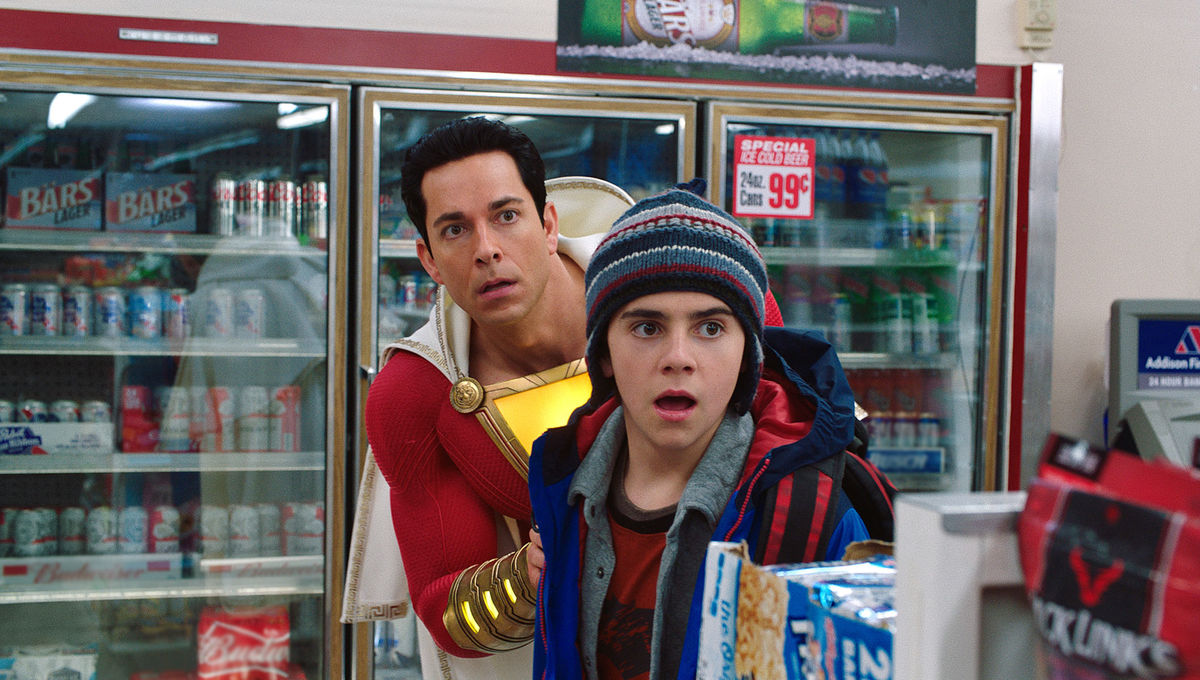 ‘Shazam!’ Review – Introducing a Hero as Funny as He is Super

Home » ‘Shazam!’ Review – Introducing a Hero as Funny as He is Super

Shazam! is probably the last film a lot of superhero movie fans expected from the expanded cinematic universe of DC stories, which have recently taken a turn for the colorful and fantastical with Aquaman, as well as the dynamic and righteous Wonder Woman. Unlike those entries into the ever-growing mythology of live-action gods and heroes, this new film from oft-horror director David F. Sandberg is a heartfelt family comedy with an authentically “teen” edge, boasting far more angst to chew on than its closest rival, Spider-Man: Homecoming.

Set in the modern day of the DCEU — where the world at large knows about and accepts the existence of superheroes like Batman and Superman — Shazam! ebbs closer to Man of Steel in the way it kicks off the story by initially introducing us to our prime antagonist (Mark Strong), who is inextricably linked to the efforts of our eventual hero (the name of whom changes throughout the film, and to tease even one of these joke titles would rid viewers of some decent laughs).

Our hero and villain are, at separate times, introduced to the concept of magic as a superpower, representing a morally zen balance of good and evil overseen by an aging wizard named Shazam (Djimon Hounsou), who seeks a worthy replacement. The catch, however, is that his successor must be pure of heart if he/she wishes to protect the world from “7 deadly sins,” a row of malevolent gargoyle demons aiming to free themselves from the wizard’s otherworldly prison.

It’s a lot of lore to sift through, but Shazam! wisely tempers its world building with the plight of Billy Batson (Asher Angel), a 14-year-old foster kid who runs away from every family willing to take him in so he can find his real mother, who he inadvertently ran away from as a young boy. After his latest misadventure, Billy is placed in an eccentric foster home filled with new brothers and sisters aiming to win his heart, mainly Freddy (Jack Dylan Grazer), a disabled nerd obsessed with this world’s true superhero stories.

This geeky knowledge comes in handy later on, when Billy is selected by Shazam to become a brand new type of superhero. By simply saying “Shazam,” Billy transforms into a fully-realized adult (Zachary Levi) with a wide array of powers. Together with Freddy, our hero embarks on a journey of discovering what it means to not just be a hero, but also be…in…a…family?

Right, so the themes at play aren’t always elegantly woven, but it’s only a nitpick to fault the film for attempting to play with deeper heartstrings than the typical comic book origin story. But watching Billy confront the “realities” of being a superhero in a world filled with them is an enticing and well-developed adventure for the audience. This is why the decision to frame Shazam! as a complete comedy works brilliantly, allowing the audience to take the human elements more seriously, while simultaneously accepting the zanier bits as good fun.

This is especially fortunate considering how low-budget some of the effects tend to look, with CGI and visuals that probably won’t age well, especially once the high-octane third act rears its 7 deadly heads. The film does wonders to set up our villain as a truly imposing threat, but it’s almost a detriment to the film because it has to seriously stretch the main conflict into a series of uneven set pieces that range from thrilling to frustrating.

Thankfully, the film ends on a high note by remembering what makes this cast of characters so lovable in the first place, and that’s the family dynamic. It really is refreshing to see a turnaround in a film that subverts the standard “only _____ can save us” trope, so suffice to say, Shazam! offers a believable and exciting conclusion with the promise of even more engaging follow-ups to come.