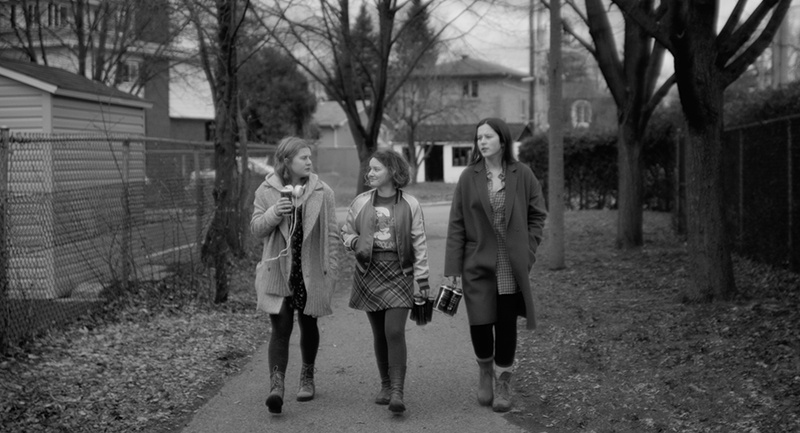 Slut in a Good Way was directed by French-Canadian actress Sophie Lorain and stars Marguerite Bouchard, Romane Denis, and Rose Adam as Charlotte, Mégane, and Aube respectively, a trio of teenage girls who are hired to work part-time at a toy store during the winter holidays. Over the course of the season, they each engage in various romantic and sexual exploits with their coworkers and are suddenly forced to reckon with the frustrations and uncertainties that arise when it comes to adult relationships.

Originally released in Canada on March 2, 2018 under the title Charlotte has Fun — and at the Tribeca Film Festival in April of the same year — the film received a limited theatrical run in the U.S. on March 29, 2019. This is a late review, but hopefully for some readers, it’s right on time.

One of my favorite things about Kay Cannon’s Blockers from last year was that it presented lurid sexual gossip so often associated with adolescent males from the female perspective, and it was done in a way that felt genuine, refreshing, and comedic all at once. That film is obviously unrelated to this one, but it made for a similar, honest sense of humor that leaves an impression within the film’s opening seconds. We’re informed as quickly as possible that our protagonists are exactly as they appear: confused, frustrated teenagers who are just beginning to grapple with the grueling trials and incredible rewards of adulthood.

As such, they’re decidedly sensational in expressing their emotions and are riddled with angst at every turn. They alter their motivations on numerous occasions, but what remains constant — and what makes them so endearing — is that they’re always on the path to maturation in a wide-ranging sense. They appreciate every victory and learn from every defeat, and although it takes a large part of the film for them to discover their true objectives in life, I found myself rooting for them to succeed in finding it along the way. There’s a distinct absence of parental figures in the story, and although this is justified somewhat haphazardly, it clears up the pacing of what I can only imagine would be unnecessary subplots, and this allows the underlying messages to speak that much louder.

Of the three protagonists, Charlotte receives most of the focus, and her arc is where the title draws its meaning. Following a disheartening breakup, she finds herself intensely attracted to many of her male coworkers and begins engaging in casual relations with them. Word of what’s she been up to eventually gets out, and she’s confronted with the largely negative view put upon sexually active women. From there, the film becomes an empowering story of, metaphorically speaking, re-appropriating the word ‘slut’ to have a more positive connotation.

The tragic stud/slut double standard is directly addressed on numerous occasions, and the confrontational nature of the second half in particular makes for a powerful counter-argument to the familiar androcentric way of thinking; it’s very fitting that this would come out now, following the glorious wave of “thirst tweets.”

The film is sex-positive in a way that I don’t think I’ve ever seen from any American production, and it manages to strike an uplifting tone in spite of the turmoil for these characters in their own personal journeys. What’s more, it has a fantastic atmosphere; most of the film takes place inside a single building, and it’s great to become familiar with this setting and the characters within. The locational intimacy wonderfully mirrors the conversational intimacy, and it’s tremendously effective in developing an empathetic bond between these women.

As you may have noticed from the thumbnails, the film is shot in high-key black and white, which gives it a memorable and unique aesthetic. The male characters, although not focused on, are given ample time to express themselves and aren’t portrayed as being overly villainous or callous, which contributes nicely to the overarching sensibility of realism.

Above all else, Slut in a Good Way simply feels authentic and significant. I’m actually not too much older than the protagonists, but the familiar experience of these late teenage years seen through a new perspective carried powerful weight, for me at least, and I can reasonably say I now have an improved understanding of modern adolescence. There were a handful of culminating instances that brought me to the verge of tears, both of happiness and sadness.

Slut in a Good Way is now playing in limited release for at least another week, and I can say with absolute confidence that it’s worth seeking out in whatever fashion possible (just don’t take your kids; it certainly earns its R-rating).