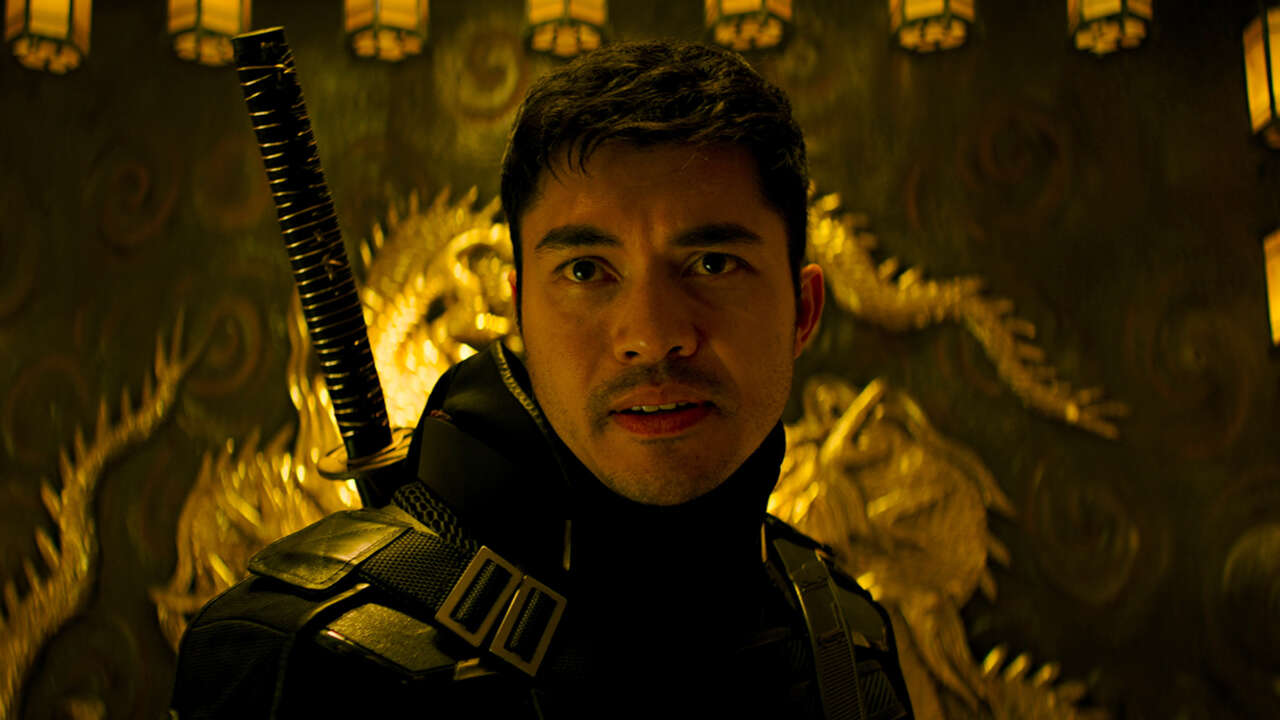 Snake Eyes, also known as Snake Eyes: G.I. Joe Origins, is at constant war with itself, particularly over whether or not it wants to go full tilt into that clumsier, bulkier title connecting it to Paramount’s reboot of the G.I. Joe franchise, which fizzled out after just two tries, both of them colorful and surprisingly engaging for what they are, but ultimately too forgettable for audiences to collect ’em all.

So the mission briefing for Snake Eyes makes perfect sense on paper, as director Robert Schwentke and screenwriter Evan Spiliotopoulos choose to lean in on the backstory of fan-favorite ninja, Snake Eyes, whose ongoing rivalry with Storm Shadow in the last two movies certainly added some amusing, intense, yin-yang battles with all the swordplay and hammy dialogue fans of the toys probably played out themselves for years when they were kids (right?)

But this approach is where Snake Eyes sneaks into some dangerous territory. The long-running appeal of the character has been his mysterious, silent persona—he’s the resident badass who pops in whenever the plot of these movies needs saving. The character of Black Noir in Amazon’s The Boys has added some much-needed subversion to that character trope pretty recently, but that’s not to say fans won’t still crave a version of that character being front and center. But for this “origins” movie, Spiliotopoulos decides to redirect what people like about Snake Eyes to something genuinely new, so motorcycle mileage will certainly vary.

Casting-wise, Snake Eyes hits the target with Henry Golding (Crazy Rich Asians), who clearly wants to rebrand himself from romantic comedy darling to roguish antihero. In Snake Eyes, it’s not always clear if the “hero” part ever really materializes.

Given a tragic cold open propelling him to a vengeance-consumed present as a talented brawler who falls in with the Yakuza, then later a shadow clan of ninjas at war with said Yakuza, Golding plays charmingly distant and aloof like no other, complemented by strong supporting performances from Andrew Koji, who plays the shadow clan’s leader-in-training, and Haruka Abe as the clan’s security chief who challenges Snake Eyes to become the action figure he was always meant to be.

This of course means that the origin of the character established in the first G.I. Joe has been fully excised, along with the troublesome implications of a white man appropriating stereotypical Asian ninjutsu and constantly getting the better of his Asian counterpart. Instead, Snake Eyes takes cues from, well, Crazy Rich Asians, by making this more about an Asian American thrust into a world he doesn’t fully understand, and most of his trials and tribulations throughout the journey involve personal growth and besting his demons, not necessarily other people.

It’s a surprisingly sharp and clever rewrite that makes the entire idea of reseting this character a positive step forward for what appears to be a new cinematic universe in the making, though it’s hard to imagine another Joe or Cobra character deserving an entire origin film to themselves. Even Snake Eyes has to occasionally share the screen a handful of times with Scarlett (Samara Weaving, once again emphasizing her iconography with a crossbow) and the typically wicked Baroness (Ursula Corberó). Still, it’s exciting to see an action blockbuster at this scale putting its chips on a mostly-Asian cast, even if it does mix in some odd clichés of both Eastern and Western cinema with screaming Yakuza henchman and bloodless, PG-13, gun-fu (imagine the Ronin scene in Avengers: Endgame, but for two, unironic hours).

On that note, the biggest downside of Snake Eyes is that the promise of a ninja action film dripping with all-out battles is undercut by some seriously flawed action choreography, uninspired stuntwork, and deliriously shaky camerawork, all patched together by desperate editing choices trying to hide where even the CGI has lost the plot. If the best thing you can say about a G.I. Joe movie—particularly one centered around Snake Eyes—is the drama and characterization, then clearly someone dropped the ball, here.

It’s easy to look condescendingly toward Schwentke’s history with the Divergent franchise, which didn’t even get to finish its theatrical story after two films and a glorified “Part 1” to its finale. But he also made Red, to be fair, an enjoyable, humbly-made action romp that stood out more for its characters than any particular set piece. If you’re willing to roll the dice on something like that, then Snake Eyes might actually win you over.