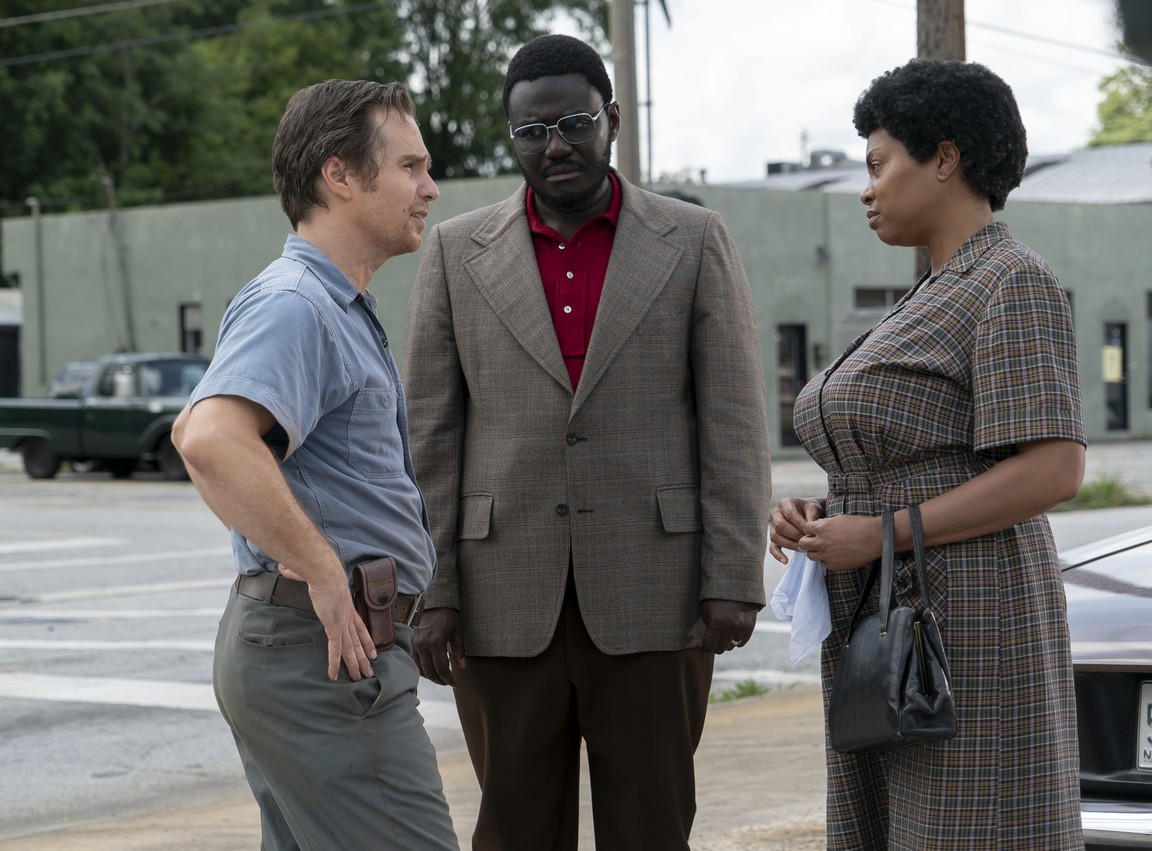 Robin Bissell has produced, though not frequently, films of varying quality over the years, primarily under director Gary Ross. If you’ve watched Pleasantville, Seabiscuit, The Hunger Games, or Free State of Jones, for instance, then you’ve had a chance to spot his name in the credits. And now, after two decades of bringing films to the big screen, Bissell has jumped into the director’s chair with his own screenplay for The Best of Enemies, a lukewarm debut for the veteran producer under the STX Films brand.

When producers take a stab at writing and/or directing, results can vary. That’s certainly the case for this earnest-yet-unremarkable film, a true-life civil rights story based on the book of the same name by Osha Gray Davidson. A handsome and generally competent drama, if not quite as essential and impactful as its convictions would suggest, Bissell’s first attempt at directing proves to be serviceable and even charming at times, but not much more. It might win some audiences over, or it might not. But will it be remembered in the long-term? More than likely, no.

Taking place around Durham, North Carolina in 1971, The Best of Enemies stars Taraji P. Henson as Ann Atwater, a vigilant and active civil rights leader who’s been at odds with C.P. Ellis (Sam Rockwell), the local leader of the Klu Klux Klan, for the better part of a decade. Atwater’s desire to better the lives of the impoverished African Americans in the area is at odds with the beliefs fostered by Ellis and his hate group for obvious reasons.

But when a fire engulfs the local elementary school for black youths, the notion of an interracial school is brought to the forefront of the community. Ann Atwater is in support of the idea, but C.P. Ellis, as you would imagine, is not. Therefore, the two activists rather reluctantly agree to get together for a two-week community meeting to deal with a court-ordered school desegregation decree, which will allow handpicked members of the city to decide amongst themselves whether or not to go forward with this integration. At first, Ann and C.P. don’t exactly see eye-to-eye. But as they get to know each other more intimately and intently, their lives are soon changed.

As far as I can tell, there was never a point when The Best of Enemies was scheduled for a fall release, at least not officially. But even if it wasn’t meant to come out at the height of awards season, this biopic often feels like it’s vying for such high accolades and distinctions. There’s a definite whiff of “Oscar-bait” surrounding the drama’s approach, which isn’t to say its intentions are solely to take home awards; I doubt many films are solely designed for such limiting aspirations. But there’s no question Robin Bissell’s directorial debut frequently falls into the trappings of a cynical Oscar-grab, particularly the ones that focus so intently on the conversation around race without adding much substance.

It’s also hard to ignore the similarities between The Best of Enemies and other recent Oscar contenders featuring civil-rights-era subject matter, namely BlacKkKlansman and Green Book (which ultimately won Best Picture). That said, the story told in Enemies remains relevant, but it might’ve been better appreciated if it didn’t have the unfortunate timing of following up two films that quite recently made such a big splash on the awards circuit — for better or worse. It doesn’t hit the lowest lows of Green Book, nor does it similarly hit any of the highs of BlacKkKlansman. As a result, it’s less memorable than either film. It’s average, likely to a fault; the type of well-meaning spirit-riser that will soon slip from our minds.

The Best of Enemies isn’t necessarily boring, but it can be a touch stale with its broad and formulaic story structure. Even if you’re not familiar with the real history behind these events, you can rather easily predict much of what will happen in this story, and there are only a few, sparing moments that might take some viewers by genuine surprise, or perhaps offer some catharsis and healing.

It’s a familiar template that has been done both better and worse, and quite recently at that, putting The Best of Enemies somewhere in the middle in terms of its approach. While it might win over less demanding audiences who don’t mind hearing a well-worn fable such as this one, it might also be deemed insufficient, despite not having any outright terrible qualities. It contains a few redeeming strengths, but nothing that makes much of an impact beyond the two-plus hours you spend with the film.

I’m concerned for Sam Rockwell, ladies and gentlemen. Not for the sake of his career (it would seem the character actor is celebrating a professional high at the moment with two consecutive Academy Award nominations, one of which he won). But he is clearly stuck in a holding pattern of playing racists or bigots (or both) in Three Billboards Outside Ebbing, Missouri, Vice, and now, The Best of Enemies. I love the guy, but he’s getting a little too…good…at playing racially insensitive men, at least for my personal taste. Hopefully, his upcoming take on Bob Fosse in Fosse/Verdon will shake his repertoire up. But it should be noted that he gives another strong and worthwhile performance as C.P. Ellis.

It can be hard to carry a film that is centered around the leader of a Ku Klux Klan, but Sam Rockwell portrays him in an intriguing light without making him outright sympathetic from the get-go. It’s a credit to Rockwell’s talents that we’re able to endure long stretches devoted to the leader of such an intolerable and despicable group filled with such hateful individuals. It’s a hard balance to draw us into this character’s life without making us root for his objectives during the early moments of the film, and only someone of Rockwell’s caliber could pull that off.

For a film that’s meant to depict the journey through which our two main characters see themselves as equals, however, a considerable amount of time is focused on C.P Ellis’ character and his plight as opposed to Ann Atwater’s journey. It’s not as glaringly problematic in this regard as Green Book, and it makes some deal of sense since C.P. is the character with the most dramatic arc. But this is a film where Taraji P. Henson is ostensibly intended to be our lead protagonist — at least, that’s what the first part of the first act suggests. So, it’s disconcerting to see such a talented and well-proven actress sidelined in her own movie more often than not, serving as the means through which Rockwell’s character learns to grow to become more tolerant and less of a racist.

Obviously, C.P. Ellis had to grow more — at least, according to the film — to earn the friendship he shared with Ann Atwater later in life. But it’s hard to see where the film takes care to develop this core relationship in equal strides, especially as it pushes Henson to a secondary role, giving the story less dimension and depth than it could’ve (or should’ve) afforded itself.

Despite these limitations, Taraji P. Henson gives another ferocious and strong-willed performance, and fans of the Empire actress’s work will likely walk away quite satisfied by what she offers. Though this is yet another film continuing Henson’s recent tradition of being cast in projects unworthy of her skills. Hopefully, some Hollywood producer somewhere will finally give Henson her due. Even if Robin Bissell fails to do so here.

The Best of Enemies is, in a word, adequate. It’s never as good or as bad as it could’ve been — or, perhaps more appropriately, neither its best or worst self. It’s not a film worth dismissing, but it’s a hard movie to recommend, at least beyond a rental or passive streaming watch somewhere down the line. Even Green Book, for all its well-noted and heavily-debated faults, was at least more amusing and sometimes more entertaining by comparison. The film serves its purpose, and it might inspire some good in the world. But it probably won’t have as much of a potent legacy as the true story it finds as its inspiration.