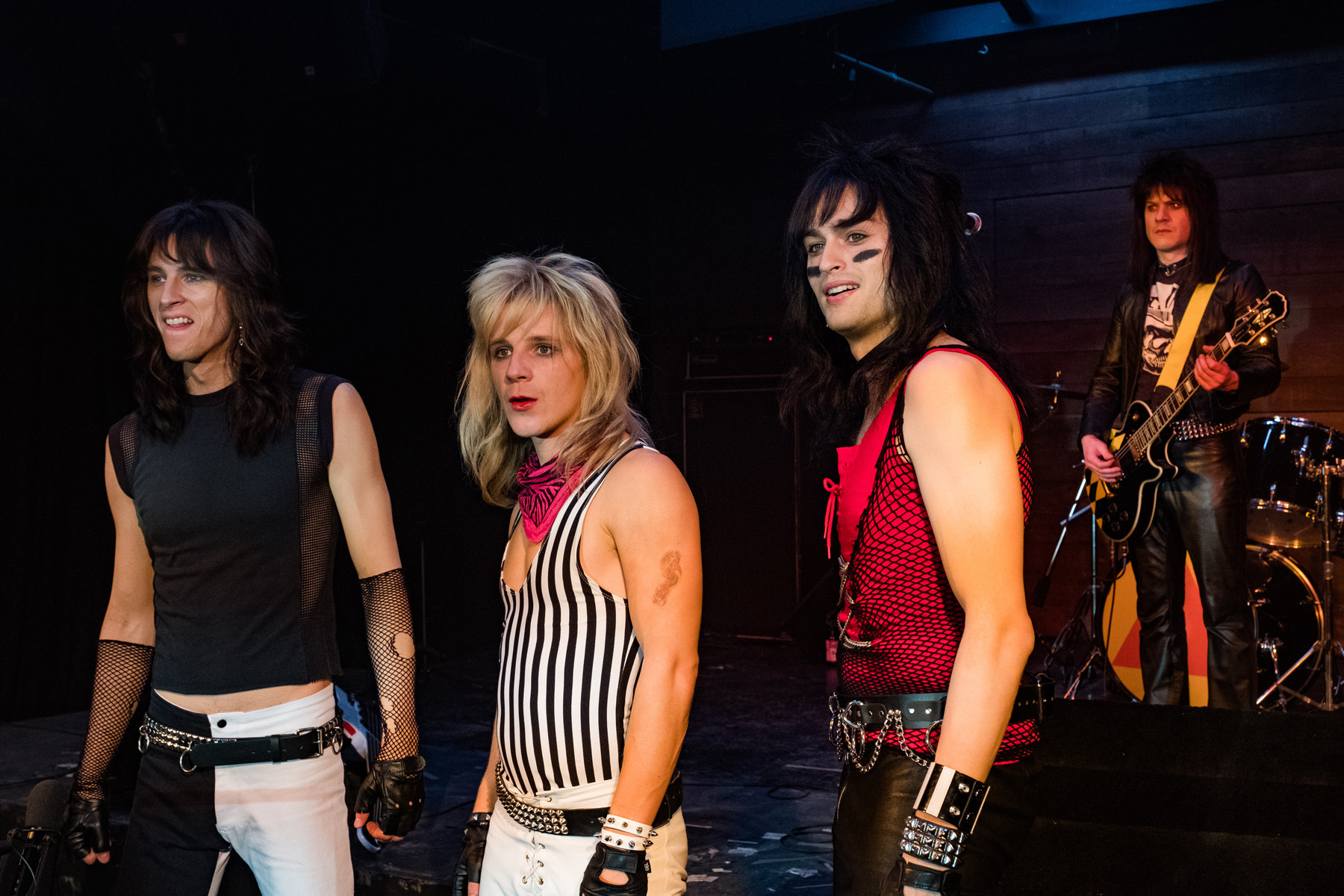 In 2001, the four members of the 1980s rock band Mötley Crüe chronicled their drug and sex laden escapades in a tell-all book entitled The Dirt. It was far more about sex and drugs than it was rock ‘n’ roll; detailing stories of trashed hotel rooms, struggles with addiction, and personal pitfalls over the sake of living the rockstar life doled out in absolute chaos. The film incarnation is, unfortunately, much of the same. Netflix’s adaptation of the tumultuous, vile story of Mötley Crüe never finds the right tone and ultimately hits all the wrong notes.

Nikki Sixx (Douglas Booth), Tommy Lee (Machine Gun Kelly), Mick Mars (Iwan Rheon), and a Vince Neill (Daniel Webber) get together in what bass player Sixx refers to as, “The worst fucking decade.” It’s the early ‘80s, and after climbing through the window into one of the group’s infamously vulgar parties, a few bars of backstory are given for each band member.

From there, we enter the cocaine, heroin, and wall-to-wall sex splattered dressing room of the band through their rise and fall, as well as their personal shortcomings. Hitting every chord of the standard, formulaic biopic, we watch as the band’s popularity is met with over-indulgence and tragedy, which leads to a triumphant finale that would leave any Crüe fan wondering if there even needs to be an encore. Not because the performance was any good, but because there must be something better than what we just watched.

The Dirt is nothing short of incoherent noise. It tries to cover a broad story, and rightfully so, but it fills the space with empty beats that ring false. Under the direction of Jeff Tremaine (director and producer of the Jackass films), there’s a lack of cohesive storytelling and structural consistency. The film has running narration, fourth-wall breaking, and a sequence of POV shots that never mesh. The tone of the film dabbles between sentimentality and raucous abhorrence at a frantic pace, never conveying authenticity or even sincerity.

Even the dialogue provokes cringe, and casual jokes about “gang bangs” during the tour come off as tasteless and wholly self-unaware. The women in the film are used more as props of domesticity or conquests, rather than being given active roles, which is quite a misfire considering the sexual escapades of the band. When the film goes for its emotional swing in the second half, the aforementioned details effectively cancel out any opportunity for us to still care.

By the time the self-destructive first act of the film has gone by, the consequences played out in the second feel more like a comeuppance. Sixx’s heroin addiction and near-death experience is a revelation that leads the band to try and become sober. While earlier, Vince Neil’s car accident in which passenger Razzle is killed is strangely trotted off as an after-thought against the narrative. There’s little incentive for the band to follow through with their sobriety and even less for the audience to follow along.

If there’s anything The Dirt gets right, it’s the portrayals of Vince, Tommy, Nikki, and Mick as anarchists in the limelight, headlining their total disregard for the rules. In an aside to the camera, Doc McGhee (David Costabile) relates that no band he had ever managed, “put me through what Mötley Crüe put me through.” The four stars revel in their indecency and unrelenting obnoxiousness, but their behavior never translates to anything deeper. After the umpteenth room is trashed or line of cocaine is snorted, the film becomes a tiring record scratching on repeat, never sounding any better.

When The Dirt was published as a book, it promoted a reconciliation of behavior and reaffirmation of the rock ‘n’ roll lifestyle that Mötley Crüe initially made notorious. Perhaps the adaptation would have worked better if presented in a different filmmaking style, aiming for a far more intimate retelling in favor of this glossy iteration. Or maybe this story is best left for fans to read in its original text. The film tries to end on a high note, leaving us to discern whether or not it’s exalting these ’80s anti-heroes or suggesting needed accountability for their behavior. By the last chord, The Dirt plays off the standard musical biopic like a familiar tune you’d be better off putting on mute.