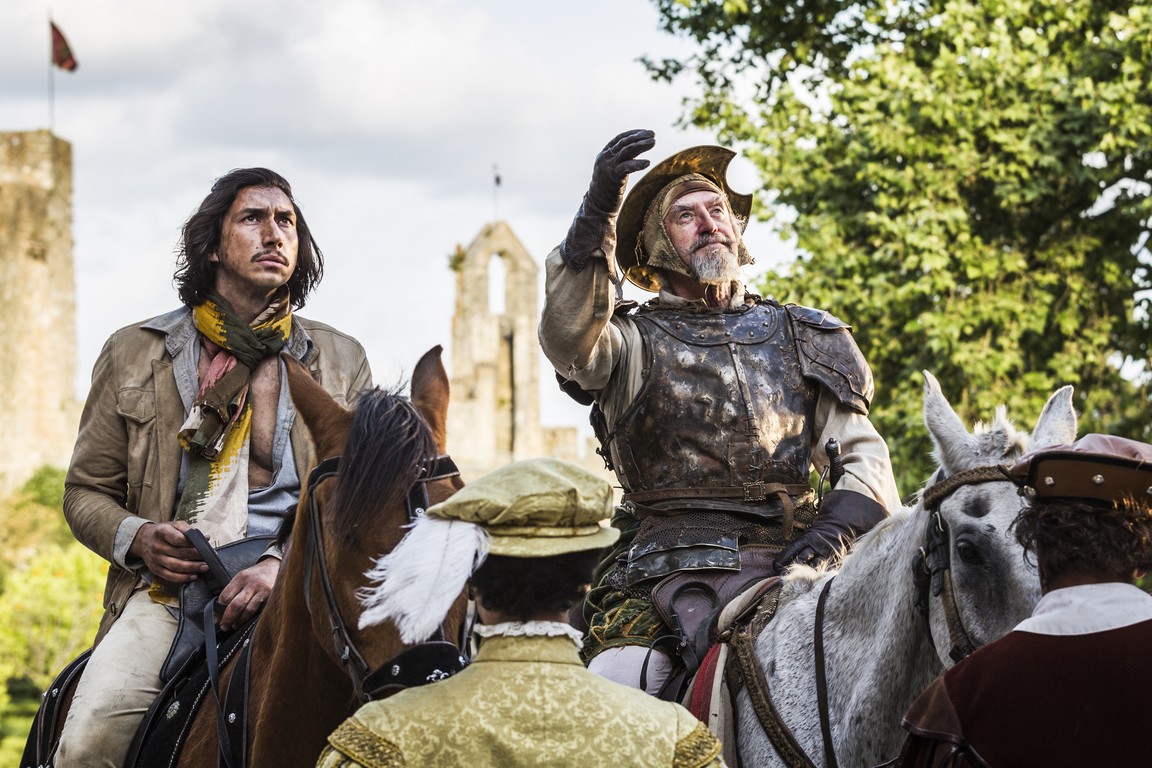 For many film fans, Terry Gilliam’s The Man Who Killed Don Quixote has taken on a bit of a mythic quality since its inception. Either fittingly or ironically, this long-in-the-works passion project centered (in part) around the literary icon is one that has often alluded the Brazil director. For the past 30 years, Gilliam has tried — with only fleeting success — to bring this mischievous fable to the big screen. Despite every intention and aspiration to make it a reality, Don Quixote yet remained a fantasy.

It went into production at least once or twice before it was hindered with rotten luck, sorrowful conditions, and grave misfortunes. Again and again, Gilliam found himself eager to tell this long-festering story and has fought battle after battle to bring the grand tale to the big screen. There were many people, particularly film lovers and the director himself, who wondered, perhaps in vain, if fortune would ever favor Gilliam, and if his dream would finally come to pass.

But in the face of great adversities, the legend has finally come true. Last year at Cannes, it was reported that The Man Who Killed Don Quixote was not only a reality, but also set to premiere at the renowned film festival. “Could it be?” many film lovers asked themselves. Is it finally here? It took a long, long, long time, but was The Man Who Killed Don Quixote going to see the light of day at long last? The answer was yes. It was here and set to premiere in theaters nationwide — if only for a mere day, thanks to Fathom Events. It was a short window, but many have been waiting practically a lifetime (by 1605 standards) to see this. And the bigger question still loomed: Was the film any damn good?

The answer is complicated.

There is no denying that seeing The Man Who Killed Don Quixote on the big screen is a deeply surreal experience, and in more ways than one, of course. And there’s no denying that it’s a deeply personal one, too, for Gilliam. In the version that was finally brought to screen, Adam Driver plays Toby Grisoni, a once-idealistic young director who has been worn down by his work in advertising. He is struggling to direct a commercial in rural Spain centered around Don Quixote and Sancho Panza, two literary icons who were once the subject of Grisoni’s student film, The Man Who Killed Don Quixote, which Grisoni directed long ago in a Spanish locale not far from his current shooting location. During a break from filming, Grisoni stumbles upon a DVD of his long-lost first feature and is flooded with memories from his earlier, more eager days of filmmaking. During a hectic day of shooting, a listless Grisoni decides to return to the place he once visited as a younger man to see if it is as he remembered it.

While The Man Who Killed Don Quixote (the student film by Grisoni, not the real film in question) was shot and finished long ago, it still lives on for an elderly cobbler named Javier (Jonathan Pryce), who was selected on a whim by Grisoni to play the title role in his early feature. Even though filming wrapped a long time ago, Javier still believes he is, in fact, Don Quixote. The disorientated actor has taken method acting to the absolute extreme, and in a wacky turn of events, he still parades around town thinking he is the valiant knight. After a series of misfortunes, Grisoni and Javier find themselves on the run and, in Javier’s aloof eyes, on a quest with little sense of direction, with Javier believing that Grisoni is, in fact, Sancho, who has returned to his side. Although Grisoni constantly tells Javier that he is not, in fact, Don Quixote, the blaring sun and their growing dehydration begin to have an effect on this weary traveler. And as they march forward, even more madness ensues.

Upon first viewing, it’s hard to make full sense of The Man Who Killed Don Quixote. And it’s to the film’s credit that it’s not supposed to make a whole lot of sense to begin with. Knowing that you are sitting in the theater and watching a film you previously didn’t know if you would ever get to see does provide an inherent dream-like quality from the start. One’s dazed perspective is only heightened by the growing absurdity of the film’s events. Gilliam is a master of lunacy. His world building is made under the pretense of hyper-realism, and his better films are often the ones that make you question your own perception of the world’s reality. Don Quixote is most certainly that type of film, and while it doesn’t shape up to be one of Gilliam’s finest, it does feel more inspired and demented than anything he has directed in the past 10 years. Or, for some folks, anything the auteur filmmaker has produced in the past 20 years, roughly the amount of time it took him to make this fever dream of a movie in the first place.

There’s no question that The Man Who Killed Don Quixote is the film that has been nagging at Gilliam for the past 30 years. It is his Great White Whale, the intangible narrative that has always slipped the storyteller’s grasp. And in its finished version, there is a weight that hangs heavily on its shoulders. There is a sense that, after years and years of trying to get this movie made, that this version is simply the one that got finished. It might not be the best or worst version we could’ve gotten, but it’s certainly the one that made it through the threshold and finally became a reality. Having sat with the film this long, constantly trying to remove all the obstacles that get in the way of realizing his own destiny, this 2019 version of the film does carry a bit of a strained quality to it, as if the inspiration is mixed with a sad sort of resignation.

Some elements that were once lively don’t feel quite as fresh as they once did. And some elements that were once blooming with creativity feel staler than originally planned. But despite the unintended sufferance that bleeds through a few of these frames, The Man Who Killed Don Quixote is — even in its more subdued, completed version — one of the most inspired and captivating works to come from Gilliam in the 21st Century. Perhaps in his whole varied career as well.

The Man Who Killed Don Quixote is a story about lost inspiration and finding your sense of purpose. It is also a story about how the artistic process can often drive a person mad, and how it can also take advantage of those who are unstable in their personal and professional lives. That has always been at the core of its own journey, and that is something that is given great thematic weight thanks to the stop-and-start nature of this film’s long, complicated trek to realization.

While this version might not be the finest we could’ve gotten, by the time the end comes to pass, you do feel the emotional power of its message, especially when you bring to mind the hard and intensive journey that Gilliam took in order to bring it into finality. The process was tremendously difficult, and it was certainly not made by optimal occurrences. By no stretch of the imagination — not even one as wild as Gillam’s — was Don Quixote brought to life under ideal circumstances. But it would be hard to ignore the parallels through which the story and the story of the story often mirror themselves, and how that results in a more enriching and satisfying conclusion.

This is truly a labor of love, complete with the ferocity and passion of Gilliam’s past work. Don Quixote is a story of a madman that could only be told properly by a madman. The utterly maddening nature of its filmmaking process, the dazed and crazed nature through which it was made, only breathes more life into this film, at least in some respects. This is also Gilliam at his most self-reflective, which is fitting considering his patient persistence and investment in seeing it made.

Of course, The Man Who Killed Don Quixote would be nothing without a great Don Quixote — even a faux one — and Jonathan Pryce is most certainly excellent in the role. He brings a great mix of levity and loneliness to the character, a lovely blend of hilarity and sadness which is often at the rooted core of Gilliam’s more successful films. While Adam Driver is good in the lead, this is Don Quixote’s story in most respects, and Pryce lives up to the challenge of playing such a well-labored part, while also respecting the hard-wrought work of his past performers: the late John Hurt and Jean Rochefort. It is this crucial element that ultimately makes the film work in spite of its imperfections. His final send-off, in particular, is among the greatest scenes Gilliam has ever directed. And it’s certainly one of the most emotionally charged.

Does it live up to its full potential? Generally speaking, no. It doesn’t. But was it worth the wait? In my humble opinion, it ultimately was. It’s a better-than-serviceable product of a director’s vision; it’s a tribute to the mad dreamers who fight through battles thick-and-thin to make their ideas realities. It feels like the reward isn’t so much the quality of the film, but rather, the mere fact that it does, in fact, finally exist in its completed form. Will it be remembered? Only time will tell. But as you watch this story, you can see why Gilliam fought so hard to give it just that chance. You see why the tormented filmmaker fought so vigorously to turn this haunting dream into a bittersweet reality. The result is a compelling and touching film, particularly as you recognize the scope and scale and passing of time that went into making it. In the end, it’s not a masterpiece. But it’s worth the journey, and it’s greatly heartwarming to know that Gilliam has proven once and for all that his Don Quixote will truly live on.