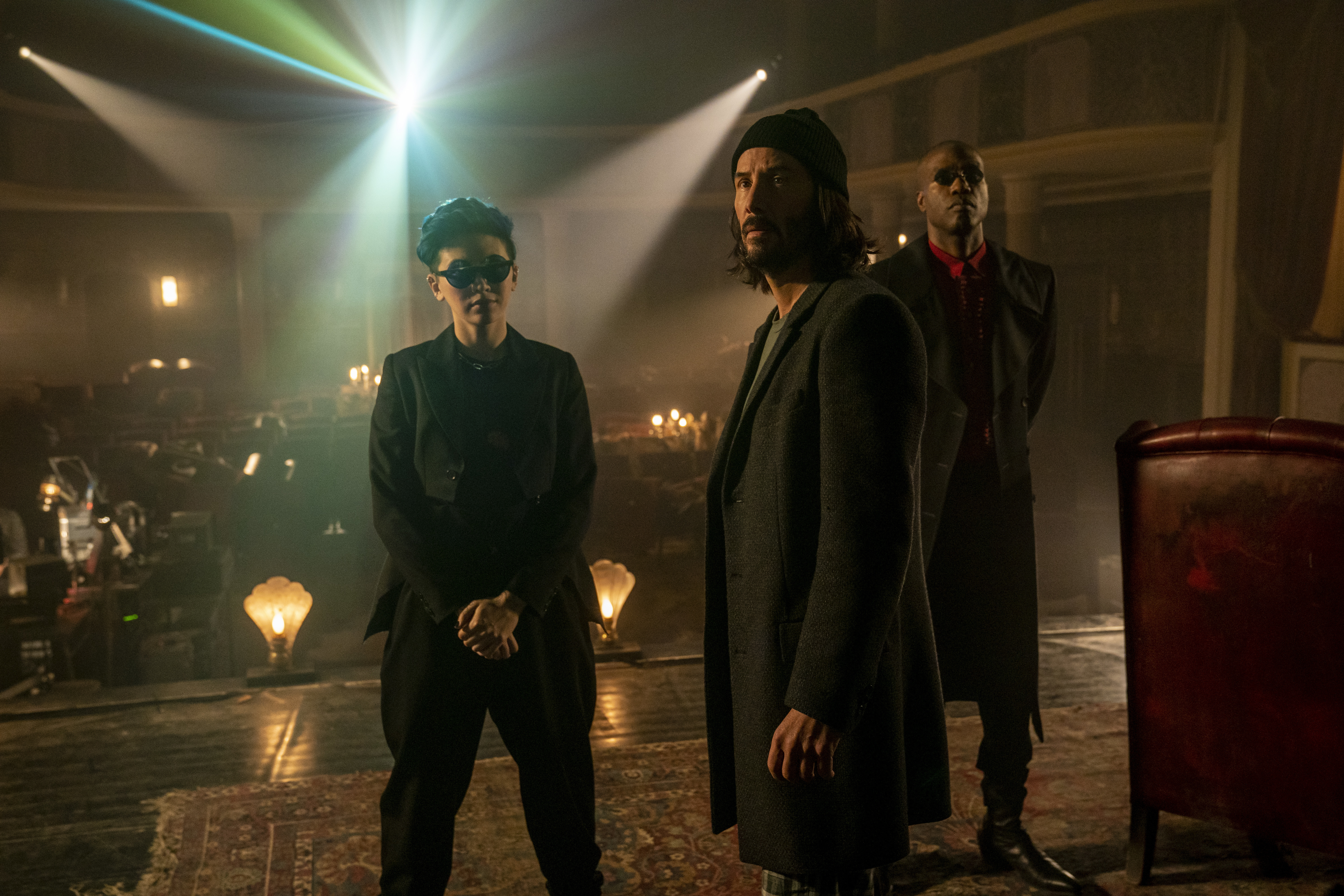 You can’t be told what the ‘The Matrix Resurrections’ is, you have to see it for yourself

By Jon NegroniDecember 21, 2021No Comments

Home » You can’t be told what the ‘The Matrix Resurrections’ is, you have to see it for yourself

The Matrix Resurrections, unbelievably, continues the story left behind in the original Matrix trilogy, which seemingly concluded with The Matrix Revolutions in 2003. Fair warning, if you’re behind on these movies, I’m about to get into what happened in that trilogy, as it is obviously relevant to setting the stakes for this long-awaited refresh.

The film begins with a somewhat faithful repeat of the first scene from the first film, but with a twist. We’re apparently watching it through the eyes of a mysterious, blue-haired observer named Bugs, played by an as-ever spunky Jessica Henwick, who has come across what appears to be a coded simulation left by someone who might be the real Neo, played once again with that same stone-eyed intensity only Keanu Reeves can reasonably manage.

A good amount of time has passed since Neo sacrificed his life, or did “the Jesus thing” as the Wachowskis famously once said, in order to defeat Agent Smith and enable a truce between Zion, the last human city in the world, and the machines who created the Matrix as a simulation to pacify and harvest energy from humanity in the aftermath of their Great War from who knows however long ago.

Much of what has happened since then is left a question mark for a good portion of the film, as we’re introduced to Thomas Anderson, the original alias of Neo from the first film and of course reprised by Reeves with his more modern, long-hair-beard John Wick look, living a seemingly normal life in San Francisco, where ‌”The Matrix” is a video game he created in the late 90s. And Thomas’s boss, played by Jonathan Groff, insists that he needs to create a sequel to the game in order to please the fans, even though artistically, that would be a very bad idea, indeed. Get it?

Thomas, or Neo, or whoever the Matrix hell, regularly meets with a psychiatrist, played by Neil Patrick Harris, who quite literally feeds him blue pills that will help him push down the odd occurrences he continues to see in everyday life, as if something extraordinarily odd and unexplainable is going on in his ordinary, explainable life, but he can’t place the glitch. There’s even a woman in a cafe he’s somehow magnetically drawn to, who also happens to look exactly like Trinity, played by Carrie-Anne Moss. And yes, there’s an overcoat-clad man, played by Yahya Abdul-Mateen II, who eventually comes into Thomas’s or Neo’s or whatever you like’s workplace with guns blazing, assuring him that he has the answers to what exactly is going on.

This is only a morsel of what to expect in The Matrix Resurrections, which is a deliriously unpredictable comeback story for a franchise that honestly doesn’t need a sequel. But even the film says as much directly to the audience and finds clever ways to feed that tiresome, intellectual property overload mentality into the narrative for a purpose.

While watching this, it’s clear that Lana Wachowski (who directed this without her sister, Lilly, and shares writing credits with her Sense8 collaborators David Mitchell and Aleksandar Hemon) is repulsed by even the idea of taking these films and churning even more money from them. There’s ample commentary within the film that even sleepy moviegoers will pick up on, like when our Morpheus stand-in (Laurence Fishburne does not reprise the role, sadly) mentions how “we’re all trapped inside these strange, repeating loops,” clearly pointing to the loops of blockbuster franchises going back to what worked before and obeying the algorithm of nostalgia, essentially.

Warner Bros. reportedly approached the Wachowski sisters for years, relentlessly proposing they make another Matrix film, so there’s a reason only one of them returned to do so, but the good news is that Resurrections is apparently a film she made on her own terms, as this is far too individualistic and “weird” for your typical legacy sequel, at least in the most important ways

Admittedly, there are far too many times when the film does the Force Awakens thing (or Space Jam: A New Legacy thing, if we want to be more recent), where it repeatedly reminds you of the older films for no reason other than to elicit a basic, knuckle-brained reaction, which doesn’t fit the original’s more mindful depth and standalone power (even for the sequels). We often see clips from the original trilogy throughout the film, usually to add context like a character briefly glimpsing a repressed memory. And while it’s a nice idea for the purpose of the script, it’s actually a bit sad to see such crisp, tantalizing cinematography for only a fleeting moment before we’re pulled back into the overly clean, pop pop style of this new entry.

Now to be fair, the packaged studio sheen of Resurrections is absolutely intentional. Part of the running gag is that Lana Wachowski wants to poke and prod at the studio system and the most lampoon-worthy perils of this century’s tech-addicted decade. And yes, the visual effects are often astounding, with much of the fight choreography and overall stuntwork matching nicely with the sunnier, brighter golden hour look of this film. The sun is actually out in this version of the Matrix, and yes, it’s off-putting at first. It sort of needs to be. If this were simply another Matrix installment with the same cinematic language, down to the night filters and green coating, it would be a culprit of the same criticisms Wachowski wants to lay at the feet of modern tentpoles.

Is it deja vu? Perhaps so and perhaps too often. The climax is especially flat in terms of giving these characters an action rumble anywhere close to as satisfying and memorable as Revolutions or the 1999 original, to be sure. There are even some characters who pop in for extended cameos, and while it’s perfectly pleasant to see most of them again on a pure trivia level, a lot of them only subtract, not add, from the urgency and intrigue of what’s happening with Neo and these new, interesting characters we get to meet and spend not enough time with.

As for Reeves and Moss, there’s no question these two were apparently thrilled to reprise their roles once again. It’s easy to argue that their stories sort of ended on an abrupt note in the last installment, and the way they get worked back into the plot is almost charming in how hokey and self-aware it is. If any film franchise has room to be this meta, it’s certainly The Matrix.

‌The Matrix Resurrections clocks well over 2 hours, but by the end, it’s easy to think this is only the beginning of something. I hesitate to even call it The Matrix Rebooted, despite the easy layup of that connection, because that title almost makes it sound like a cheap, easy unplug from the wall, when this is really a softer, more painstaking examination of the prior films and the possibility of what a Matrix movie could look like in 2021 and beyond.

And to put it as simply as possible, The Matrix Resurrections is one of the few sci-fi films in 2021 with this much personality. A willingness to goof around, crack jokes, and inspire hours of philosophical discussions that will be far more deep and profound than what you started with while viewing this film. It’s nowhere near as innovative and generational as its forefather, but there’s something disarming and affectionate about how hard it tries not to be.

Lana Wachowski was given an impossible task, to make The Matrix relevant and timeless again, and to push it past the misconceptions its “red pill blue pill” concept has unfortunately been twisted into over the last 20 years. Rather than go back to basics, Wachowski and her team apply the same creative principles of the first film to Resurrections, albeit with some unfortunate fan service modifications some will find regrettable. But if you’re willing to plug into this virtual wonderland for something bold, sparkling, and occasionally counter-intuitive, then The Matrix Resurrections might be your new favorite shock to the system.

The Matrix Resurrections opens in theaters everywhere starting December 22. It will also be available to stream on HBO Max for 30 days.