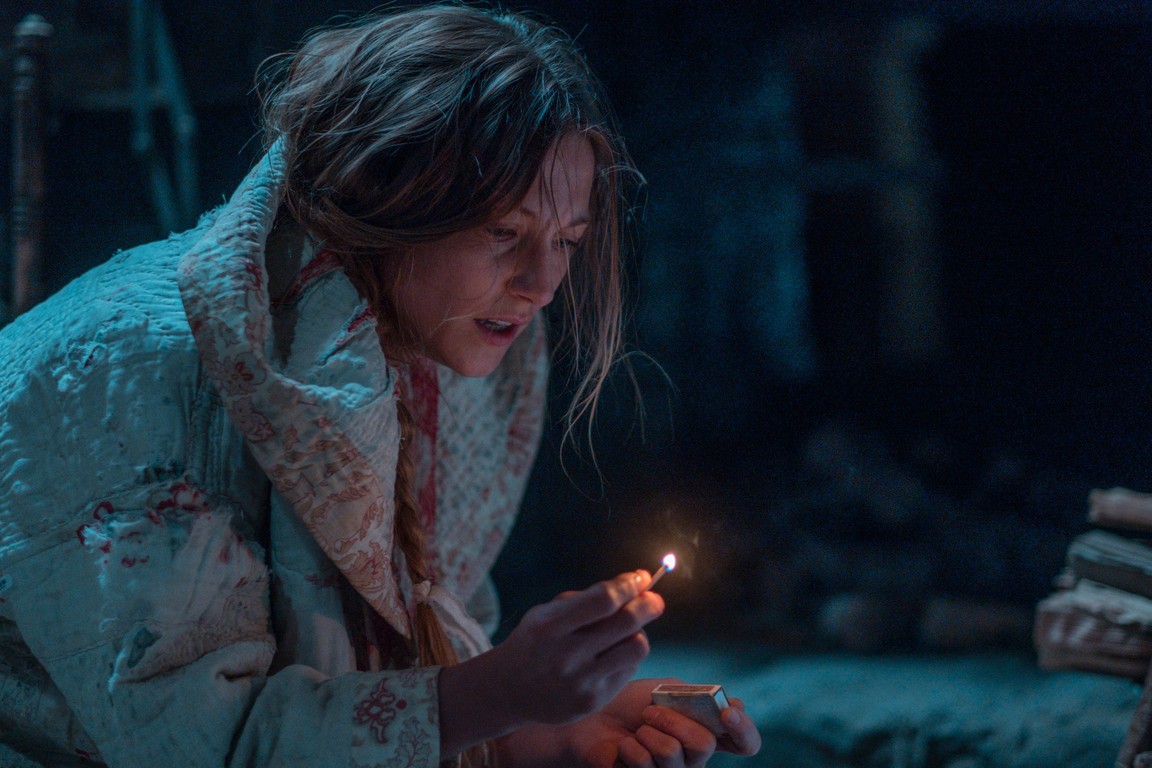 ‘The Wind’ Review – A Stunning Western Horror, But Certainly Not a Breeze

Home » ‘The Wind’ Review – A Stunning Western Horror, But Certainly Not a Breeze

In the light of day, the American prairie is an open and endless field of grass. Landscapes of the Old West stretch on for miles, and the golden plains evoke a warm, welcoming feeling. But at night, the howling wind creeps in through the windows. Candles flicker and the once open country becomes a claustrophobic nightmare, where nature speaks and shrieks. This is the visage first-time director Emma Tammi captures in The Wind, a psychological western-horror hybrid with haunting elements that work separately, but never coalesce into something truly frightening.

After the death of their neighbor Emma (Julia Goldani Telles) and her unborn child, Isaac (Ashley Zukerman) leaves his wife Lizzie (Caitlin Gerard) to send off Emma’s widower, Gideon (Dylan McTee), back to his home in Illinois. Left to her own devices, Lizzie goes to battle with an invisible demon; one only heard through the terror and power of wind. Intercutting between memories and leading up to Emma’s death, Lizzie tries to parse together what is real and what is not.

It’s a dark and lonely place to be in the middle of these grasslands, and Emma Tammi captures so effectively the exposure and danger of the developing West. With huge credit to cinematographer Lyn Moncrief, The Wind is a beautiful picture to gaze upon, as it balances the warm hues of sun-struck days and the unsettling shadows of the night, playing off visual tension as its best strength. Strong performances from the core cast — notably Caitlin Gerard as Lizzie — bolster the material where open plains and close quarters sustain a neurotic space of psychological torture.

All of the ingredients for a staggering and shocking horror film are there for Tammi to arrange, but the story never molds into the demon it wants to be, unfortunately. The Wind’s greatest shortcoming is its non-linear storytelling. We’re never clued in to the immediate story, and ambiguity rides the wind here, leaving us struggling to keep up.

The mental gymnastics in following where the narrative is going, through flashbacks and present day, eventually does come together, but by this point, we would rather see the downward spiral of Lizzie and Emma play out from the beginning, rather than try and gauge where the tale will jump to next.

Tammi impressively conveys a macabre atmosphere, but these strengths can only take the film so far. The mythos of the story, which centers around demons and religion, is never fully developed. The Wind teeters more toward introspective horror, as Lizzie seems to lose all sense of self and reality, than an effective haunting. It’s one scare after another until the windows come crashing in on Lizzie and the pieces of broken glass broken in by The Wind are never put back together to deliver a clear message.

All that said, there’s a frightening story here worth telling. The Wind creates a howling atmosphere with a landscape of utter melancholy, and it showcases a lot of promise for Tammi in her debut. She effortlessly sets a memorable mood and plays with the dark tone of the film throughout. Visually, The Wind is rendered beautifully, but there is a lack of density and clarity to the story, giving too much to ambiguity and not enough to succinct storytelling.

A clear choice is never made between the psychological elements and the haunting of the open plain. Instead, strong performances and stunning landscapes carry a film that begins with great potential, but ultimately falls short on its own terms. It’s an inchoate tale with core ideas worth exploring, but they simply don’t flow as gracefully as the unseen specter we are meant to fear.