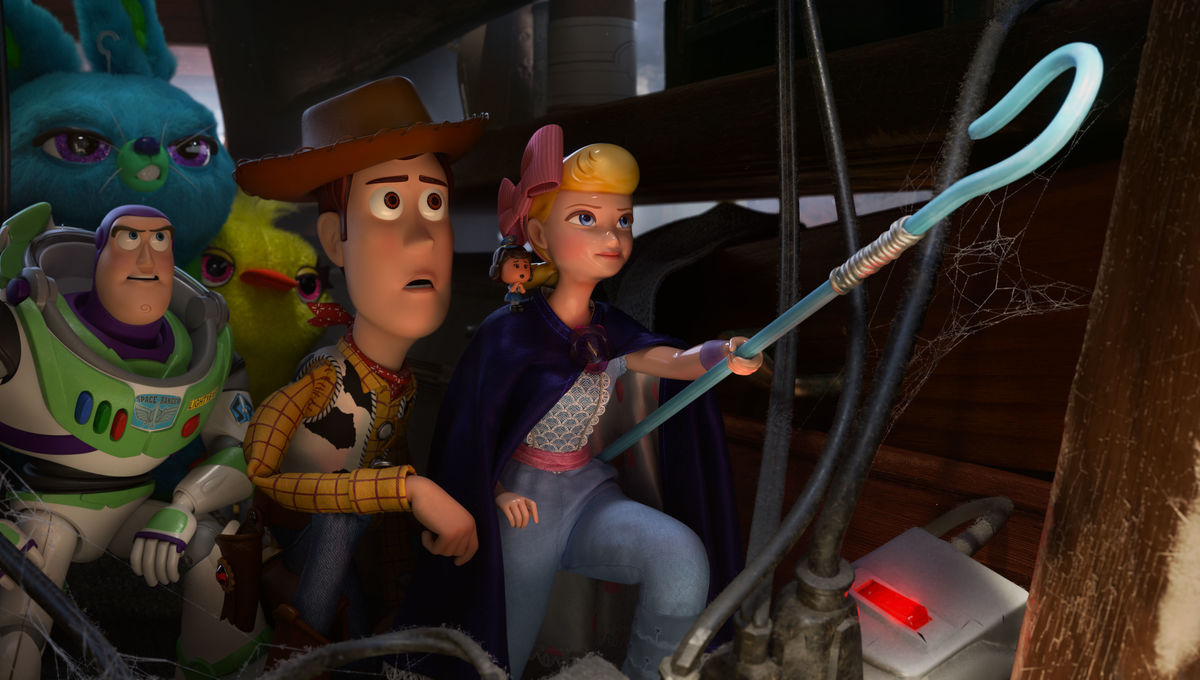 The Toy Story movies have always been filled with lots of toys, and rightfully so. But every film so far has mostly played around with the character of Woody the cowboy doll. His story has progressed both positively and negatively to some extent over the years, from his fear of being replaced in the first Toy Story, his fear of being thrown away in Toy Story 2, and his fear of being forgotten in Toy Story 3. Almost a decade later, Toy Story 4 confronts a new fear for Woody that not very many family movies even attempt to tackle: a fear of no longer having a purpose.

At the end of the previous film, Andy gave his childhood toys over to Bonnie (voiced this time by Madeleine McGraw), who is the new kid playing with Woody (Tom Hanks), Buzz (Tim Allen), Jessie (Joan Cusack), and the rest of the toy box gang. But Bonnie isn’t Andy, so Woody is no longer the favorite toy in the room. Over time, it becomes obvious to Woody and everyone else that Bonnie doesn’t need him in the same way Andy did.

To make matters worse, Bonnie has “made” an entirely new kind of toy: a spork with googly eyes, pipe cleaner arms, and popsicle stick legs stuck together by gum. She writes her name on the toy and names him Forky (Tony Hale), prompting the lofty rules of Toy Story to kick in and bring the arts and crafts project to life.

Even though Forky becomes Bonnie’s most cherished toy, he’s unhappy with his new existence and constantly tries to escape and return to the trash where he thinks he belongs. Woody sees this problem as an opportunity to renew his sense of purpose by secretly keeping an eye on Forky at all times and ensuring Bonnie doesn’t lose him.

Pixar movies have generally excelled at exploring basic psychology for adults that also makes enough sense for kids to understand. Woody’s jealousy of Buzz in the first Toy Story, for example, could be felt by a child worrying that a new sibling had become the favorite. While parents could still connect with Woody as a parental or guardian figure to Andy, especially in the later movies.

Toy Story 4 certainly has a more adult sentiment to its tone than usual, to the point where the main plot is essentially a love story. During a road trip to a charmingly-realized small town called Grand Basin, Woody happens upon Bo Peep (Annie Potts), who we learn became a “lost toy” in between Toy Story 2 and Toy Story 3. The rekindling of a possible romance between the two reminds of adults in their later years, reconnecting with “the one who got away.” The lost toy is a lost love and all that.

The romance in Toy Story 4 is a strong point of the film, mainly because Bo Peep is a wonderfully engaging presence, even without it. She’s more active and interesting to watch in this film than the previous iterations, because as the story explains, she’s had to survive on her own for quite some time, which is dizzying for Woody, a toy who chose the more comfortable life. The main thrust of Toy Story 4 is the struggle to embrace change in old age, accept your limitations, and make the best out of new circumstances.

As expected, Toy Story 4 continues the tradition of these films to contrast complex themes against a fairly simple plot with only a handful of locations. The film is about as breezy as Toy Story 3, as concise as Toy Story, and surprisingly as manic as Toy Story 2, with an oddball humor that was mostly missing in Toy Story 3, the least consistently silly out of all these films thus far. This is helped in no small part by wonderful comedic roles from some new side characters voiced by Keanu Reeves, Keegan-Michael Key, Jordan Peele, and Ally Maki.

And considering this is Pixar, It should be no surprise that the film is brilliantly animated and attractively decorated down to the finest details. Grand Basin and its local spots are seemingly lived-in destinations, serving as splendid backdrops, not distractions, to the more urgent story. It’s almost a shame most viewers won’t even catch a fraction of the amount of effort that clearly went into making Toy Story 4 as fluid and graceful as it is, complete with a nostalgic tint to almost tangible antiques and buildings that will ring true for older generations. And the story may not be as immediately relevant to younger viewers, but the presentation will utterly captivate them.

And yet Toy Story 4 still feels like it’s missing something, a crucial ingredient, perhaps, that can justify its existence to even the sourest nonbelievers. It can’t serve as a payoff, because the first trilogy used the one that mattered. It doesn’t even try to launch a new trilogy, necessarily. It can, at times, feel like an extended short film, padding out the series with just one more adventure. Just one more thing before we go.

Even the villains in the film come off as nonessential. Though each beat successfully moves the story forward in a meaningful way, the main antagonist proves to be closer in spirit to someone we’d see on the Disney Channel, as in a misunderstood, but ultimately harmless bully who goes a little too far at times, far less intimidating than Lotso from Toy Story 3. Thankfully, the writers did find a meaningful way to tie the villain into what really matters: the future of these characters and what we can imagine for them next.

It’s easy to see how enamored the filmmakers were behind this concept of discovering your purpose after accomplishing everything you set out to do in life. In many ways, the fine folks at Pixar have accomplished more than anyone could ask of them, creating some of the best animated films in the last two decades, complete with one of the best film trilogies ever released.

For them to return to the Toy Story franchise after such a narratively satisfying conclusion nine years ago can drive many to wonder about the decision from a cynical, cash-grabbing angle. But a more generous assumption is that these storytellers saw a chance to go even deeper with a story arc that wasn’t quite finished. If Toy Story 3 was the emotional climax of the Toy Story films, Toy Story 4 serves as a fine enough resolution.