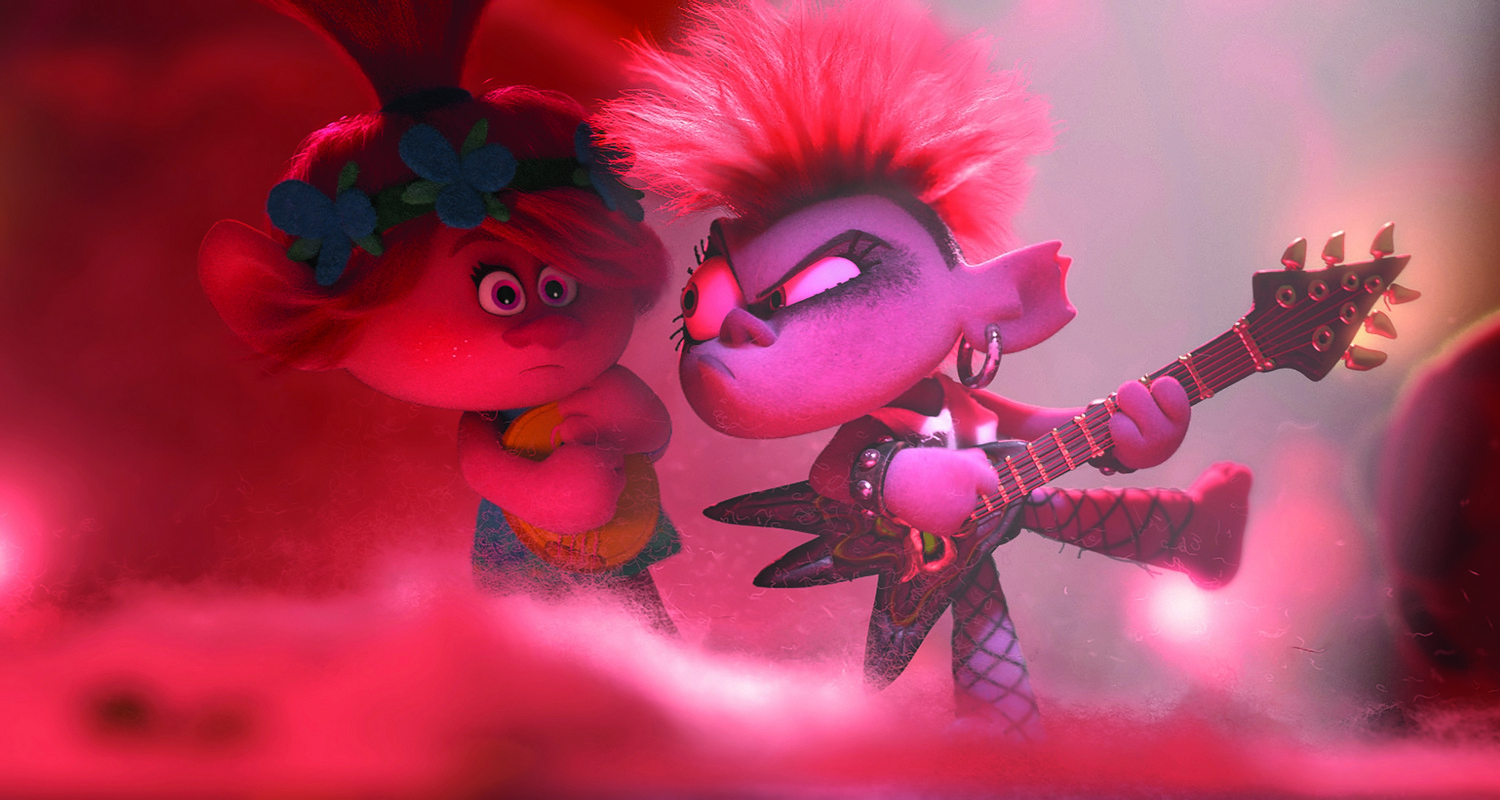 Harmony is a utopia. But at what cost? The denizens of Trolls: World Tour, a sequel to the well-received DreamWorks Animation film from 2016, begin this self-examination in segregated exile. What is the world of Trolls if not a watermark of our own “United” States? Because these trolls are a lot of things, but united is certainly not one of them.

The first Trolls concluded with a promise between troll and bergen, to resolve their differences with emphatic song. Fittingly, the sequel opens with no bergens in sight, but instead a new civil strife between the trolls themselves, now using song as a weapon. The newly-queened Poppy (Anna Kendrick) takes on the herculean task of assuming these differences already reconciled, venturing with her recently friend-zoned ally Branch (Justin Timberlake) and Biggie (James Corden) to the other troll realms in search of aforementioned harmony for their music and culture.

You see, we learn early on in World Tour that at one time, all trolls lived together, despite their differences, under the cold guidance of six god-like strings, which govern the major and minor chords of musical influence. Music has always been an ongoing progression of cultural appropriation, so in Trolls: World Tour, this is carried over with stickers and needle-drops, assuming the infinite ubiquity of historical sounds in its mythological retelling. But the trolls split up into their own camps of musical theory: country music, funk, classical (don’t ask), hard rock, and pop, as emblemed by our main characters.

Like in so many of pop culture’s prodding of the medium, hard rock is of course the antagonist. Led by Queen Barb (Rachel Bloom), the aggressively cool and likable rock trolls are unsurprisingly stubborn and set in their tastes. Like a Fire Nation run amok, they are determined to spread their obvious prosperity of 70s and 80s melodies to all those who dare synthesize. The film’s first major reveal, Ozzy Osborne, will be sure to elicit gasps and invisible fist bumps among the film’s scores of virtual disciples.

The film is indeed a world tour. Just about every facet of popular music that isn’t hip hop is explored and mined for licensing bragging rights. It is no wonder Poppy’s main character flaw is an inability to truly listen to criticism and ideas of a better way, a common downfall of pop music at large. Branch, like so many of his generation, is supremely fixated on his lust for Poppy, a brighter troll with more agency, misguided as it is. Leaving us with a smattering of side characters who do little more than add to an already crowded chorus. Rather than reveal the depths of Reggaeton, World Tour demotes it and K-pop to a dance-off cut short. Yodeling is a punchline, as expected, and the final song could perhaps rival Epcot for its coat of many cultures, crammed into one space for economical convenience.

Many will be surprised to find a grand total of three layers to be discovered in Trolls: World Tour, an otherwise unassuming encore for a film animated to be as bright and colorful and fleetingly enjoyable as candy. World Tour is its Hershey Bar, perhaps with almonds. Richer, in terms of animation budget, but best exercised in moderation. Too much of the same candy will make us sick. Too much of the same music? I think you can complete the thought.

Because we are the real trolls. Hiding under our respective bridges, satisfied with our scraps, confusing our burial for refuge. In this way, Poppy and her cohorts preach rehabilitation through a marriage of nostalgia and pandering. Children will hear these songs. They will promptly recognize them from the radio. They will download these songs, perhaps even illegally, in their rawest form. Only then, will we as a society regret the erasure of hip hop on their psyche. The only music that would have prepared them for these unforgiving political times.

And now, a less serious review of Trolls: World Tour.

It’s fun! I had a good time. I liked the trolls who made a pinky promise. That was a funny joke. Was that Sam Rockwell?