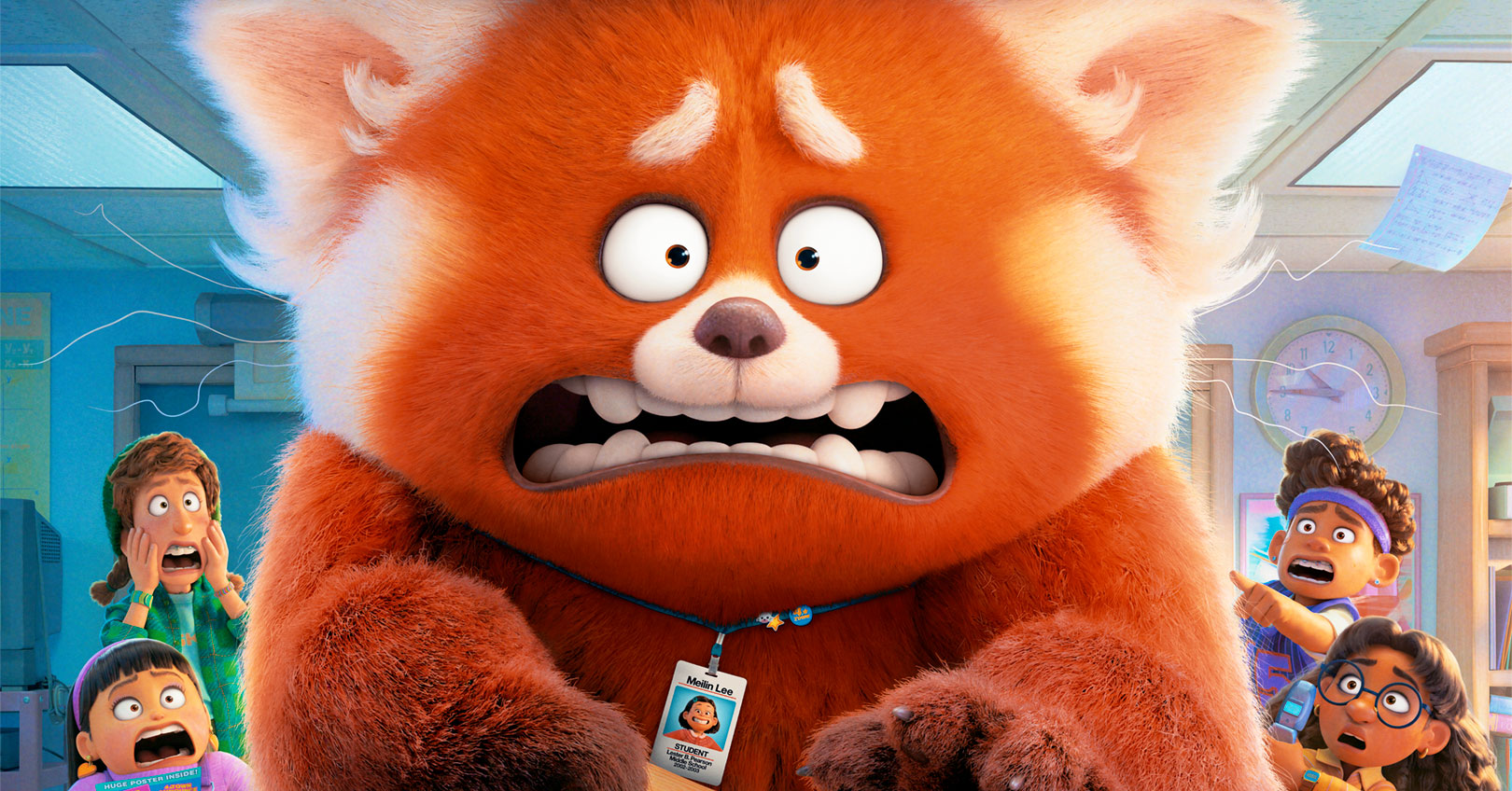 ‘Turning Red’ is pretty wild, even for Pixar

By Jon NegroniMarch 8, 2022No Comments

Home » ‘Turning Red’ is pretty wild, even for Pixar

The following review of Turning Red is an edited transcript of the video above.

Turning Red is the newest animated film from Pixar, this time directed by Domee Shi, who helmed the bizarre, but lovable short film Bao, which opened Incredibles 2 in 2018. It was a splendidly weird animated short, so I was quite happy to hear that Shi successfully pitched an original feature film idea to Pixar shortly before Bao was released, and here it is. And wouldn’t you know it, once again Shi made something bizarre, lovable, and splendidly weird. She’s just sort of good at doing that, apparently. Also worth noting that this is the first Pixar film solely directed by a woman, which is long overdue.

The film takes place in Toronto, Canada exactly 20 years ago, which is only 2002 unbelievably enough. And the story follows an energetic 13-year-old girl named Mei, voiced wonderfully by Rosalie Chiang, who mysteriously finds out that when she gets too emotional—so too angry or sad or excited—she inexplicably transforms into a giant red panda, to the point where a plume of red smoke appears and she has to calm herself down in order to revert back to “normal.”

As you can imagine for a middle schooler, trying to keep a lid on your emotions is hard enough when experiencing typical puberty, which is where Turning Red has a good bit of fun exploring a heightened, fantastical take on figuring yourself out at such an awkward age, between hanging out with your oddball friends and going to boy band concerts and appeasing your parents’ wishes without losing sight of the person you are growing into.

I don’t want to give too much away when it comes to where the story of Turning Red goes once Mei finds out what’s going on with her transformation, specifically why this is happening to her and what she has to do in order to stop it. Not because the plot is all that surprising in terms of what its life lessons are, but because the way it gets to its narrative destination is where the film finds its true stride. The unexpected, consistent humor.

This is far and away the funniest Pixar film in quite a long time, perhaps since Finding Nemo. At least in terms of sheer comedic writing and how the film carries a lighthearted tone throughout. Pixar films often weigh a lot of whimsical amusement against more serious emotional beats, but Turning Red goes for a balance more reminiscent of Finding Nemo and Toy Story 2, where the heart and melodrama are certainly there, but more in service to the feel-good, hysterical wisecracking, not the other way around.

Though Turning Red does deserve quite a lot of credit for delving into harsher, trickier feelings exhibited by the main character, specifically wrath and anger, which most animated films aren’t really brave enough to let their protagonist sort through. Even Pixar’s other film along these lines, Inside Out, used the personification of “Anger” more as a punchline, not a serious moment to tackle in the film because it was focused on Sadness. So it works out well for Turning Red to try something different. It’s a risky move, but in typical Pixar fashion, well worth it, because it therefore uncovers some poignant insights that make the film feel wholly unique.

Turning Red is certainly one of those films trying quite hard to be subversive and narrowly managing to get away with it. In other words, it breaks a lot of rules, but doesn’t do so at the expense of telling a compelling story. For example, the relationship between Mei and her mother, voiced by Sandra Oh, isn’t just a replication of contentious mother-daughter relationships we’ve seen in countless other family films, especially Pixar’s Brave.

Mei and her mother aren’t constantly at odds or unpleasantly bickering with one another all the time. In fact, the film opens with a touching scene establishing how much Mei looks up to her mother and wants to make her proud, and how her mother in turn reciprocates that love and pride, albeit sometimes a little too far. The dynamics gets a little Ted Lasso, at times, but it’s certainly a refreshing change of pace, when most kids’ films tend to go for parents and their children not seeing eye to eye, so we have to spend an entire movie getting them to see eye to eye. Without giving anything away, the rift between Mei and her mother is far subtler and more nuanced, and it’s one that takes real effort for the characters to even acknowledge, let alone try and resolve. It’s stellar writing that also manages to ooze relatability.

This is also a very different Pixar film when it comes to its heightened animation. The story is told through Mei’s perspective, so there are a lot of cartoonish moments and whiz-bang energy to match the tone. It might take some getting used to for ardent Pixar fans who expect the studio’s more grounded approach and sense of weight and physics, at least when dealing with human characters.

Turning Red isn’t quite as bombastic as your usual Illumination or DreamWorks feature, or something like Mitchells vs. the Machines, for example, but it’s a lot closer to that style than any other Pixar film yet. And the good news is that it does work for this film because you can tell the animators had a seriously good time putting these set pieces together and stretching themselves a bit more than usual. It’s not the most gorgeous Pixar film, sort of by default because its 2002 urban setting is a bit flat and uninteresting when Mei isn’t painting the scene with her imagination. But again, it comes off as intentionally bland and unremarkable, because it makes Mei’s red panda all the more remarkable.

There’s plenty else to get into with Turning Red, but I’m happy to leave it there for now. In just about all my Pixar reviews over the last decade or so, I’ve repeatedly pleaded with the studio to get even weirder and bolder with their material. At times, they certainly come through, and I’ve been more than pleased with their recent output than not. But Turning Red is something a bit more special. Not that it’s soundly superior to Luca or Soul, but more-so that it has a pop-culture shattering appeal, or at least the potential for such, all over it. I don’t expect it will have an impact as transformative as Disney’s in-house creation Encanto, since it doesn’t have a surprise pop hit song to keep it in the mainstream ether long, but it will hopefully find its audience in time.

Pixar aficionados should have a lot to get excited about with Turning Red. It won’t make you feel deep, existential sadness the way Pixar is known—or meme’d—for, but is there such a thing as deep, existential laughter? If so, here’s that.

Turning Red will be available to stream on Disney+ starting March 11.