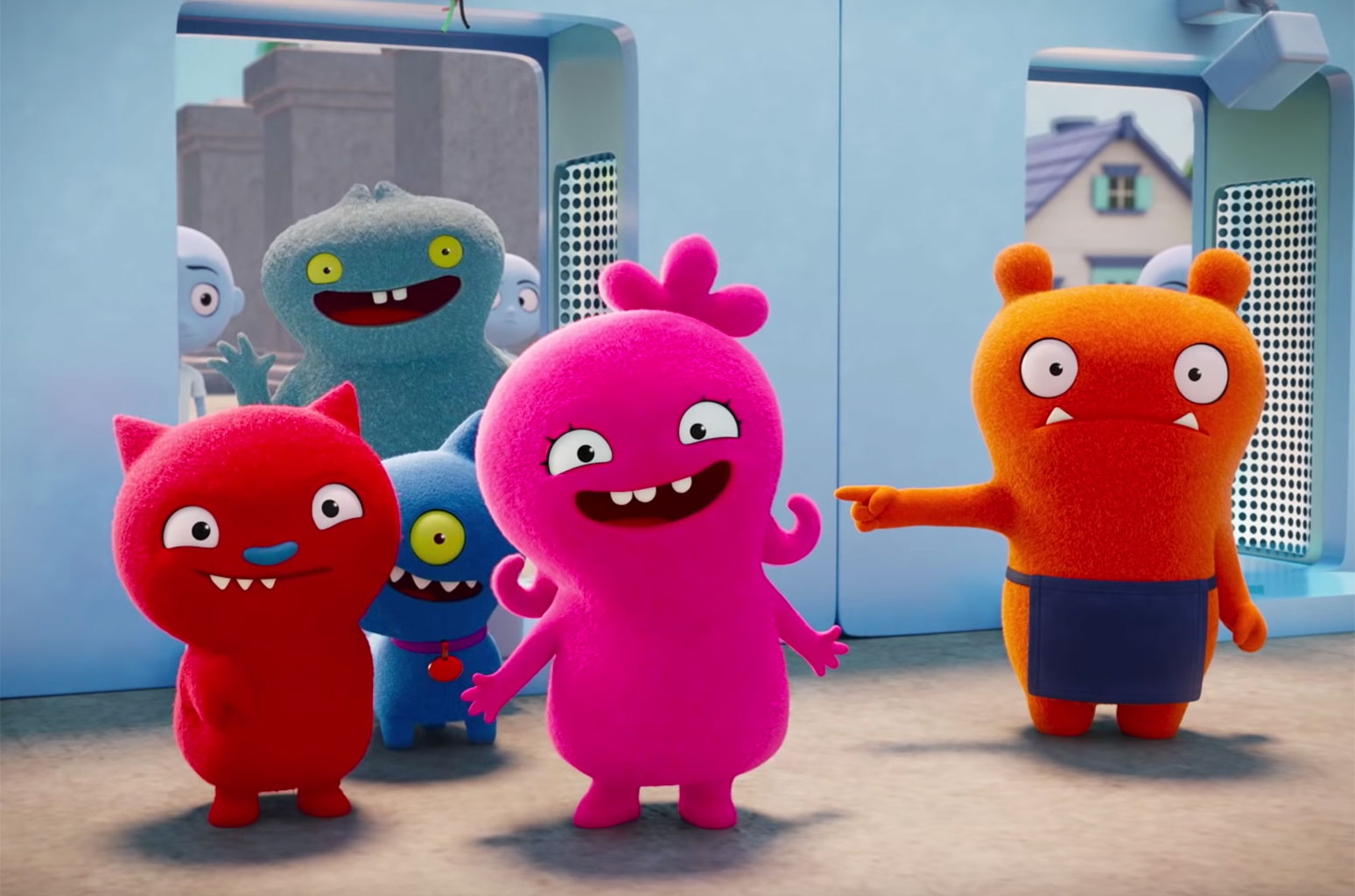 For reasons that may be obvious, critically analyzing a film intended for children can be a difficult task. There’s a prevailing notion that kids, due to their general lack of experience, have very low standards and will eat up whatever colorful media they’re given. There may certainly be some truth to that sentiment, given that children and adults consume art very differently, but one of our responsibilities as critics is to thoroughly clarify how disparate age groups might react to a film, especially one made for kids to enjoy.

After all, the vast majority of children aren’t going to the movies alone, and they probably aren’t reading reviews beforehand either, so it behooves us in these circumstances to point our observations to those of the disgruntled authority figures who find themselves temporarily trapped in a theater during a weekend matinee

The only reason I bring all of this up is because UglyDolls is a curious film to review when it comes to its age-based appeal. Inspired by the semi-popular plush toy line of the same name, the film comes to us from STX Entertainment and is directed by Kelly Asbury (Shrek 2, Gnomeo & Juliet), and features an all-star musical voice cast.

The story takes place in a fantastical representation of a mechanical doll factory, in which the defective models are discarded through a metal pipe to a town nicknamed “Uglyville,” where everyone is happy and beautiful in their own way.

The thematic ethos of the film can be guessed wholesale within minutes, and it never goes in any remotely surprising or interesting directions. The design of Uglyville, though colorful and ostensibly full of personality, is actually rather dull and uninspired. There are a handful of mildly clever visual gags, but it rarely stretches beyond transforming everything in sight into yarn.

The plot kicks in when Moxy (Kelly Clarkson), an energetic pink doll, convinces several of her friends to join her on a quest up the metal pipe to the “Real World,” where the love of a human child can be felt. They discover another town called “Perfection,” where the “pretty” dolls are trained for the trials of the real world under the guidance of Lou (Nick Jonas), an arrogant yet magnetic template for the dolls to follow.

The plot advances into territory that’s far more intricate than it needs to be, involving such cliches as spies, lies, and the brink of defeat, and it all feels frustratingly unremarkable. The occasional laugh-worthy joke sneaks its way in at times, but the film takes no steps to transcend its own familiarity, and it makes far too many mistakes along the way to be pardoned as harmless pablum.

The fictional world on display here is distractingly nonsensical, in that it’s impossible to make sense of how this world works on any practical level. The various plot points throughout appear to be lifted directly from other movies (specifically Toy Story 3 and Monsters Inc.), with little effort taken to subvert or separate itself from these other, superior films.

Worst of all, UglyDolls also functions as a musical, and while many of the songs are admittedly somewhat catchy (which is to be expected given the musical pedigree of the cast), none of them serve any significant narrative function, and in some cases they actively work against the narrative. The opening number, in true “Everything is Awesome” fashion, celebrates the excitement and appeal of Uglyville, which insidiously paints the town as a virtuous place to live, therefore prematurely undermining Moxy’s aspirations of escape.

A later song sees Lou, the villain of the film, chastising the other dolls for their slight imperfections, only to have every last doll swoon for him regardless. A third number sees Mandy (Janelle Monáe), an insecure “pretty” doll, give an over-the-top makeover to the “ugly” dolls, even though this actively works against what is clearly the point of the whole story.

There’s certainly a semi-admirable sense of irony present in each of these numbers, but I doubt any child will be able to pick up on it, and the catchiness of the songs may even subconsciously reinforce the negative mindsets the film is advising against. That may be a bit of a stretch, but the musical numbers are, oddly enough, too smart for many kids to truly understand, and everything in between is too thin and simplistic for adults to appreciate.

With all that said, I will acknowledge that the cast is certainly putting effort into what they’re doing, and there’s a genuinely positive emphasis on compassion that I think can prove to be a positive influence on any kid watching, even if it’s all contained in an out-of-nowhere moment within the ludicrous climax (the less said on that, the better).

There are far more negatives than positives in UglyDolls, but when it came to deciding how bad it was from an adult perspective, I had to admit that I didn’t actively hate it from beginning to end. It’s mercifully short at 91 minutes, and it features enough glimpses of life throughout its scenes to get an agreeable audience through the experience in one piece.

But ultimately, the film often feels like disposable filler in between sold-out showings of Avengers: Endgame. There are certainly worse movies for kids out there, but there are also so many better ones more worth seeking out, and like the dolls themselves, they don’t have to be perfect to be worth your time.