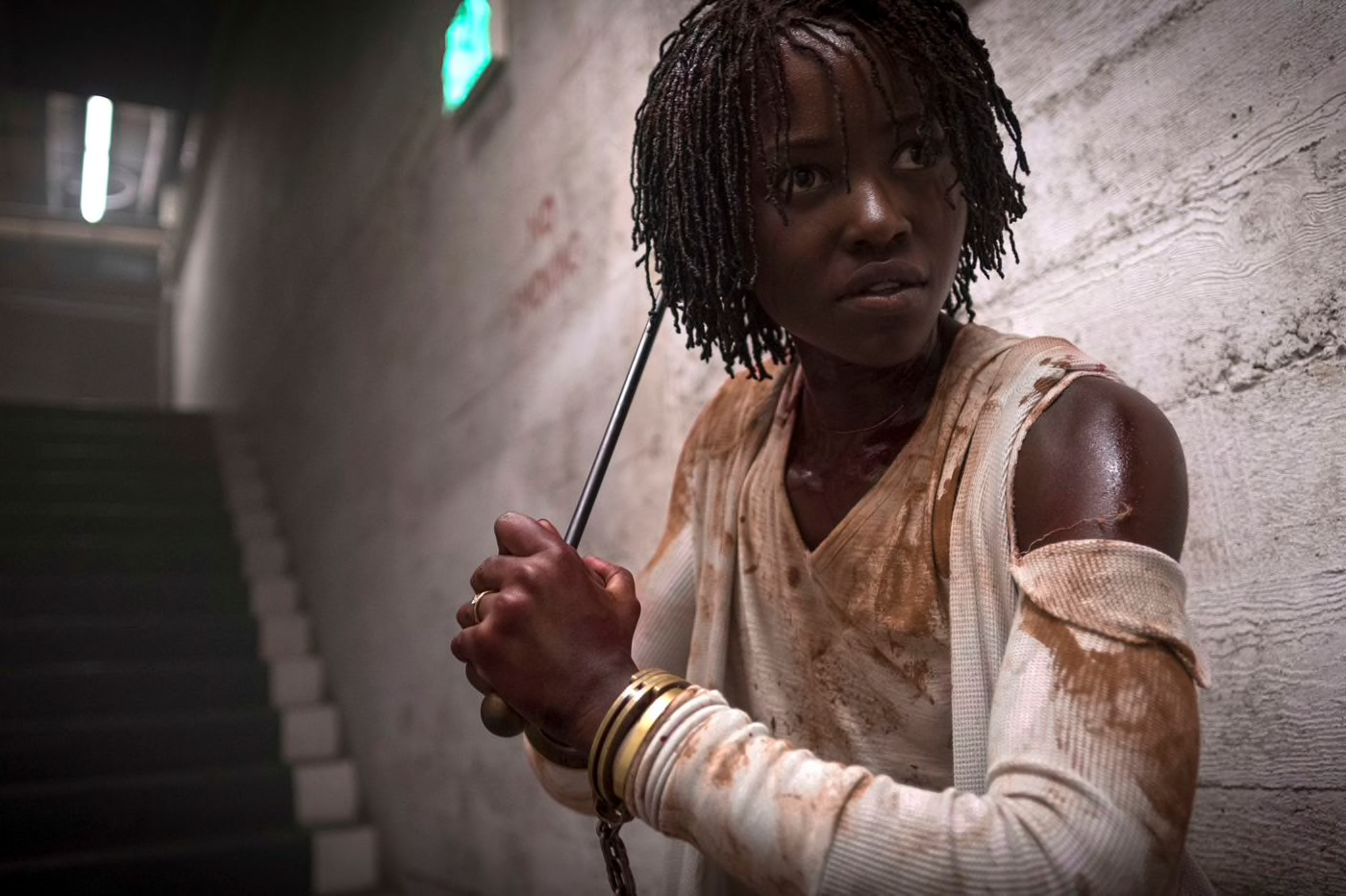 There are many times in life — perhaps especially, as a critic — when you have to admit that you were wrong. “To err is human,” Alexander Pope once said, and I believe that to be true. For me, when I first saw Get Out in theaters in 2017, I recognized it as a strong and promising directorial debut for Jordan Peele. But at that moment in time, I didn’t consider it a great film.

I did find Get Out to be well-made, compelling, engaging, pulpy, and, above all else, a timely horror film, but I was too focused on its imperfections. And, admittedly, I overlooked a few of its triumphs. After reading a number of thoughtful and illuminating think-pieces, listening to a wealth of opinions (including many featured in the exceptional documentary, Horror Noire), and watching the Oscar-winning Blumhouse production rise up the ranks to become, quite arguably, the most iconic, memorable and relevant movie of that year, it’s only more apparent to me now that Get Out isn’t simply a good horror flick. It’ll likely be remembered — perhaps even more fondly in the future than it is today — as an empathetic and necessary work of a blooming filmmaker who was finally given a platform to prove the full extent of his storytelling capabilities. And now that I’ve given the revered film a second look, I realize that the masses were right this time around. It is, truly, a great and gratifying film, not merely a good one. I was wrong to say otherwise.

So, when it came time for Jordan Peele to return with his sophomore feature, there were many people, myself included, who were wildly eager to see what this growing talent would create with his second go-around behind the camera. It was apparent, even upon my imperfect first perception of the film, that Peele was an exceptionally talented and gifted filmmaker, and his clever, carefully-crafted original screenplay was properly given its due at the Oscars for good reason. He was someone with powerful stories to tell, and he was very much ready to share them.

In an age of franchises and sequels, it’s easy to understate how exciting it is to see widespread cultural interest in an original project — let alone an original horror project. Expectations are astronomically high, and while everyone knew Peele was a visual artist with a wealth of ingenuity, there was always the fear of the dreaded sophomore slump. There are countless directors behind acclaimed first films who have fallen short with their second feature, and it’s common knowledge among film lovers that when you rise so high the first time around, you’re almost guaranteed to drop in quality with your second effort. Either anticipation is too high or one’s clout makes everything foggy. Whatever the reason might be, if you hit it out of the park with your first film, there’s a pretty good chance you’ll have to settle for a foul ball the second time up to bat.

There will be many folks who consider Us, Peele’s awaited follow-up, to be a lesser film than Get Out. This is in part because of its deeper lean into the horror genre, as well as Peele’s choice to go into weirder, wilder, darker, and more demented avenues with his aesthetic choices. Given how well-received his first film was, there are surely going to be some people who find Us to be a letdown, if even a minor one.

But for me — perhaps because I’m finally recognizing the greatness of Peele’s new career turn or I appreciate films that go against the grain — I believe Us is, if not just as good as Get Out, perhaps even stronger. A bleak, commanding, captivating, and chilling horror film with more than its fair share of social commentary once again packed inside, Peele’s sophomore is an even more impressive, intelligent, resilient, and rewarding film than its predecessor. Peele knows the stakes are high, yet he moves full throttle ahead past his inhibitions, resulting in a smart, stylish, striking, and sneering second film.

I’ve never been one for plot synopses in reviews. I believe one should go into a film as cold as possible, unless knowing the mechanics of the plot better serves the film at hand. With Us, I believe the less you know about the film going in, the better off you’ll be. But to give you a very brief look at the film, it centers around an affluent, well-to-do African American family that includes Adelaide (Lupita Nyong’o), Gabe (Winston Duke), Zora (Shahadi Wright Joseph), and Jason (Evan Alex), who are trying to enjoy their beach house vacation when, late in the night, they are confronted by hidden figures lurking in the shadows outside.

Gabe tries to scare them away, but he’s unsuccessful, and it’s not long before these strangers break into the house. But the terror comes when the shadows are unmasked, as the family discovers that these home invaders are variations of themselves, only with deep red clothes and other stark differences in their appearances. They are not friendly foes, and if the main characters wish to make it out with their lives, they’ll need to kill their other half. But it’s not so simple, for even before the trip took form, Adelaide was revisited by buried memories from her childhood, which have now come back to haunt her.

The ancient proverb states, “the devil you know is better than the devil you don’t.” With Us, however, Jordan Peele challenges that notion, believing that we can be our own worst enemies when we allow ourselves to be informed by our darkest inclinations. It might seem like a familiar idea at first, but Peele provides a wholly original and entirely riveting spin on this proverb in his newest movie, providing eager audiences with less of a crowd pleaser than his original directorial effort, but one that showcases the full extent of his storytelling talents and how he’s fully willing to utilize the strengths of the horror genre to say something meaningful. If you thought Get Out wasn’t much of a horror film, Us is staring you directly in the face. He isn’t playing around, and he wants you to know it. Also, The Twilight Zone comparisons that could be made before? Expect them to be amplified (Peele’s new adaptation of the classic series premieres on April 1st).

Though one shouldn’t assume Peele’s intentions after viewing Us, it’s certainly intriguing to see a film commenting this strongly on the state of disarray within the United States of America. I don’t believe it’s unintentional that the villainous sides of our protagonists are wearing red, so I’ll leave it at that. But such a simple read might honestly do the movie a disservice. Because to amount Us to being a takedown of the political right wouldn’t properly capture the themes at play. This is undoubtedly a political film, but it’s one of those times where the “both sides” discussion might serve some merit. Because while it’s about politics, no politicians are mentioned and no political parties are disclosed.

Instead, Peele derives his horror from the primal nature of fear itself in Us, focusing on the ways in which the festering evils of the world manifest themselves in the cruelest ways and take form in what we believe to be ourselves, though we know — or, at least, one would hope — that these violent, visceral reflections in the mirror, perhaps even the reflection you see on your phone after you log off your social media account, aren’t the best versions of yourself. But in times of great confusion and massive hysteria, anger becomes a common ally. And we often see red in more ways than one. It’s a message that can seem simple on paper, but it’s told with rigorous attention to details and careful command of story and direction from Peele.

The film’s use of parallels and doubles is outstandingly realized, with well-captured shots often repeated throughout the film and well-addressed motifs revisited in stunning fashion. Jordan Peele knows his movie is a mirror, and he makes sure to reflect everything accordingly. Though it results in a film with more ambitions and audacious ideas than his first film, that’s what makes it so entirely thrilling to watch.

It’s not merely that Peele is challenging himself, but that he is so willing to challenge himself, making sure that his artistic stamp leaves a stronger impression and his (slightly) bigger budget gleams more beneficial benefits from a visual and narrative perspective. The cinematography in this film is absolutely stunning, with excellent use of shadows, color, and lighting to maintain lasting suspense. It’s hard not to be mesmerized by any one frame in this film, and it helps to showcase the growth in Peele’s directing style since Get Out.

Peele’s visual sense was at times inconsistent in his first movie, with some shots being absolutely stunning (The Sunken Place segments might still remain the most gorgeous imagery Jordan Peele has captured for the cinema yet) and others, well, leaving a little bit to be desired — perhaps, or quite likely, due to budgetary restrictions. Additionally, Peele’s balance of horror with comedic elements is much more fluid here. Where in his first film, the moments of levity could come off as jarring compared to the thrust of the main story, they flow gracefully within this particular narrative. It’s clear that Peele is developing and adapting himself as he goes, only instead of becoming his worst self, he’s becoming his very best self at this point. Yes, that might be cheesy to say, but like Jordan Peele, I like a good metaphor when I can use it.

There’s so much to admire and appreciate in Us. It’s a shame, then, that the final twist reveal is so disappointingly predictable. Granted, when I first saw Get Out, I wasn’t quite as taken by the final twist either, though I’ve grown to admire what it means and respect the literal cop out Peele provided his audience in a generous moment of bliss. It wasn’t necessarily the ending that best served his original story, but it was the ending the audience wanted to see and, more importantly, the ending the audience needed to see at that time — and even now, since political matters have only gotten worse since Get Out arrived during the advent of the Trump administration. So maybe I’ll like the ending of Us more upon rewatch. But for now, that’s the biggest fault of the film, in my view, and since it comes so close to the final note, it sticks out like a sore thumb.

It’s evident that Jordan Peele has a lot on his mind here, and in true sophomore film fashion, he is tackling a lot in a compact amount of time. I’ve already disclosed more than I wanted to while gushing about it all. I’m curious to revisit Us, mainly since I know that it’ll either be even better the second time around (fittingly) or it won’t hold up as well in regards to the story mechanics. Either way, I can’t wait to reexamine the latest from Jordan Peele and see what he cooks up next. I might not have recognized it fully before, but I see the greatness with his wicked second film.