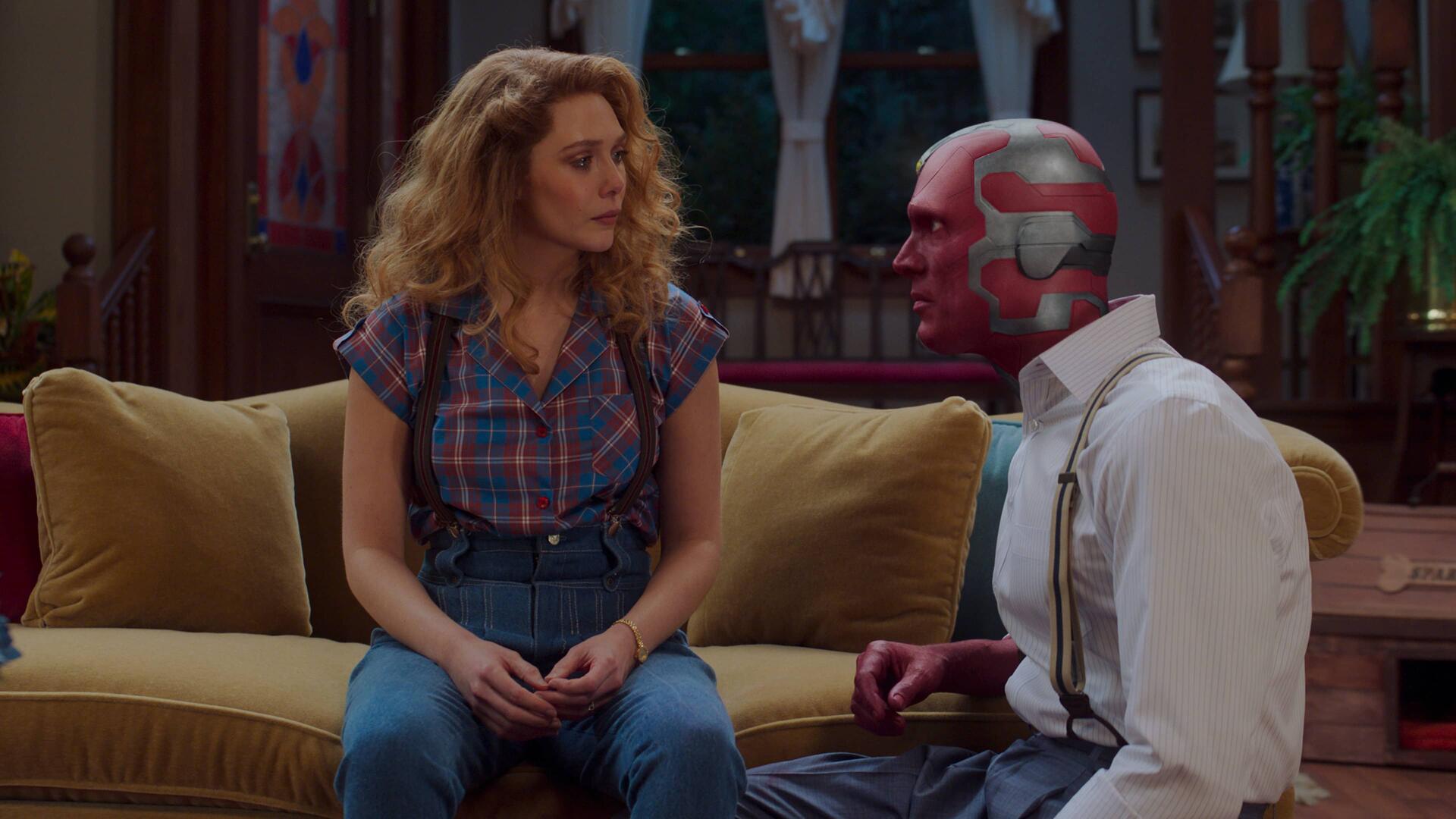 By Adonis GonzalezFebruary 11, 2021No Comments

Hey all, welcome back to your favorite weekly recap of your favorite Marvel streaming series. I’m not sure if either of those statements is true, but if you’re reading this then you probably have some emotional investment in “WandaVision” and my long-winded rambling related to it.

Firstly, I wanted to apologize for missing last week’s episode. I took a vacation to some quiet little suburban town in New Jersey and I kind of lost myself for a while. But now I’m back, and as much as I’d like to say that my face (or, er, words) is the most shocking one you’ll see pertaining to this week’s episode, I’d be lying. Alright, enough setup, let’s get to it.

WARNING: SPOILERS FOR “WANDAVISION” EPISODE 4 AND 5 FROM THIS POINT

Before we dive straight into Episode 5, I do want to discuss just a little bit of Episode 4, titled ”We Interrupt This Program.” Episode 4 revealed quite a bit about what’s really going on in “WandaVision,” including the fact that even in the MCU, it’s viewed as some sort of wacky decade-changing sitcom. This knowledge comes to us straight from the findings of Dr. Darcy Lewis, who longtime fans will remember from the first two Thor films. Darcy is joined by another returning MCU character, Agent Jimmy Woo from Ant-Man and the Wasp. The pair spend the episode trying to determine the source of “WandaVision,” which is currently airing in the town of Westview, New Jersey, a town no one else believes exists and is full of missing persons nobody can seem to remember. They’re also looking for a way to get Monica Rambeau, a.k.a. “Geraldine,” out of the bizarre sitcom world she’s currently trapped inside.

“We Interrupt This Program” takes its title quite literally, taking us out of the “WandaVision” world and back into the “real” MCU. It also reveals a lot about the way this sitcom world works, like how it “rewrites” any matter that comes into it. We see this when the “beekeeper” from a previous episode is revealed to be a very unlucky S.W.O.R.D agent whose uniform was altered.

In fact, the fifth episode of the show — “On A Very Special Episode…” — takes this deconstruction to an entirely new level. Yet it also manages to amp up the sitcom appreciation simultaneously. The episode starts very similarly to the others (with the exception of Episode 4). Wanda and Vision are in a new sitcom setting, this time inspired by “Family Ties” and a bit of “Full House,” which, in case you were wondering, is technically an 80s sitcom, too. The couple are having a rough time adjusting to their new life as parents, even with help from their cheery neighbor Agnes. Unlike previous episodes, this one wastes no time in getting really, really weird.

After what seems like a botched line or some sort of mess up, Agnes suddenly breaks character and asks Wanda if she would like her to “take it from the top.” Her voice is shaky and her demeanor has noticeably changed. But given how the last person to break character was forcibly exiled from Westview by Wanda (more on that later), it makes sense why Agnes is frightened.

Of course, everything goes back to normal almost immediately after Agnes’ moment, something that Vision actually makes note of this time around. Despite his efforts to talk with his wife about it, Wanda seems understandably ready to ignore the situation entirely. Their argument is interrupted by the sudden magical aging up of their sons, Tommy and Billy. The twins go from babies to actual five-year-olds in the blink of an eye, confirming that they’ve inherited at least some of their mother’s magical abilities. This aging up process happens again later on, which likely means we’ll have a full grown pair of metahumans in the foreseeable future.

Elsewhere, Monica Rambeau is still recovering from her encounter with Wanda and Westview. Now that she’s experienced the sitcom world firsthand, she, Jimmy, and Darcy are determined to discover why Wanda is doing all this. Despite her run-in with Wanda however, Monica doesn’t believe the former Avenger is doing anything out of spite or with malicious intent. The jury’s still out on whether or not she’s right about that.

Especially after it’s revealed that Wanda broke into S.W.O.R.D before the events of “WandaVision” and stole Vision’s corpse in order to reanimate him. Necromancy being an activity superheroes don’t usually partake in. Couple that with the earlier discovery by Vision that all of the townspeople are under her mind control, and it certainly seems like Wanda isn’t exactly in the right state of mind. However, Wanda does mention later on in the episode that she isn’t sure how Westview came to be, a statement that may ring true and make any subscribers to the “Mephisto theory” pretty happy.

Episode 5 of “WandaVision” seems ready to completely rip open the barrier that separates Wanda’s world from the world of the MCU. I mentioned in a previous recap that I was going to be a bit sad to see the weekly sitcom tributes go. They were charming and extremely thoughtful, but it was clear from the start that they couldn’t and wouldn’t last forever. However, it seems that the show has found a very happy medium, at least for the time being. The world of “WandaVision” is falling apart more and more, and now that Vision is aware that something isn’t right with his new life, there’s no going back. But as we saw in this episode, Wanda is still fighting. She’s using sitcom cliches and plotlines as distractions for both her and Vision, and she’s not ready to roll the credits just yet.

All of these shocking revelations and twists are all leading to something, but perhaps the most surprising one comes at the very end of the episode, because damn do we love cliffhangers. If you haven’t seen the episode and you still managed to read through everything above this, I would strongly advise you to go watch it and then return to this part of the recap/discussion. But I’m not your parents, or a morally-questionable sorcerer holding you captive against your will, so it’s merely a suggestion.

After the boys age themselves up again and experience loss in the form of the family dog’s passing, it’s time for a family talk between Wanda and Vision. This talk quickly escalates as Vision grows more suspicious of Wanda’s actions, but it’s quickly halted by the arrival of a new-yet-familiar face in Westview: Pietro Maximoff.

Pietro, also known as Quicksilver, has had his return hinted at for the last few “WandaVision” episodes. Ever since he was killed in Avengers: Age of Ultron back in 2015, fans have been wanting him to come back in some way. And while Marvel has been pretty adamant in the past about his resurrection, it looks like they’ve loosened up a bit.

Of course, the return of Quicksilver comes with a twist, as he isn’t being portrayed by his original actor, Aaron Taylor-Johnson. Rather, Marvel shocked viewers when Wanda opened her door and in stepped Evan Peters, seemingly reprising his version of the character from the 20th Century Fox X-Men franchise.

While Taylor-Johnson did a stand up job in the role initially, this decision does make a lot of sense when you think about it. After all, Disney did secure the film rights to Fox and along with it their existing properties; the X-Men included. Evan Peters effectively cemented himself as the “real” Quicksilver to fans with his previous portrayals, so rather than recast entirely or have two versions of the same character running around, Marvel decided to stick with the popular choice. But it’s more than that.

Marvel has essentially fixed a big issue of theirs moving forward: retconning. With properties like Spider-Man, X-Men, and The Fantastic Four now under the MCU umbrella, Marvel has to do quite a bit to explain where these new super-powered characters are coming from.

It’s been theorized for a while now that the more magical individuals of the Marvel universe would likely have something to do with it, along with some good old scientific mumbo jumbo (time travel, quantumverse, the usual). But now it seems clear that the key to all of Marvel’s future endeavors will be Wanda and her insanely powerful abilities.

It hasn’t been confirmed whether Evan Peters is playing his version of Pietro, or if he’s simply “recast” as the one from Age of Ultron. But given how Marvel chose to keep him, it’s likely Peters will be portraying the same version of the speedster we saw rocking out to Queen in X-Men: Apocalypse.

Beyond finally reuniting the Maximoff siblings, this may also mean that Wanda’s powers are more limitless than we’d assumed. If she was able to pull a different version of her brother, one we know is from a different universe, who’s to say she won’t do it again? This could explain how “WandaVision” is supposed to tie in with both Spider-Man 3 and Doctor Strange in the Multiverse of Madness.

But regardless of it’s purpose in the grander MCU, “WandaVision” really is a treat so far. The charming sitcom love, the bone-chilling moments of suspense, and Marvel’s remarkable storytelling all come together to create a pretty entertaining and thought-provoking series on Disney+. I can’t wait to tune in next week.